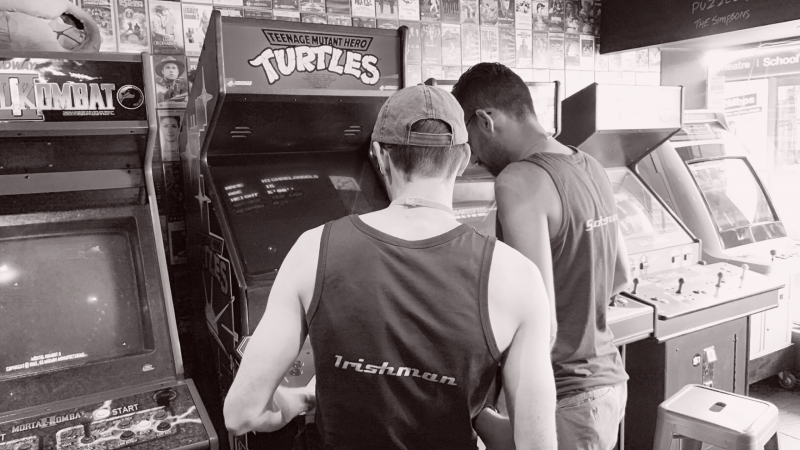 Split Screen is a blog about videogames, movies, friendship and life, by Alan Williamson and Craig Wilson.

Founded in 2010, our aim was to create a ‘different’ games blog… just like everybody else. We eschewed the traditional notion of news, reviews, and all that bullshit we don’t want to write and you don’t want to read. Over the years, we’ve brought you features like Metacritique, our annual Screenies, Retrocity, the long-running Reality Check series, our not-award-winning-but-we-still-like-it podcast. We are now a lot older and a little wiser.

We launched the videogame culture magazine Five out of Ten in 2012, but Split Screen is the place that started it all. It’s our home. Alan (as written by Craig)

To say that Alan is like a simile making machine addresses only one aspect of his skilled writing I’ve enjoyed for several years now.

But in truth his insightful, witty writing is no longer what impresses me most. Since I first met this young scrappy, tech writer (shortlisted as Best Critic in Guardian’s Student Media Awards in his day) I’ve witnessed the evolution from student writer to student editor to website founder to magazine founder to published book author to invited speaker attending national videogame conferences to invited speaker who can’t attend international videogame conferences to apparent illuminati member.

What impresses me most is his staggering creative output has never dipped in quality. I don’t know where he gets his energy from or why that amount of coffee hasn’t killed him yet. Craig (as written by Alan)

Whether it’s recording music, beautiful page layouts, or forging info-graphics from tenuous correlations, Craig Wilson is a modern renaissance man, even if he stubbornly uses Photoshop CS2 when I’ve paid for Creative Cloud. Maybe he’s just a regular renaissance man – what version of Photoshop did Da Vinci use, again?

He’s an imaginative and resourceful guy: he will often disappear for a few hours and come up with a stunning Five out of Ten layout that is life-affirming and humbling. He can always be relied on to find a time wasting YouTube link from the seventy open web browser tabs on his laptop. Luckily, Craig doesn’t really like videogames, and so he has never realised his talents to outright dominate Split Screen.

Craig has a Masters in Physics which he uses in his day job as an arms dealer, designing orbital lasers and other futuristic weapons. His only known weaknesses are bacon and orange juice.

If you’re old school cool and still use an RSS Reader then our feed is https://split-screen.net/feed.

Let us know if you can’t find us on your preferred RSS app and we’ll sort you out.

Get in touch by emailing our first names at this domain.