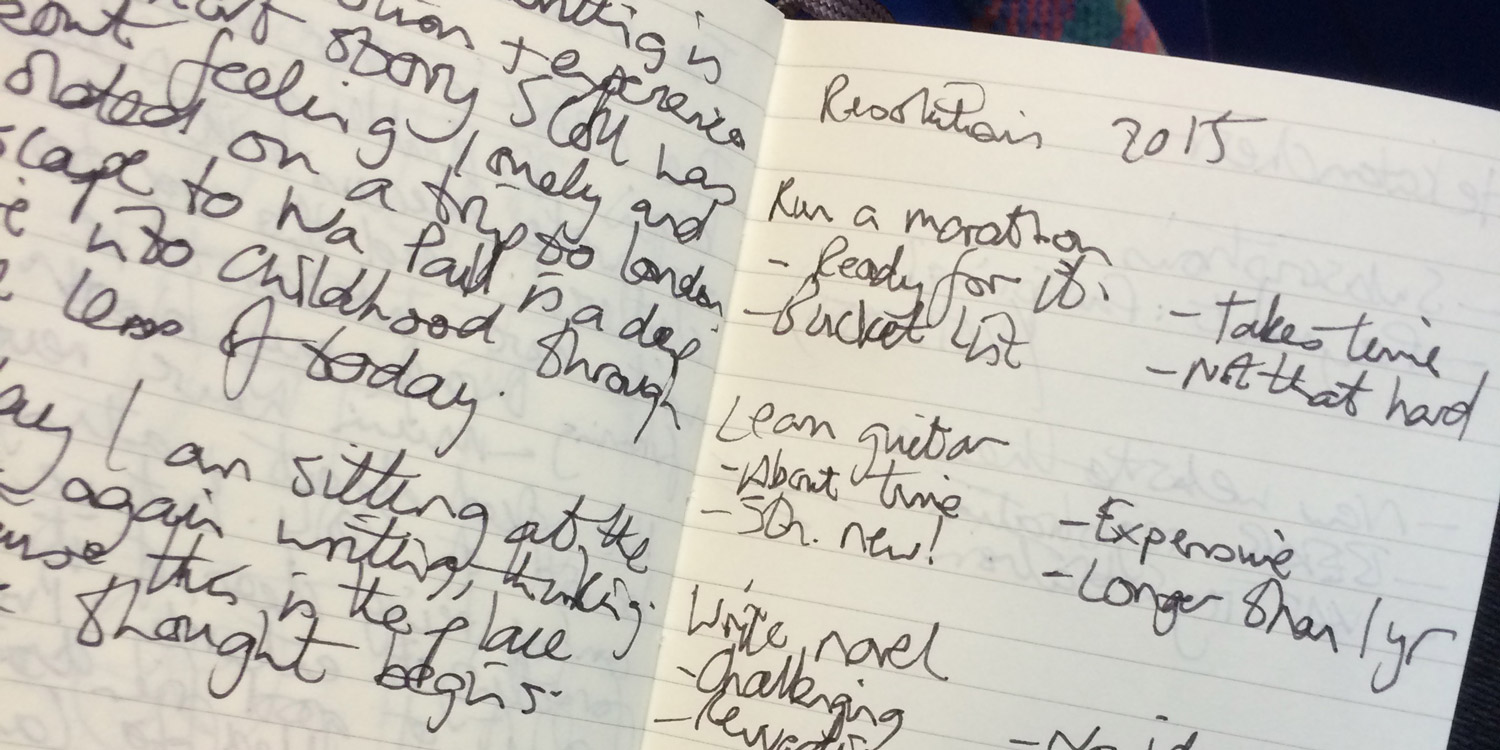 I unapologetically love New Year’s Resolutions. The new year is a great (albeit arbitrary) time to take stock of your life, evaluate how things are going, and decide where you want to be a year from now. Resolutions are the perfect way to focus your efforts into clear goals, but often people come up with woolly wishes instead. I asked a friend if he had made any and he said “Get fit. The end.”

But how do you go about getting fit? What you really want are SMART objectives: specific, measurable, achievable, realistic, and timely. A better, SMART-er resolution than “get fit” would be “I want to be able to run five kilometres in thirty minutes by the end of the year”, and that’s what I suggested to my friend.

While on my way to a New Year’s lunch, on a wet post-Hogmanay afternoon in Edinburgh, I scribbled down my resolutions into my little Moleskine notebook. I went through them with my friends, and when deciding which to choose, I went for… all of them! Naturally, there are lots of other things I want to do this year, but things like “go paperless” and “write a journal every day” are not that big a deal. So instead, I have resolved to complete some substantial goals that are not part of my usual life stuff.

Run a marathon in under four hours

In 2014 I ran a half marathon in 1 hr, 41 mins, which is a new personal best. My running performance has been strong over the past year, and the logical end point is to run a full marathon. My friend and old running buddy Andy suggested a target of four hours, so that’s an average speed of 10.5km/h (compared to 12.41km/h for the half marathon), which I think is a reasonable target. After that, I guess I’ll have to learn to swim and train for a triathlon.

The ‘Four Peaks’ are Ben Nevis, Scafell Pike, Snowdon and Slieve Donard. According to this website, climbing them all would involve 43km of mountain walking and 4256m of ascent. The Four Peaks Challenge involves climbing them all within 48 hours – “24 if travelling by helicopter” – but I’d like to climb them at a more leisurely pace of ‘whenever’. Ben Nevis is by far the most challenging, as ascending it is dependent on good weather as well as fitness.

The incentive for climbing the Four Peaks isn’t fitness: it’s to spend some quality time with friends and visit a bit more of the neighbourhood. Also, I can see Slieve Donard from my dad’s house, so hopefully we can have a barbecue and some beers there to finish off the tour.

Learn to play the guitar

Ironically given the previous resolution, the electric guitar is my Everest. When I was sixteen, I got my first summer job, and spend a lot of the earnings on a crappy left-handed guitar. I later sold that guitar and bought a right-handed Squier Stratocaster with a lovely sunburst finish, which currently serves a decorative purpose in my room. Now it’s time to learn to play this thing.

I reckon if I put aside fifteen minutes every day, I can get the hang of it in a few months. My goal will be to play a song by the end of the year, and I’m not telling which one, but it’s not Smoke on the Water. I’m also planning to play my saxophone more often, but I am not resolving to do so.

This is the most hazy of the four resolutions. I’d like to learn something new, and I can already program in Perl (if I’ve got stacks of documentation in front of me and am being held at gunpoint). I plan to subscribe to Lynda and learn more about Lightroom, Photoshop, Premiere and After Effects, but I think learning a programming language would be something different, fun, and intellectually stimulating.

The problem with learning Perl or Python is that I don’t have much practical use for them, so I’m thinking of a language that can make “real” apps like Swift. Although if Marko is reading this, he’ll probably tell me that Swift is rubbish.

One of my original hand-scrawled resolutions was “write a novel”, which is the ultimate writer’s cliché, and clichés are a bad way to start a novel. My single resolution for last year was “write a book”, which I completed in June. Hooray!

I have the drive to write something, but I’m not sure what. It might be a collection of shorter stories, or a compilation of long-form blogs, or even a work of interactive fiction. But it’s a bad idea to have a resolution that’s mere wishful thinking, and it’s a terrible idea to resolve to write a novel without an idea for one, so this is just a note to myself to say “don’t lose sight of your dreams, but don’t pin your hopes on them either”.

Right, I’m away off to do all that. When I reach the UK’s lofty heights, I’ll bring my camera with me. Friends can add me on Runkeeper and risk being shamed into exercise. As for the others, we’ll just have to wait and see. Hopefully I have convinced you that resolutions aren’t a load of shit, as long as they’re smart (or SMART) and you keep them in mind throughout the year. It’s nice to set goals for yourself, and it’s a great feeling when you achieve them.