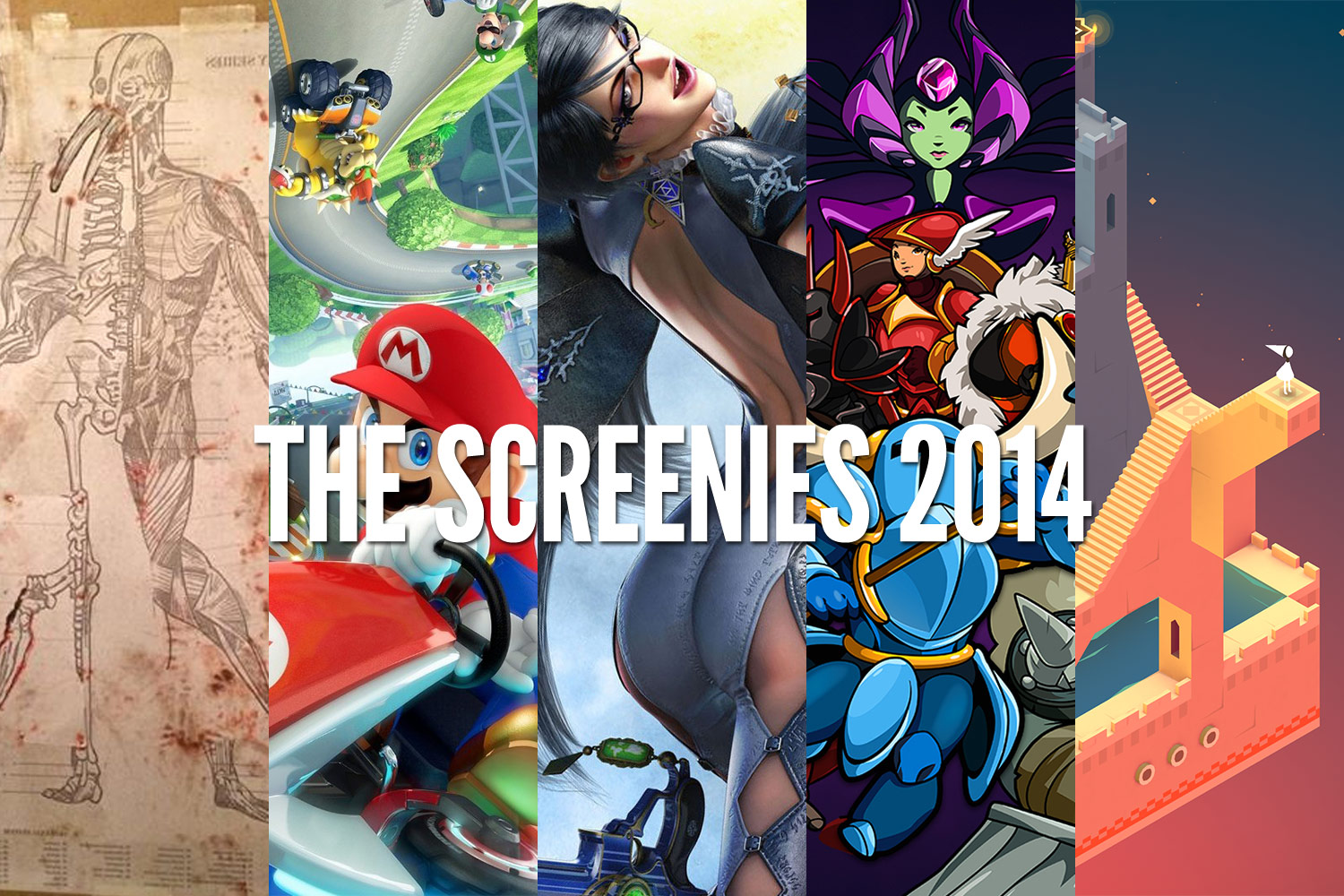 It’s the end of the year, so once again we’re neglecting spending quality time with our families to bring you our pick of the best stuff of the year! Welcome to the fifth annual Screenies! But first, an apology…

Alan: Back at the inaugural Screenies in 2010, I gave the nod to Mass Effect 2 for the best game of the year. This was a mistake, and the correct answer was Bayonetta. Mea culpa. I judged the 2010 Screenies a couple of days after finishing Mass Effect 2, and its amazing ‘suicide mission’ was fresh in my memory. Then in the four years that followed, I played another thirty hours of Bayonetta.

Both are among the best games of all time, but Bayonetta is just that little bit better. So there you go – let’s all move on with our lives. (What do you mean “I already did”?)

Craig: Justice is served! Finally. I still chalk up Mass Effect 2 winning the coveted Screenie because of the primacy/recency effect. Book of the Year: Steven Pinker, The Sense of Style

Alan: The fact that we’re even awarding a Book of the Year prize this year is testament to how much I loved The Sense of Style. Steven Pinker is a writer of rare explanatory talent, and he’s the perfect guide to understanding language through the lenses of evidence and common sense. The Sense of Style is insightful and delightful from start to finish: the practical advice is easy to follow, but even the sections grounded in cognitive science and linguistics are explained with Pinker’s usual exceptional clarity.

This is a book for people who care about writing. If you care about improving your own writing, you owe it to yourself to read The Sense of Style.

Runner Up: Escape to Na Pali: A Journey to the Unreal, Kaitlin Tremblay and Alan Williamson

Craig: I have no shame in giving this runner up award to Kaitlin & Alan for their debut book. It’s an actual, real-life book and there’s a goddamn ISBN number on the back. So sexy.

The reality is that there wasn’t any other book in 2014 with which I had this kind of connection. Escape to Na Pali is best read in conjunction with playing Unreal (which is avaible dirt cheap on GOG.com). Playing through each chapter of the book is a mix of developer commentary and player commentary as the author’s ruminate on what Unreal meant to them back when they first played and what Unreal means now in the context of modern games.

Alan: Shovel Knight isn’t an ‘8-bit game’ pitched at a modern audience: it’s a modern game pitched at an older audience. While it takes design cues from some classics of old, most notably Super Mario Bros 3 and Mega Man 2, it’s influenced by modern design sensibilities. It knows when to challenge the player, when to break up the action with an unexpected set piece, how to make them laugh. Yacht Club Games’ deep understanding of classic videogames allows them to subvert our expectations – and often exceed them. Shovel Knight is a game with a heart of gold, a twinkle in its eye, and a well-worn shovel in its hand. The Best ‘Game of Last Year’ of the Year Before: The Simpson’s Tapped Out, EA Mobile / Fox Digital

Craig: The single greatest accolade that any game can receive is to be the one current release that I played this year. But I tend to play games that came out last year. But even that didn’t happen this year.

Instead I spent all year – ALL YEAR – tapping away at a freemium game that came out in 2012.

Alan has no idea how deep this rabbit hole goes…

Read my twelve-month journey into depression, denial, addiction and redemption in the full review. Alan: There’s an unhealthy obsession with ‘replayability’ and ‘value’ in videogames, when many of the best films and books I’ve enjoyed made such an impact on first appearance that I don’t want to diminish them with repeat exposure. As explained in our review, Monument Valley is so enjoyable on the first playthrough that you won’t need a second – although with a newly-released expansion pack, there’s more than enough to explore. Monument Valley is a wonderful game in its own right, and a great example of how mobile games are no longer second-class citizens.

Alan: 80 Days is one giant leap for interactive storytelling. It’s not a game about planning navigation strategies or resource management: it’s about creating a story through your own intuition, taking that feeling of being almost-but-not-quite in control in Telltale’s The Walking Dead and ramping it up. 80 Days is a game of uncommon intelligence, intrigue and good humour that everyone will enjoy.

Craig: The greatness of Tusk is in the journey and not the destination.

The film started as a hoax post for a room for rent in Brighton, England on the UK listings site Gumtree.

From there it led to Kevin Smith and Scott Mosier joking on the SModcast podcast about the strange request in the ad: dress as a walrus for two hours a day and you live rent free.

From there we can listen to their long conversation about the oddities of a man dressing as a walrus morph into outlining a horror film wherein one man turns another man into a walrus. Episode 259: The Walrus & The Carpenter captures the very moment, the very second, where the sparks fire in Kevin Smith and he thinks “this could be a movie”.

From there it led to online support through #WalrusYes and quickly thereafter to a script, funding, casting, pre-production and on-set filming of a movie that shouldn’t exist. And all within a year of that first hoax post.

Tusk is a testiment to chasing whimsy and pushing an idea to see how far it goes. I find it magical that a joke between friends ends up with Johnny Depp playing a Quebec detective, Michael Parks giving a magnificient performance once again and poor, poor Jason Long going full Walrus. Game of the Year Runner Up: Mario Kart 8, Nintendo

Alan: Mario Kart 8 is the best Sega game I’ve played in years. It’s got the blue skies, slide guitars and high-octane thrills of the Sega arcade classics of old, with a degree of polish only Nintendo can deliver. It’s easily the best Mario Kart game ever made – Mario Kart Wii feels positively decrepit after playing this – and one that succeeds based on sheer panache rather than warm fuzzy Nintendo memories. The driving is all that really matters, and it’s outstanding whether you’re on a kart, bike, hang-glider or flying upside down on an antigravity track.

Of course, when Mario Kart 8 does evoke Nintendo nostalgia, it’s absolutely glorious (even if you’re a Sonic fan!). Every track is a gleaming high-definition gem, and the Hyrule Castle DLC course injects just enough Zelda lore into the game to delight fans with degrading the proceedings into Super Smash Kart. Alan: I’d have been shocked if Bayonetta 2 were a bad game, but I was just as pleasantly surprised that Platinum have done it again. Bayonetta 2 doesn’t do things drastically differently from its predecessor, but it refines the action in subtle, meaningful ways: better weapons, a more diverse cast of enemies and environments, none of those rubbish QTEs, and a new ‘Umbran Climax’ move that’s the perfect counterpart to ‘Torture Attacks’. Even more vibrant and outrageous than before, Bayonetta 2 is a game about what it feels to be truly connected to a character’s motion, what happens when the wall between controller and input breaks down and you become engrossed in the flow of action, an astounding kinetic ballet that gets better and better with every hour you put into the game.

I completed Bayonetta 2 a few days before leaving my Wii U in Oxford over Christmas. It’s absolutely my favourite game of the year, but is it even better than Bayonetta? That’s a tough question I hope to answer when I’ve played through it on the harder difficulties, so the easy answer is: buy the double pack ‘Special Edition’ and play through both.

If you hated Bayonetta, you’ll hate Bayonetta 2, but what I love about it is that it doesn’t give a fuck what you think (incidentally, I’ve heard “fuck” uttered more times in this than every previous Nintendo game combined). It’s a love letter to fans of ‘stylish action’, to ostentatious Japanese creativity, to gaming itself. Why drag yourself through another brown warzone when you can fight a giant luminous manta ray, wield a warhammer against an angelic warrior whose face is mounted in its own sword, battle through Heaven and Hell and back again?

Bayonetta 2 is apotheosis of the genre, and possibly the medium as well. Buy yourself a Wii U, the game and a nice Pro controller (they’re cheaper if you import them from Japan), book a week off work, and savour every minute of it. And yes, it’s better than Mass Effect 2.