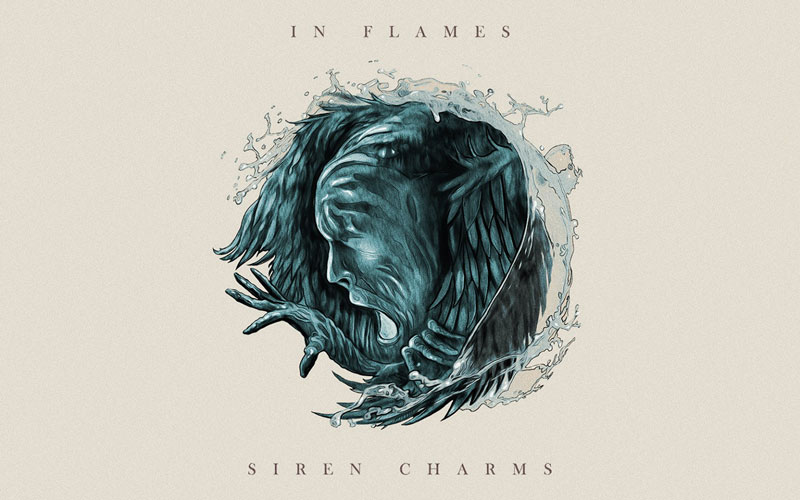 Siren Charms is a moving exploration of the follies of love, recorded by one of Sweden’s most prominent melodic death metal bands. If the end of that sentence makes you wince, or reach for the little X at the top of the browser tab, relax! In Flames have mellowed since the release of The Jester Race in 1996,  a now-classic album in the ‘Gothenburg style’ of Scandinavian metal. They took the duelling guitar melodies of Iron Maiden and injected some Swedish folk influences, faster and heavier drumming, and the growls of death metal. It’s an acquired taste.

Once your palate adapts to spicier tastes, what previously seemed exciting becomes bland. Like many metal bands, In Flames have refined their more acerbic nuances in recent years and their later albums are much more accessible. There’s still a distinct Gothenburg sound – a noodly-oodly guitar solo begging to be mimicked with an air guitar at home, screamed vocals that convey extremes of emotion – but Siren Charms is probably their first album I could play in my dad’s car without (much) protest. That creates a natural backlash from ‘metalheads‘, second only to ‘gamers’ in their neverending quest to define themselves as the most ‘hardcore’ and socially outcasted. I remember going to an Opeth gig in Edinburgh a few years ago, when they toured in support of Heritage. Between songs, a disgruntled metalhead roared: “PLAY SOME FUCKIN’ METAL!” Some people just want to hear some fuckin’ metal, but bands who do not evolve their riffs are doomed to repeat them. While Opeth have gone full-prog (they always were quite proggy / jazz fusion), and Iron Maiden’s songs grow longer and more thoughtful with each release, Megadeth seem to re-record the same album in a less interesting way every couple of years. You could say the same of Bad Religion, one of my favourite bands, but as I said to my brother “all of their songs sound the same, but at least it’s a great song!” Your favourite old albums are not tarnished by new releases in a different style, and I’d rather enjoy Rust in Peace for a hundredth time instead of listening to a pale imitation by the same band.

Siren Charms deserves to be approached with an open mind. In fact, it demands it, since from the opening track “In Plain View” the intensity of the opening lick gives way to a more subtle riff, Anders Friden sounding more vulnerable than you’d expect:

A fire, my head’s a liar
in plain view, there’s nothing in the way

Friden has never been the best singer – understatement of the year – but he’s certainly among the most interesting lyricists in metal. Here’s “Embody the Invisible” off 1999’s Colony, which I also chose because it’s one of my all-time favourite opening tracks:

The difference with Colony is that you’ll need to look up the lyrics to extract meaning from the screams, while in Siren Charms Friden’s vocals are more intelligible. Even the more traditional vocal styles of “Everything’s Gone” or “When the World Explodes” occupy a middle ground between singing and shouting. It lacks the sheer oomph of earlier In Flames, but it’s not really better or worse. It’s interesting. It sounds more earnest, less posturing, which is probably a good thing when you’ve written a breakup album.

I tried to contact the band to talk about Siren Charms: I emailed their manager in Sweden, went through the fan club, even contacted the press team at the O2 Shepherd’s Bush (the photos accompanying this article were taken by me at the recent London gig). Song lyrics are often deliberately ambiguous, and you don’t want to read into them too much, but it doesn’t take a lovesick and introspective writer to figure out the meaning behind a song like “Paralyzed”. Even the title Siren Charms refers to the creatures of myth who lured sailors to their deaths: my trusty Apple dictionary says “a woman who is considered to be alluring or fascinating, but also dangerous in some way.” Putting thousands of years of sexism to one side, I think we can piece this together. The album presents an omnibus of emotions: that moment of clarity that cuts through the thick fog of insane infatuation (“In Plain View”, “With Eyes Wide Open”), the self-pitying and regret (“Through Oblivion”, “Siren Charms”), through to catharsis (“Rusted Nail”) and eventual optimism. (“Dead Eyes”). “Rusted Nail” is a highlight, the closest thing to a classic on the album: it punches hard from the outset, moving to troughs of gritty chugging into a noodle-oodly bridge that you want to mime with your air guitar and a chorus destined to strip vocal chords in stadiums. It’s a microcosm of the album as a whole: both recognisably In Flames and recognisably distinct as a progressive work as well, following the path taken by the underrated (and terribly named) Sounds of a Playground Fading.

Siren Charms is emotionally mature and intellectually honest. If you are neither of these things, you’ll probably hate it, and even if you are this isn’t a breakthrough album to convert the unconvinced. But it’s really good, often moving, and it’s definitely fuckin’ metal.