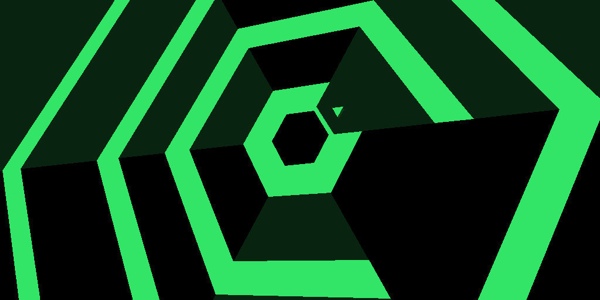 I cycle to work every day. There’s a steep downhill slope on the route: I like to fly down it as fast as possible. As I reach maximum velocity I can feel the air passing through the vents in my helmet. The vibrations of the bike tyres on the tarmac resonates with the frame, my body. There’s a surge of adrenaline. I brake as late as possible before I reach the gate at the foot of the hill. I haven’t died yet.

I knew something was special about Super Hexagon within the first five seconds of playing, because within the first five seconds I had lost. Five seconds later, I failed again. And again. And again. There’s practically no downtime. You can play again as fast as you can tap your eager thumbs against the iPad’s screen, and I can tap my thumbs pretty damn fast when I need to. It seems ludicrously hard at first, your poor little triangle crushed under the neon bricks being dragged into a hexagonal abyss. It’s unfathomable how anyone can play this. It’s stupid. It’s funny! You’re laughing at the relentless difficulty. You’re laughing at your ineptitude. There are only two ways to move around the eye of the geometric storm, and neither direction seems adequate. Your thumbs aren’t nearly so fast now.

Eventually you get past the first ten seconds of play and reach a new ‘level’. The maze shifts into increasingly deadly patterns: the hexagon in the centre morphs into a pentagon or a square, bricks form slaloms or collapsing stars. Try to scan the outside of the screen for upcoming obstacles and you’ll clip something in the centre; try to focus on the triangle and you won’t be able to react fast enough to a tricky pattern. There is no hope, only relentless danger. So you keep on trying and dying. After the first few deaths, you won’t even think about hitting the pulsing ‘Play Again’ button. It becomes a reflex. You wonder how your lunch break disappeared so fast.

There are three different patterns of increasing difficulty: Hexagon, Hexagoner, Hexagonest. In Hexagonest, the obstacles move at such comic velocity it makes the other patterns seem pedestrian by comparison. That’s the key to success: when you go back into Hexagon mode (the lowest difficulty description in Super Hexagon is ‘Hard’), you now know it’s not a superhuman task. You start to see larger patterns and learn how to react to them. Your eyes skim the edges for gaps before they appear in full view. You pull the iPad back a bit and relax: you get less excited when you reach the ‘Square’ stage, it becomes familiar territory. You’ll still fail constantly, and although your progress isn’t saved beyond a record of your best survival time, you’re chipping away at something intangible- something you can’t quite define, more than just an increasing score. It’s something you just… feel. At times, it becomes an elaborate finger dance: you can learn some of the moves, but you also need to be good at improvisation.

Part of the joy of Super Hexagon is the chiptune soundtrack by Chipzel. It cleverly cuts out the music as soon as you fail; the only way to hear it is to keep playing. It’s exhilarating to hear new melodies because you know you’ve also reached a new high score: your success is rewarded immediately through auditory feedback. As you move through the stages, Jenn Frank passes on terse geometric encouragement. It’s like my friend is inside my iPad, cheering me on. What could be better than that?

Eventually, I survived for sixty seconds and ‘completed’ the Hexagon stage. I felt eight seconds of the purest joy I have ever experienced in a game. That’s not hyperbole: it’s the truth. “Wonderful”, said Robo Jenn. She was right. Then I worked through the rest of the stages until I’d achieved slightly less humiliating scores. I bought three more copies of the game for my brothers. I hope one of them loves it half as much as I do.

I don’t expect them to love it as much as I do: that would be unrealistic. I can’t stop playing Super Hexagon. I won’t bring my iPad into work on Monday because it’ll be too much of a temptation. I only stopped playing it because I drained the battery. Do you know how long an iPad’s battery lasts? That’s like drinking all the milk out of a cow. My thirst for this game is unquenchable. As the goals you achieve are so subjective and arbitrary, there’s no sense of completion, only microscopic incremental development. That’s what makes it so enjoyable, and dangerous. I think.

I’m sucked into a flashing hexagonal vortex, surfing the edge for as long as I can. The patterns move faster and faster. I am in The Zone. As we reach maximum velocity, the chiptune beats flood my brain and the feeling of elation resonates with my body. There’s a surge of adrenaline. I am The Zone. There are no brakes. I have died again.