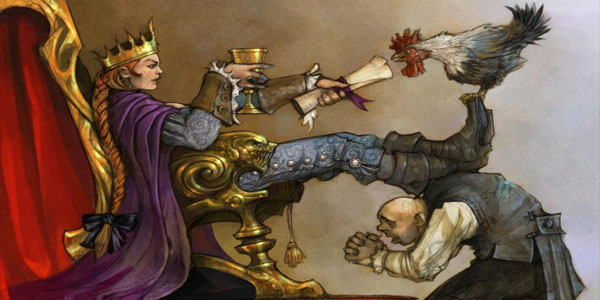 King for a Day

Save the baby, eat the baby: Fable‘s moral decisions were always a binary choice. “Who will you become?” was the grandiose marketing slogan for Fable II:  there’s never been such a disappointing let down as realising, despite Lionhead’s infamous promises to the contrary over the years, that you can only really be a purely good or evil character. You will become either a do-gooder or devil and what’s more, you’ll probably have a good idea of which path you’ll walk before you’ve even opened the box.

Fable III neatly sidesteps this problem by not offering a choice. You are no longer a nondescript teenage orphan, ready to be forged by the player’s will. You are the prince (or princess if you so choose), your brother is a tyrant king, so you’d best go off and start a revolution to overthrow him. While some may relish the idea of a more structured experience and predetermined destiny, for those who enjoyed Fable II‘s blank canvas approach to storytelling it comes as a shock. When you’re pitted against your brother, who is evil, you’re good by definition. Even hearing the player character speak was a bit off-putting: if ever there was an occasion for a silent protagonist, this was it, especially when his voice acting is rather tepid.

There is an overwhelming sense of familiarity in Fable III. At first glance, it’s difficult to tell what is different from its predecessor; scratch the surface and you’ll find that your initial reaction was an accurate one. The combat is still controversial fun, emphasising accessibility and fluid fighting at the expense of a challenge. It has been refined to an extent, with cinematic camera swoops to accompany a particularly satisfying kill. I loved the fights in Fable II and how they made one feel effortlessly heroic, and I still love them now, but when you finish the game without ever being knocked down it does raise questions as to how death-defying your quest really was in the first place.

New additions are spell weaving, which lets you combine two spell gauntlets to create electric death storms and flaming ghost swords, and weapon evolution. The shape of your weapon is uniquely altered based on the actions you carry out over the course of the game: these are, unfortunately, mere superficial changes. What’s really bizarre is that my sword ended up looking like a ‘legendary’ weapon I picked up in a shop- you can’t beat a two-for-one legendary weapon sale- which says a lot for their lack of personality. All new heroes have one big problem: lack of coin. The easiest way to gain money is through menial labour, such as pie making or playing the lute. These are repetitive rhythm action segments with occasional crippling slowdown, which is the not the sort of feature you want in sequences dependent on reaction time. There’s not enough cash to be had from completing quests and so you’re forced into mind-numbing employment to scramble onto the property ladder, where as a landlord you’ll quickly start raking in cash by exploiting your tenants. It’s just like real life.

The meat of the adventure is not in the pies, though. Your journey takes you through the forests, swamps and snow-topped peaks of Albion, as well as the refreshingly beautiful desert land of Aurora. It’s still an enchanting place to explore, filled with secret areas and collectables: noteworthy are the possessed garden gnomes wedged into hard-to-reach crevices that pithily taunt your attempts to track them down. One of Fable‘s traditional strengths has been the telling of its tale, and this instalment doesn’t disappoint. It is a genuinely funny game, witty and written with flair throughout. A particularly good side quest shrinks the hero and places them inside a Dungeons and Dragons-esque role playing game, complete with three hooded nerds narrating the quest that you can see over the horizon of the tabletop. It takes pot shots at modern video games and their narrative, but I can’t help feel these stones are being thrown from inside a glasshouse at times.

It’s the variation and exploration that will keep you going. Computer games are ultimately pointless diversions, but every action in Fable III feels inconsequential: it’s a whistle stop tour of Albion, gathering a tame uprising, taking in the sights and pausing to snag the odd silver key. The main story just trundles on to its predictable conclusion, far sooner than expected. It’s like playing a game written by Terry Pratchett, if he was forced to use the plot of a Mr Men book and only allowed to write humorous segues between major story events. The potential of the writing, combined with a stellar voice-acting cast including Stephen Fry, Michael Fassbender and Zoe Wanamaker, is squandered by the trivial situations in which the characters find themselves.

Once you become ruler of Albion, the game speeds towards a conclusion that fails to satisfy, like tearing open a bag of long-awaited crisps to find three scraps of charred potato and a pocket of stale air. You’ll feel robbed, not just in the sense of time and financial investment, but because (I’m trying to avoid ruining the game here) you’ll need to accumulate a huge amount of cash to achieve a ‘good’ ending that will have you playing the lute until your fingers bleed. This involves a fair amount of that classic Lionhead game staple: tedious micromanagement. If you thought skimming a town map with a magnifying glass in search of deprecated property would be fun, you are sadly mistaken. I don’t know why they insist on doing this. It’s like Black and White‘s villager babysitting all over again. As you complete quests and slay monsters you’ll earn Guild Seals, which are spent in the new ‘Road to Rule’. Road to Rule is an incredibly convoluted way to complete the traditional RPG goal of filling in a portion of a coloured bar and empowering your character. It’s a location on another dimension plane, filled with a series of chests you unlock by cashing in your Guild Seals. When all is said and done, it doesn’t achieve anything that the traditional ‘level up’ screen does. In fact, I quite like watching the numerical stats rise ever higher in an arbitrary sense of progression. That sense is absent from Fable III: in addition, you don’t unlock new skills like power attacks or the ability to target an enemy’s genitals with your rifle as you progress. These things may seem trivial, but they matter. Especially the genital targeting.

Like the Road to Rule, even the humble pause menu has been changed for change’s sake. In Fable III, pausing teleports you to the Sanctuary (as you are consistently reminded) where John Cleese goads you into spending real Earth pounds on trinkets in the shop. The Sanctuary serves as a hub for selecting weapons, clothing and starting a game with friends. As with the Road to Rule, I found myself asking: was there really something so terribly broken with navigating a menu that demanded running around a virtual home to correct it?

Every action you take in Fable III is a short pause away. Forget “for every action, a consequence”; think “for every action, a loading screen”. Whether travelling to the Sanctuary or Road to Rule, shaking someone’s hand or taking up a job, it is a disjointed game. Interacting with the citizens of Albion, mere dull diversions before, have descended into farce. They are incredibly languid: walk up to the person of your choice, press a button, fade to black, press and hold another button, wait around fifteen seconds, fade to black, press a button, fade to black, find another person. Worse than a chore, it’s as if Lionhead have gone out of their way to actively discourage you from forming relationships.

This discouragement extends to the co-operative, online play. It’s less painful than Fable II‘s attempt at Xbox Live integration (so is a vasectomy without anaesthetic) but yet falls far short of what it could be. Join another player’s game and your actions in their world are even more inconsequential than your own. There are no co-operative quests to share with a friend, no increase in difficulty to compensate for the extra muscle on your side. You can marry your friend, but why would you bother? It just feels so insubstantial that I doubt players will spend much time in co-op except from swapping and comparing weapons. Although it’s a more refined game, it’s also more prescriptive. What you gain in slick world maps (that don’t actually bear any resemblance to reality) and quest lists, you lose in freedom to explore the world at your leisure. Unfortunately, it’s just as glitchy and buggy as the previous Fable games. Even the end credits stutter and gasp for breath as they jerk across your screen. It is plagued with random, inexplicable slowdown: not in the frame dropping sense, it’s more like everyone is temporarily underwater while the game figures out what it was meant to be doing without soiling itself. I was terrified to take part in the chicken racing side quest after the game crashed twice as soon as said chickens left the starting gate. It’s all the more surprising that this is allegedly the patched version, eight months after the game was first released, yet riddled with bothersome minutiae that serve to frustrate and deter would-be adventurers. Surely the fact that the first Fable game took four years to make was a sign that yes, people would wait for the finished product?

Fable III is technically better than its predecessors, but it gets there by selling its soul. It’s fun, funny and expansive, yet lacking the spark that made the other games so enjoyable. It’s telling that Fable III‘s box doesn’t hint at the good-evil duality so heavily emphasised in the previous titles, because it’s largely fallen by the wayside in favour of some gimmicky mechanics that miss more often than they hit. The best bits of the game- hunting gnomes, combat, playing with your dog- come directly from Fable II, while the new additions to the formula are either frustrating or forgettable.

Let’s be honest: this is a game for gamers, not your mum. While I’m all for inclusiveness and broadening the appeal of games to a wider audience, I don’t want to play a dumbed down action game that is unsatisfying for the core Fable audience and doesn’t go far enough to entice newcomers, either. When attempting to be Jack of all Blades, you find out what you will become- a master of none.