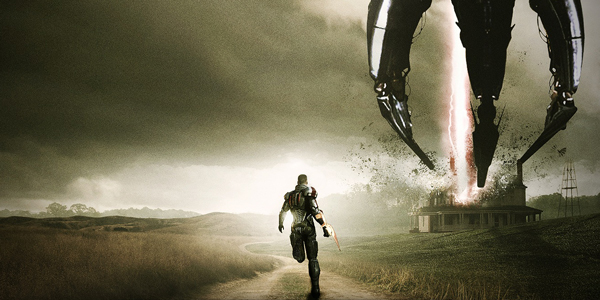 As I fled the Reaper invasion of Earth, I found a boy hiding from the slaughter. I told him to come with me, but he said I couldn’t save him. Later, I watched him die as his escape transport burst into flames, while I evacuated Earth and swore to avenge him.

His death haunts Shepard’s nightmares. His death haunts me. Could I have saved him if I’d said something different? Who knows. What matters is that I felt I could have. This is the evolution of the video game: not to have your head forcefully rotated towards the sights while the game makes the decisions, but to be the master of your own fate.

The central conceit is that your choices matter: not just in this game, but past decisions from the previous two as well. This is not Mass Effect 3; it is Mass Effect Part Three, where any attempt to isolate Shepard’s latest adventure from its predecessors is like trying to extract egg from a cake. There is little point in playing without having followed the story through the trilogy. It wastes no time introducing characters or concepts, nor should it: you wouldn’t complain that Return of the Jedi didn’t introduce that creepy dude in the black mask, or wonder as you read Mockingjay why everyone was so damn hungry.

It seems right to compare Mass Effect to Star Wars, for it shares an enthusiastic (if not obsessive) fan base and a rich mythology that extends beyond the games themselves. These are universes we become absorbed and invested in, both emotionally and financially, so big decisions in plot developments can be volatile. Somewhat ironically, fans of Mass Effect 3 have demanded changes to its controversial ending, while George Lucas is still changing the Star Wars canon leaving fans equally annoyed for the opposite reason.

Yet Mass Effect 3 is more than just one ending: it is a game filled with them. You gallivant across the galaxy, kicking so many asses that the surface will wear off your moon boots, uniting species against the Reapers and tying up every loose plot thread along the way. The Reapers are an ancient race of sentient machines, harvesting organic life every ten thousand year cycle like a ravenous space ouroboros. Shepard’s mission is to break the cycle by persuading every race in the galaxy to stop killing each other for a change: your legendary adventures precede you, and Shepard is Earth’s only hope of salvation. During your quest, you’re reunited with major characters from the franchise (assuming they didn’t die in the previous games, of course), and just like the rest of the series, every decision counts. If you’ve walked the path of the Paragon and shown mercy to the misguided, they may prove valuable war assets. If you’ve gone Renegade and shot before asking questions, the dead can’t help you, but the morally unscrupulous might. It’s a neat twist on the moral dichotomy that typifies the modern RPG: Mass Effect will still ask if you want to ‘save the baby’ or ‘eat the baby’, but at least it acknowledges the baby’s nutritional value.

Whether you’re munching on an infant snack or returning it to its parents, the circumstances are pretty dire. Most of Earth is blown up before the game has even told you its name; you’re fighting for the right to bury the dead and clean up the ashes more than anything else. It’s an even darker and more melancholy story than its prequels, evoking real sadness. Shepard knows they can’t save everyone, even their close friends. What differentiates Mass Effect from other games is that they’re your friends, too. You’ve got drunk and danced at the Citadel. You’ve loved, laughed and shared memories. You’ve invested time and effort getting to know these aliens. Shepard’s losses become the player’s. This is a series about ethics and relationships as much as killing aliens, with a well-balanced interplay between the two that will satisfy action game fans and role playing enthusiasts alike.

As a result of the impending fate of the galaxy, the game’s flow shares the sense of urgency that separated Mass Effect 2‘s emphasis on action from the more plodding ‘space cop’ investigations of the first game. The Reapers cannot be reasoned or bargained with, and they absolutely will not stop until you are digested. Truthfully, it’s not as big a difference as you think: the real change is that you’ll enjoy the combat much more the original game’s disjointed stickiness, making it more memorable. Even more refined than Mass Effect 2, if still short of the triumph that is Gears of War 3, gunfights are intense and ferocious. I made the mistake of playing as a Soldier rather than an Adept or Engineer, which limited my strategies, but you can command your teammates as ably as yourself. You can now use Kinect to direct your allies, but if you think I wanted to spend thirty hours shouting “Garrus, overload!”, you are mistaken. The addition of an ‘Omniblade’ for vicious melee attacks is a little ‘Diet Gears‘ but biotic powers and combat drones allow for a more varied experience.

It’s testament to how much the combat has improved that BioWare have added a multiplayer ‘Galaxy at War’ mode that isn’t absolutely awful. Surprisingly, it’s really good fun: playing in a team of up to five, you’ll face waves of different enemies that demand a balanced team and cohesive tactics. I’m a bigger fan of co-operative than competitive multiplayer- partly because I’m secretly crap at games- and this is among the best of them, even if it lacks the variety to ensure people will still play it in six months. The negative counterargument is that your multiplayer experience is funnelled back into the main game, affecting your ending. At least, that’s what you think, except it doesn’t really make a difference. Yes, we have to talk about the ending now. In my Mass Effect 2 review, I talked about the sense of empowerment it gave- “you are the story, not merely a passive observer of it”. Mass Effect 3 continues this empowerment, tailoring its every nuance to your previous decisions and experiences. There is satisfying resolution and heartache as your personalised butterfly effect manifests… right until the last ten minutes of the game, which are crammed full of so many non-decisions and non-sequiturs that you will feel disoriented and disillusioned.

Even when you are allowed to choose a conclusion, it matters as much as the colour of shirt you chose to wear this morning. It is undoubtedly a powerful ending, but it is not a satisfying one. Make our decisions matter. Make our sacrifices meaningful. Let our allies fight by our sides. We don’t have to survive, but we need to have tried our best. Whether or not players deserve something better than this is beyond the scope of a review– I can only talk about what I have experienced, after all- but the damage has been already done. Like Shepard, BioWare has to live with the decisions it has made. The man behind the curtain is revealed to be unaffected by our actions, and it’s the most unwelcome of revelations.

The worst part is that Mass Effect 3 is agonisingly close to being the best video game I’ve ever played. It is so outstanding that it is difficult to come to terms with: a game that momentarily breaks the shackles of the medium before being ultimately ensnared by them, a game that deserves to be played by an audience beyond adrenaline junkies and science fiction fanatics. It’s the fact that the preceding thirty hours are so great that makes the final ten minutes so bad. It’s hard to be too disappointed by a game with a bad ending after ten hours, but it’s hard not to be disappointed after one hundred hours across three games. It feels like a sneaky punch to the testicles (or pudenda, I guess) that shocks at first, before retreating to a numbing sadness that will take days to subside.

Great myths are built on more than endings: they are the product of time and investment. Mass Effect 3 doesn’t tarnish the trilogy, but it leaves a bitter aftertaste. Perhaps an analogous myth is that of Icarus: a reminder of how hyperbole and emotion can influence our expectations, elevating them beyond what can realistically be achieved. Icarus ultimately plummets to his death, unable to escape either Crete or physical reality, but what a glorious flight it must have been.

If you liked this review, you’ll love our discussion on game endings and alternative Mass Effect 3 Ending: Split Ends.