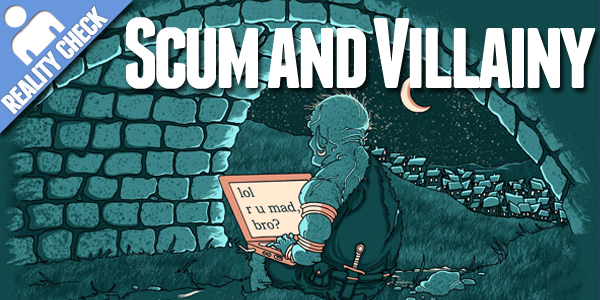 After I wrote A Wretched Hive a fortnight ago, another gaming community ‘challenger’ appeared. This time, an ignoramus named Aris Bakhtanians hurled sexist abuse during a Street Fighter x Tekken tournament, leading to victim Miranda Pakozdi’s withdrawal from said tournament. Yet, what worried me more was a subsequent article by Keza MacDonald in The Guardian titled “Are Gamers Really Sexist?”

Before I get into this, let me be clear that this is not a character assassination. I think Keza does a great job at IGN and it’s becoming the kind of website I would actually visit, something I wouldn’t have said a few years ago. Yet it’s tremendously damaging when a well-respected journalist, and a female one at that, whitewashes over what is both an obvious and serious problem within the gaming community.

MacDonald’s article is a defence of the gaming community as one that is not endemically sexist, racist or homophobic: her argument is that yes, these elements exist, but the morons are in the minority. Unfortunately her argument is supported by anecdotes, not evidence: “[the Pakodzi incident] paints a picture of the gaming community that I don’t want to believe in, and that goes against the vast majority of my experiences. This is not what we’re like.”

The problem is that “we” in the preceding quote means “my friends and I”. By relying on personal experience, one’s sample is inherently selective and can’t be representative of the community as a whole. It is biased; it clouds our judgment. I imagine Keza’s gamer friends are similar to mine: same sense of humour, probably left-leaning, many university-educated and reasonable adults. Are all gamers like that? Of course not. Even games journalists aren’t all like that (sarcastic hyperlink deliberately withheld). The point I’m ineloquently making is that I don’t play multiplayer games with sexists and homophobes, because I wouldn’t be friends with those people in real life. I have made the choice of who I interact with: this says nothing about whether other, less pleasant types of gamer exist, or how prevalent they are in the wider community.

What happens when we have no choice over the interaction? To get out of the anecdotal frame of mind, I researched various gaming websites. I started with IGN: I am aware Keza MacDonald is not responsible for the content of the entire IGN network, but it’s the most visited gaming site and seemed a fitting place to start: On the front page of IGN.com, there’s a link to the ‘Top 99 Women of 2012’. This isn’t terrible in itself, but when we click the link to ‘IGN Stars’ (renamed from ‘IGN Babes’) we see the following: This site is quite clearly aimed at male gamers, and I submit that it’s also sexist. The women in the image carousel are just like new video games, on display to be objectified and lusted after. These are not in-depth interviews with actresses and models. This doesn’t directly involve gamers themselves (I didn’t venture into the articles and their comments), so let’s look at Gamespot’s interview with Robyn Théberge from Bioware on Mass Effect 3: Notice the comments by ‘properbo_’ and ‘Icaroz89’ are positively rated, not negatively as you would expect if these were the opinions of a vocal minority. It’s worth taking a look at the other comments on the video, too, especially the one from the person who has met Robyn Théberge and can personally vouch for the quality of her butt. By claiming that sexism is not really a part of gaming culture, it diminishes and dismisses the issue, which is precisely what MacDonald says we should not be doing. We are on the same team here: neither of us wants the community to be like this, but saying “We are not like that” is counterproductive and could even be considered insulting to the victims of such abuse. Even a cursory glance at the evidence suggests that many gamers are like that.

As I said in A Wretched Hive, if people can’t play nice then we should take away their toys. If they harass people through voice chat, ban them from chatting. If they send abusive messages, remove their right to send those messages. I still don’t really care if they’re banned from playing online- I wouldn’t shed a tear for these fools- but my position has mellowed a little after many pub conversations with friends.

The really interesting question is this: why are sexism, homophobia and racism so prevalent among gamers? I think it’s because gaming has a higher proportion of white males: simple as that. Speaking as a white, heterosexual male, it’s impossible for me to truly understand what it’s like to be gay or a woman; but I do try, and that understanding leads to positive outcomes like not using “rape” as a verb or “gay” as a derogatory adjective. This understanding is the product of education, which is obviously aided by interacting with others.

Gaming is the perfect way to reduce these attitudes! If the gaming community was more representative of women and minorities, I absolutely believe attitudes would change for the better. It’s not exclusively a gaming problem: it reflects wider societal issues like the continued pervasiveness of ‘lad culture‘ and insultingly stupid justifications of homophobic prejudice.

We can’t change the world overnight, and it would be foolish to think so. Yet we can change the world incrementally, one small slice at a time. What better place to start than gaming? Perhaps the reason I am so offended and outraged by people like Aris Bakhtanians is because gaming has been my refuge from bullying and isolation: I love playing games, but they are historically the domain of people too feeble for sports and too intelligent for casual arson or vandalism. Gaming was there when real life friends were not: online friends were more pleasant and available, unconsciously screened and selected for common interests. To find out that this community has a larger, darker side, and that you were just floating along on the tip of an iceberg, is worrying and frightening.

Regardless of what the reality of the gaming community is, I want to make it a better place. MacDonald is right when she says “It’s important that we make our voices heard”, but the way to do that is not by brushing the issue under the carpet. It’s not just a few giggling idiots in the corner. The only way to tackle this wretched hive of scum and villainy is by acknowledging it exists, then doing something about it.

If you want to do something about it too, drop me an email. Or, just send me an abusive tweet: the choice is yours. But I do believe we have a choice. Let’s change the world.