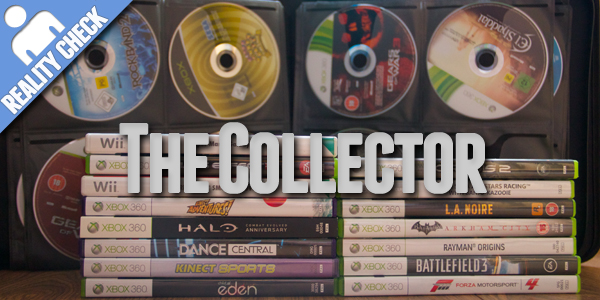 Used games: they’re great because they’re cheap. They’re bad because they’re killing the industry. They are awesome, deplorable, good and evil. Used games are certainly something, but we’re not sure what that something is yet. They are definitely tangible objects, but beyond that commentators and pundits have reached an impasse. My question is: why on Earth would anyone want to sell their games?

Since Christmas 1992, when I started with four games including my personal favourite, my game collection has inexorably built up. I have at least four hundred now. That’s not the biggest collection in the world, but it’s probably enough. As Trent Reznor said about being a collector, “things… they tend to accumulate.” One minute you’re deciding on the one game you can have for Christmas, the next you’re bidding stupid amounts of money on eBay for a copy of Burning Rangers and picking up Jedi Knight at a car boot sale.

I’ve only ever traded two games: I swapped Colin McRae Rally 3 for Colin McRae Rally 04, and I got rid of Blinx: The Time Sweeper because it was absolute crap. There are still plenty of clunkers in my collection, but most of them have sentimental value attached. To me, that sentiment is worth more than the financial incentive for trading them.

I don’t collect for the sake of hoarding. I don’t care much about the condition of the games, because their cellophane seals were made to be broken; I’m a collector of experiences, not plastics. Old games are more than just code on a cartridge: they’re like old friends. Emulation isn’t enough, because it’s just not the same quality as the original console. Sound samples are lost in the action, graphics are stretched to unnatural resolutions. Most of my old games now live in my Dad’s attic, but eventually I’d like to build a little library for them. Maybe one day my children will play them and we’ll have loads of retro fun; maybe they’ll laugh at my primitive childhood entertainment and return to their holovisors. Maybe I’ll die alone, shrivelled and emaciated, in a pile of old computer games. Yet I hate the idea of losing those games, and I feel kind of sorry for people who sell their old ones. You’re not playing them right if you’re not making that kind of connection. If that sounds narrow-minded and judgemental, that’s because it is.

That intimate connection is being eroded by trends like digital downloads. Steam presents a list of the games you “own”: mere rows of text, not real things with sights, smells and textures. They become a list of boxes to tick off as you finish them, gaming chores that must eventually be ‘done’. As we move from ‘AAA’ gaming and longer titles towards episodic games and bite-sized apps, games lose some of their emotional draw. It’s tough to be immersed and engrossed in something you’re playing on the toilet (Pokémon excepted) or where you can see everything in a single sitting. As much as I enjoy modern games, I feel little desire to play them more than once, which is the opposite of how things used to be.

Pre-owned games are great. I tend to buy new games where possible, and only buy pre-owned games where there’s either a substantial price difference or the game is no longer available. I’ll deliberately go out of my way to get something like El Shaddai on the day of release. My modus operandi is to get as many people into games as possible. As long as you pay for the games, I don’t care from where you purchase them.

For the collector, games are personal property to be resold as we see fit. The ‘End User Licensing Agreement’ is an unenforcable pile of legalese, only relevant because games are switching to always-on Internet services. There is a big push from publishers towards subscription based services: Rick Lane, everyone’s favourite one-time Split Screen collaborator, has written a great article for IGN which nicely summarises the issue. There are big problems with digital distribution: you can’t lend games to friends, you can never give them away or sell them, many games require an active network connection, and your continued access to them is dependent on the continued existence of the merchant. Craig told me that when he went on a trip to Scotland and was sans Internet, only one of his seven (installed) Steam games was playable offline. That’s rubbish: it’s not convenient for consumers at all, regardless of how nice central friends lists and occasional cut-price sales are. One third of UK households have broadband speeds of less than five megabit, making large downloads painful, and what about soldiers living overseas or frequent travellers? Do you want to download Mass Effect 3 with a 3G dongle?

Digital marketplaces aren’t a great place for browsing, either. I remember skiving off school to buy Panzer Dragoon Orta and picking up Metal Gear Solid 2: Substance as well, then immediately swapping MGS2 for a copy of Shenmue II I’d spotted on the shelf. Digital distribution doesn’t let you change your mind, whether it’s thirty seconds or thirty years after your purchase.

Some of us have welcomed our new online overlords. In a world without used games, publishers might well lower the price of new games, claims Kotaku’s Jason Schreier. However publishers’ aims are to maximise revenue, not to act as benevolent distributors. Call of Duty Elite and online season passes are subscription cash cows, not programmes in place for our benefit. To say that publishers will somehow lower the price of new games as a result of digital distribution is naive at best and demonstrably false at worst: it’s more expensive to store digitally purchased games on a Vita memory card than to buy the physical cartridges.

For me, games fit into the same category as books: I like the physicality of the product, the material history that builds through interaction as well as the mental engagement. Manuals with passwords scribbled in them, blowing into the cartridges, dog-eared boxes from well-loved games and books, my rain-soaked copy of The Stand. There’s nothing technically different or wrong with e-books and digitally downloaded games; I just like owning physical copies that take up space on my shelves. Conversely I now buy most of my music digitally, because it’s a different kind of experience. CDs get ripped once and then disappear into a cupboard somewhere: there is no emotional connection with the physical media.

If the new Xbox and Playstation don’t support both optical media and pre-owned games, then count me out. I’m just not interested. There is no factually supported argument here, no further reading subtly embedded in hyperlinks. I like games in boxes and the memories they evoke, and I want to keep adding to the collection.