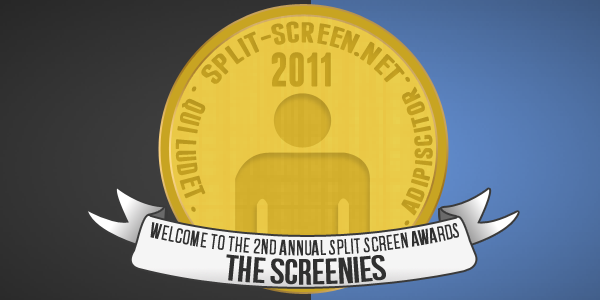 The world’s most esteemed awards return!

It’s that time of the year when we look back at the five games we played over the course of the year and give them categorical awards: it’s the Screenies 2011! We play just enough games every year to make some very subjective decisions. Here they are. Although I have a reputation as an Apple fanboy, there’s nothing wrong with being passionate about the things you love. Technology reviews are anaemic because they are obsessed with ‘balance’ and obligatory paragraphs of niggles to be swiftly cast aside when it’s time to put a big number at the end of the review.

The iPad is not perfect, and to point this out is an insult to your intelligence. It has become my day-to-day computer: I use it for reading (Reeder and Instapaper are a killer combination), web browsing, email and writing. It’s perfect for my needs. In fact, I think that it is perfect for most people’s needs: your Granny doesn’t need to use Avid Media Composer to string together a home movie and your Dad still won’t understand Facebook with a Quad-Core Intel i5.

Perhaps the most surprising thing about the iPad is the lack of a decent alternative: with a lousy OS that’s always going to be better in six months (promise) and terrible third party apps, the only thing ‘open’ about Android tablets are the wounds caused by your self-flagellation. Do yourself a favour and buy a good camera. Life is too short to capture its moments using inferior electronics. Some of my favourite pictures are on my Flickr. “A guaranteed blast of sunshine”.

I’ve spent less and less time with handheld games over the years, and this one has been no exception: I tend to prefer reading a good old-fashioned paperback when I travel, although my iPad is increasingly filling that role for saved web articles. I only really played two portable games this year, so that narrowed the field, but luckily they’re really good ones.

We still love Tiny Wings: although it has the simplest controls of any game on our list, it’s also among the most compelling. Spontaneously generated levels force players to master the basics, while your high scores trickle tantalisingly higher with each upgraded nest, all the while listening to that lovely music and enjoying the hand-drawn art. This is the only mobile game you need. I used to like Zoo Keeper until my girlfriend surpassed every single high score on both my iPad and iPhone. She even reached the ending: I didn’t even know the ending existed when I wrote my review. So now seems a good time to announce that as of today, I have retired and she’ll be taking over my writing duties in 2012.

Actually, it’s not very simple at all. “Wince and laugh as Joe crushes his testes on the side of a fish tank”.

Thanks a lot, Joe Danger. I was just about to award Bastion our Indie Game of the Year award when you rolled into town in the second week of December, giving me an extra thousand words to write when I should be stuffing my face with turkey and getting drunk.

Only joking, Joe. You’re lovely. You’re just the game we were looking for in a deluge of brown shooter sequels: funny, easy to pick up and compelling. We’ll be hunting Pro Medals and one-upping our friends’ scores long into 2012. “An articulate and poignant work of fiction”.

Bastion was the summer indie blockbuster that came out of nowhere: not just a captivating story masterfully told, but also a fun and fluid action game that’s a pleasure to come back to. The real star of the show was the clever narrator, who added emotional depth to the story and gave it a real human quality.

We can’t wait to see what Supergiant will come up with next. “No game this year- perhaps no game ever made- has this much scope, depth or romantic adventure”.

After last year’s scandal at the Screenies, when I decided Mass Effect 2 was a better game than Bayonetta in a moment of madness, let me assure you that Skyrim is definitely the best game (we’ve played) of the year.

It’s also the only game we’ve played, more or less, since it was released in November. It’s a world of unparalleled scale and attention to detail: where you are free to explore, hunt dragons and pick flowers like never before. It’s essentially Oblivion in a very shiny dragon-shaped helmet, but that is no bad thing. Yes, it has a few bugs here and there- but so does every alpine paradise. Congratulations to Skyrim, our Game of the Year 2011!

Read our Skyrim review here and find out why it’s our Game of the Year. “A spectacular odyssey that wouldn’t really work in another medium”.

It wouldn’t be the Screenies without an esoteric Japanese game-making our list. Child of Eden is a downright beautiful game, showing that games can go where films fear to tread. Are games art? Do you care when they’re this good? If Skyrim is the one game you should play this year, Child of Eden should definitely be the second.

How wrong could we possibly get it? Let us know in the comments!

Thanks to Craig for the fantastic award images in this piece.