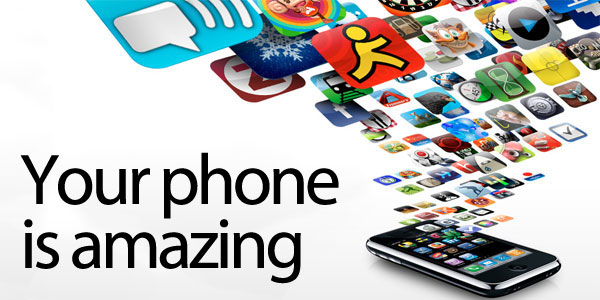 Your Phone is Amazing Five less reasons to use a laptop

If you’re the lucky owner of a new smartphone- whether it’s an iPhone, Android, Windows Phone or even a Blackberry (shudder)- it’s a device with enormous potential. These are no longer mere phones: they are real computers, and just like computers we can augment their innate functionality with new applications- or ‘apps’ for those who hate polysyllabic words. Some of these apps might have sketchy uses, but think of it as the digital equivalent of a Swiss Army Knife: you don’t really need a toothpick, diminutive saw or a pair of scissors that will barely cut through air, but it’s still really cool that the features exist.

You can turn your phone into an overpriced protractor, calculator or compass if you want but there are some features that are so incredible, you’ll glance over at your rusting Nokia 3210 and watch a single tear of solder run down its screen. Here are five great ways to turn your smartphone into a multimedia powerhouse.

The only way I can stay motivated at the gym is by keeping track of my performance. It’s fine to slow down during the run if you’ve already reached your target, but to reduce your speed is to admit failure. Equally, sometimes you forget what weight you’ve been lifting and how many reps you normally do. This is where iFitness1 comes in: you can create a custom workout and input your times and weights, or use one of the many built-in routines. Graphs log your performance and tutorial videos make it easy to learn the correct way to lift without wrecking yourself. The massive selection of exercises and stretches on offer will at least give the illusion that you’re becoming more healthy.

Runkeeper Pro is a simple idea, flawlessly executed. Use your phone’s GPS to log your run and compare your best times when you attempt the same route again. It’ll measure speed and give auditory cues as you reach your goal. When you’re recovering, upload your information to runkeeper.com and compare times with your friends. Even better, the app was free until the end of January but now it will be free permanently, so there’s no excuse.

If you’re merely looking to reach maximum strength in the shortest period of time, 100 Pushups is the way to go. It’s ugly but functional and although it doesn’t achieve anything beyond a spreadsheet and your imagination, it’s a great motivational tool that will have you flexing your muscles and throwing cars around like beachballs in no time. It’s no surprise that the iPhone happens to be the best iPod ever made: a joy to navigate and build playlists on the go, fantastic user interface and a great battery life. However, the iPod functionality is a mere overture to the music on offer. You can use the iTunes Store (or on Android, Amazon MP3) to download new music to your phone over a 3G connection, get new podcasts, preview before you buy or check out Ping and remember why it’s absolute rubbish.

Popular social networking site Last.fm works as well on your phone as on the computer, which is to say it’s only useful for listening to individual tracks. If you’ve got a Spotify premium account you can access all of your music here: if you buy a lot of music, it will save you a lot of money and I think it’s a better music discovery tool than Last.fm.

Then again, why not save all your money and listen to the radio instead? TuneIn Radio includes national, local and Internet stations which can be paused for up to half an hour if you need to converse with a human. Save your favourite stations for quick access while keeping a careful eye on the rapidly dwindling battery. It wouldn’t be a Split Screen article without me hawking games, but I’ll keep it brief. I’m sure many readers will have heard of the insanely popular Angry Birds and Doodle Jump, which have turned the world’s bathroom visits into thrilling adventures. There are loads of great titles for as little as 59p- Canabalt is a dystopian indie platform game with a pulse-pounding soundtrack and addictive properties that border on illegal, while Infinity Blade puts Xbox games to shame with its incredible presentation.

As well as original touch-screen games you can find ports of DS and PSP games like GTA: Chinatown Wars, Phoenix Wright: Ace Attorney and Final Fantasy for a fraction of the price. It won’t be long until mobile phones become the main place for gaming on the go (if they aren’t already) and with the quality and range of content on offer, it’s not difficult to see why. Listing your favourite productivity apps on the Internet is a recipe for disaster: everyone has their own preferred methods, each more convoluted and nerdy than the last, and apparently the merits of each must be argued exhaustively.

So let’s not do that and be purely subjective instead: I’ve been using Todo for a long time now and enjoy its simplicity and robustness. It’s great for shopping lists and synchronises with your computer over wi-fi effortlessly. However, I also love EpicWin, which turns your life into a role-playing game where doing the dishes gives experience and taking the bin out earns you loot. It’s pointless, but surprisingly motivating.

Anyone who’s spoken to me about online storage- and that’s a worryingly large number of people- will know I’m a big fan of Dropbox. The phone app is a neat extension of the website and is the perfect place for your flight booking reference PDFs. What makes it really excellent is the integration with Goodreader, an advanced document reader that incorporates emailing and annotation, and Elements, an elegant plain text editor.

Any article you’ve read on this site will have been outlined in Elements (in fact, my Assassin’s Creed review was written entirely on my phone) before applying the finishing touches on my computer. As all of your documents are saved into Dropbox, they’re on your computer as soon as you turn it on. It’s a writer’s best friend. Shame the icon on your home screen is so repulsive. Retail is dying, and RedLaser isn’t so much a nail in the coffin as a semi-automatic nailgun emptied into the corpse. Using your phone’s camera you can scan any barcode and it will automatically search for the best price. Of course, it’s considered extremely rude to use this when a sales advisor has spent fifteen minutes explaining the product to you.

Amazon and eBay are among the countless shops vying for your affection: every major retailer will have something here (I can’t be bothered linking to the Tesco app) so explore your favourites. Amazon’s app is a slick search tool, basket viewer and wish list manager. In fact, it’s probably a little too easy to use judging by the state of my bank balance.

If you’re hosting a party, Mixologist provides a huge database of cocktails that serves two purposes: it helps you buy the right ingredients for your booze cupboard, and gives you daft alternative names for a vodka and lemonade that will irritate your friends. I’ve barely scratched the surface. I’m off to read a newspaper, tune my guitar and learn some chords, give a presentation using my phone to read the slides and notes, check the bus times, read some RSS feeds while I cook a newly-discovered recipe and then skim over the Pokédex. See you later.

Just kidding! I hate when people end a piece of writing like that. You hold in your hands an object that would be sorcery to someone from thirty years ago. If you travelled back in time to 1900 with an iPhone, a laptop and a multipack of Twixes, people would die losing control of their bowels as their eyes erupted from their sockets in excitement. It’s easy to be complacent with such incredible technology at our fingertips on a daily basis. Your phone is a powerful instrument. Don’t make it a blunt one.

1 I tried to find iFitness in the App Store, but it’s been removed for some unknown reason. I’ll update this article when I have a link.