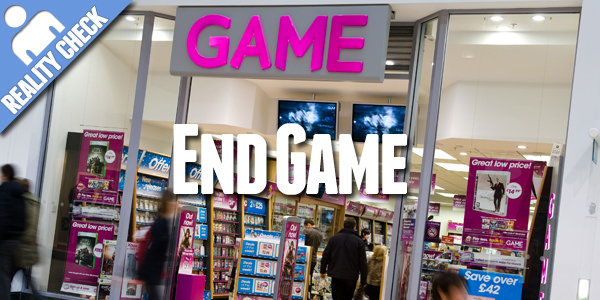 Game over for Game?

What’s harder: writing about the imminent demise of Game, or coming up with a title that isn’t “Game Over”? I feel like I should save that one for the day when I finally wear my left thumb down to a stump and start a new blog about reading.

Game will not stock Mass Effect 3 due to supply issues, or any EA games for the foreseeable future. This will result in an estimated £2.5 million loss in profit. In a month when questions have been raised over Game’s inability to continue as a business, the attitude of most gamers has been one of ambivalence or schadenfreude.

Most gamers I know rarely set foot in Game. They would rather buy their games online, or even at a supermarket, which both offer cheaper prices. Game haven’t been competitive on price for a long time: I paid £43 for Skyrim on launch day, which was 15% more than the cheapest deal at Sainsburys. I’ve pre-ordered Mass Effect 3 at ASDA. Not only are Game’s new prices more expensive, but their older games aren’t much better: you’ll never get Child of Eden for a fiver, pre-owned or not.

Price should not be the sole determinant when choosing where to shop. I bought my camera from Jessops rather than Amazon because I wanted to try it before I bought it, and I wanted somewhere to take it if I had a problem. As I wrote in Requiem for Retail last year, there’s still a place for specialist retail. However, there’s also little space for generic retail.

Game are ‘specialist’ in name only: their staff are rarely knowledgeable, and if you disagree you haven’t met the chap in the Oxford branch who thinks the PSVita plays Android apps. I worked in retail before my current job: it’s not a fun job, and I sympathise with people who do it, but at least I knew what I was talking about! It’s a failure of management, not the people on the shop floor serving customers: a lack of staff training, a failure to respond and develop in a retail environment that is increasingly hostile, an insistence on staff taking ‘pre-orders’ for games that will never go out of stock.

Of course, digital distribution has also had an impact as Steam, PSN and XBLA provide viable alternatives to brick and mortar stores. PC gaming has transitioned smoothly to digital distribution: will consoles survive? Without the flexibility of multiple online stores, Humble Bundles and the like, I wonder if the Xbox Marketplace and Playstation Store might change from slick  shops to crowded market bazaars like the iOS App Store. Epic games require epic budgets, and without the accessibility of the retail sector few developers will be able to make a game with the scale of Skyrim or Mass Effect.

Gamers- the kind reading this- don’t shop in Game. It sounds like a damning statement, but it’s less significant than you think. Gaming enthusiasts know what they want: my brother’s birthday is coming up this month and I won’t need to browse or seek advice to choose a game for his present. Robert Purchese at Eurogamer points out that Game brings exposure to gaming. Gamers don’t shop in Game, but Joe Bloggs browses there. I know what I want; Joe doesn’t.

If Game close down, where’s Joe going to buy his games? He might try the supermarket, but they’ll only stock the top twenty games. He might look on Amazon, but that’s no place for browsing. The money he might have spent on a whim in Game won’t be spent on another game: maybe Joe will buy a couple of DVDs instead, maybe his money will be whittled away on coffee and pastries like mine.

The death of Game doesn’t mean the end of gaming, but it might well stifle innovation. Games like Bayonetta, Vanquish, Dark Souls and El Shaddai can benefit from browsing Joes picking them up on a whim, where they gain extra exposure that the Mass Effects and Halos of this world don’t need. They need marketing campaigns to gain big exposure; massive shop window displays proclaiming the latest releases. Joe needs to make a conscious connection between an advertisement and the product on shelves, because he won’t go to Amazon to actively seek it out. The death of HMV doesn’t affect pop music sales, but it might affect more niche genres like classical and jazz. Dan Brown won’t shed any tears if Waterstones go out of business, but fans of graphic novels might. There’s still a case for browsing and exploring to make informed decisions on a purchase: shopping isn’t always about buying what you want. Sometimes, it’s about trying something new as well.

I’m not saying we should all immediately go to Game and spend all our money there. This is a company with a lot of sins to atone for: it charges less on its website than in-store; their reliance on pre-owned games rips off both the customers who trade games in and the publishers who sell them. Yet I do feel a certain affection for the place: whether it’s as a place for men to stave off boredom while their partner browses somewhere else, or where you can find an unloved Rock Band keyboard and give it a new home. I remember the excitement of new games, but also browsing at all of the possibilities on offer. A world without those possibilities would be a sad place indeed.