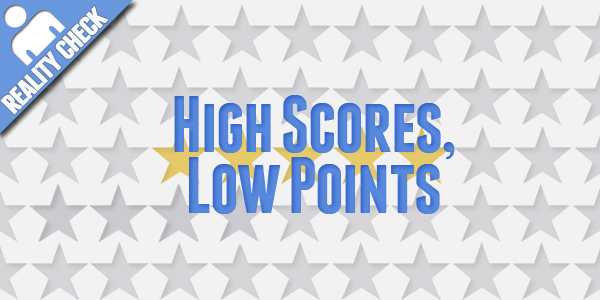 It’s 9.20pm on a Saturday night, and I have writer’s block. I am blinded by an off-white abyss; my perfunctory bullet points provide an meagre base from which to construct a column. Well, that’s pretty much all I’ve got. See you next week.

It’s much easier to destroy than to create, to deride instead of improve. People often confuse ‘criticism’ with negativity, but it’s not about that at all. Writing critically is about striking a balance between positive and negative: not necessarily objectively, but you probably shouldn’t review a game if it murdered your parents. A little scepticism is healthy for the mind, but cynicism can be toxic in large doses.

Lately, I feel many writers- myself included- have struggled to maintain this balance. The Sixth Axis came up with a games journalism headline generator, which sounds like a good joke at first. It’s a dig at the churnalism I’ve criticised in the past. Yet when you look at the news posted on The Sixth Axis, the situation is even worse than the pot calling the kettle black: the pot is pointing at the kettle and shouting “you’re filthy!”, while refusing to wash itself. People in glass houses shouldn’t tell jokes.

Press news journalism involves reporting and investigation (unless you write for the Daily Mail, when it’s mostly creative writing). Games news journalism involves reading things other people have written and rewriting them. Games journalists have a different term for investigative reporting: these pieces are called “features” and are interesting things people like myself actually want to read. The best games publications like Edge, Eurogamer, Kill Screen (and the chrysalid Polygon), plus blogs like Nightmare Mode, have a decent mixture of ‘news’ and original features. Many do not.

Recently, I’ve started using a brilliant iPad cookery app called Basil. Creator Kyle Baxter explains he couldn’t find a suitable app to catalogue his recipes, so he made his own. What a great reason to create something! When I was sixteen, I wrote a walkthrough for Ecco the Dolphin because such a guide didn’t exist. It was scarily comprehensive and badly written, but revising it now would be like rearranging a loved one’s face to suit a fashion trend. Anyway, I digress: I assumed this walkthrough would be the only Ecco guide anyone would need, but it didn’t stop people from writing alternatives.

There’s not much worth in remapping explored oceans: there are many games of which, to paraphrase Ecco, “no songs have ever been sung”. Part of the inspiration behind Retrocity was to tell stories about obscure gamers than even gamers hadn’t heard of: after all, who wants to watch me playing all the way through Sonic the Hedgehog? After many years of extensive research, it seems the answer is “no one”.

The problem with games journalism is not just that sites are just cogs in the machine, but that I know there are many talented people with great original stories to tell. Instead of recycling news, they should be blogging experiences. They should be thinking and feeling, not stifled by self-imposed conventions like the need to upload a reworded press release to a content management system because their site ‘does news’. I’m not talking about professional sites here, although some are guilty: I’m reaching out to everyone scraping together ad revenue from yet another games website. I implore you: find a niche and start mining.

I haven’t yet touched on the other issue floating in my mind: there are definitely more aspiring games journalists than there are paid jobs. That’s a sad reality of any job market, but perhaps a drive for original pieces will get better writers the jobs they deserve and the worse writers a wake-up call that they should just move to Oxford and get a job in IT. That hasn’t happened to anyone I know, of course.

One self-imposed convention that needs excised is the review score. Reviewers agonise over the arbitrary integer they assign at the end of the review, giving it this ridiculous gravitas. Freelance writer Dan Griliopoulos asked the Internet: “What games did you give maximum marks to, and why?”. My answer is on page two. This is an interesting question in itself, but perhaps he should have asked, “Why do we care so much about scoring games”? It can’t all be about getting your site on Metacritic. It’s bad enough when people are writing boilerplate text to justify an x/10, but worse when they feel the need to pigeonhole writing into sections like ‘graphics’ and ‘gameplay’ as if technical prowess directly translates to entertainment. As someone who has just finished Battlefield 3′s dull campaign, I assure you this is not the case.

You may have noticed this already, but review scores on Split Screen are gone. They undermine the writing we work hard to produce and they just don’t make sense, given the way we approach games. We review experiences, not washing machines. I had a conversation with someone the other day who thought Bayonetta deserved an 8/10 rather than a 10/10 (they’re wrong). This is the problem with the scoring system: you start arguing about numbers, rather than discussing something that actually matters. I’ll bet that if they read my review, we’d find a lot more common ground. Scores corral games into buckets of good and bad, but they’re not even good at that. Dead Island just had a Game of the Year edition announced, which flies in the face of objective reality.

I christened this column Reality Check because it intends to cut through the hyperbole and furore surrounding gaming, coming from a different angle to a unique conclusion. This week, you could say I had a reality check myself. I realised that I was drifting towards the bad side of the balance I mentioned earlier, that the scepticism was becoming poisonous. To my mind, gaming is first and foremost about fun: while examining games critically doesn’t make them any less fun, looking at the industry with a cynical eye certainly does, at least on a personal level. So while of course Reality Check will continue, in future I’ll aim for a more positive form of iconoclasm that’s about constructing better realities rather than demolishing the existing ones. You’re going to like it.

Or as someone said to me this week, if you’re cynical, “you’re always going to be one of the cranky old men in the balcony and never one of the Muppets having all the fun on stage.”