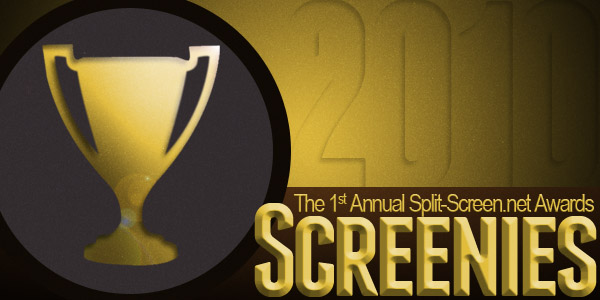 2010 was an amazing year for games: from the innovative Heavy Rain, the sublime Super Mario Galaxy 2 and the introduction of Playstation Move and Kinect, as well as the launch of the iPad. I didn’t play every game that was released this year. If someone out there would like to pay for me to attempt this in 2011, please get in touch. I’ve only chosen games that I played for a decent length of time. What I lack in writing skill and resources, I make up for in integrity! I agonised over my choice for this. I even got an email from Craig asking if I was really sure while he was drawing up the artwork for this feature, since I spent the first eleven months of the year frothing over Bayonetta before Mass Effect 2 won me over just in time for Christmas. The short answer is, buy both. The long answer is that if I forced you to play one game made this year at gunpoint, that game would be Mass Effect 2.

It’s a celebration of what makes video games so unique, absorbing us into a story in a way that cinema can only dream of achieving. It’s a damn fine action game, just as fun as Gears of War or Uncharted with more depth and maturity than either. It’s bombastic and imperfect but thrilling right until the last second. It also makes you wonder how on Earth Bioware will top this, and if you spotted the pun in the previous clause then congratulations. Congratulations to Mass Effect 2, our Game of the Year for 2010! Bayonetta is the action game all other action games wish they could be. It makes Ninja Gaiden look like a cantankerous old dinosaur and shows Devil May Cry how cool cut-scenes and stylish action should be. At the heart of Bayonetta is a refined combat engine that allows even the most incompetent gamer to chain together impressive moves and enjoy themselves, while pushing hardcore gamers to their limits on higher difficulty settings.

It’s also lets you kick God into the sun and fight a giant baby’s head with dragons for arms. What more could you want? I guess I didn’t gush over Super Meat Boy quite enough when I first reviewed it as it seems some people still haven’t played it, so to make up for that: this is one of the best platform games ever made and it simply must be purchased immediately. There, that ought to be an embarrassing sentence to look back on in six months.

Super Meat Boy is hard as hell, but that’s only because your hands are weak and your mind is too feeble to comprehend it. In mastering it, you discover all the joys missing from so many games today- namely, great humour and the satisfaction of completing a meaty challenge (sorry). In a year full of great indie releases, Meat Boy still stands out as a must-buy. It wasn’t a brilliant year for games on traditional handheld consoles: most of my time was spent with iOS games like Infinity Blade and Trainyard. Luckily you only need one game when it’s as engrossing as Pokémon.

Heartgold takes the one of the best Game Boy games ever, adds some modern spit and polish while retaining everything good about the series and sidestepping most of the bad. This is the definitive version of a true classic, with hordes of Pokémon to collect and the nifty Pokéwalker accessory to take up every waking moment of free time. If you’re man (or woman) enough to play a kids game, it’s brilliant and has amazing longevity.