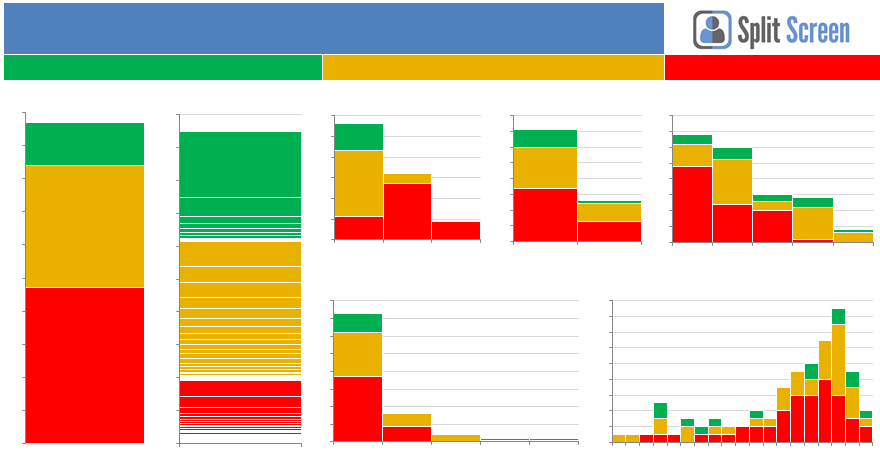 I own 97 uncompleted videogames. That’s 97 times where I’ve either failed to start, given up after starting or, shockingly, didn’t even realise I owned the damned thing. Not one of the 97 have been completed to my satisfaction.

Before I buy any new games I need to finish the old ones. But where to start?

I’ve divided up the pile of shame into three priorities:

Excited to Play, Curious to Play, Not Interested in Playing.

Then I went mad, built a spreadsheet and graphed the hell out of it because I’m on holiday and no-one told me to stop: The conclusion to this beautiful spreadsheet is the 13 games I am excited to play and will complete in 2015:

Beyond Good and Evil: Kindly gifted to me by the good Rick Lane, BG&E is one of the old guard of my pile of shame. I was put off at the time by the thoughts of playing using the keyboard. I now have a wired Xbox controller, mapping software and the hope that BG&E will be like Psychonauts in terms of colour and imagination.

Company of Heroes: The first RTS that Shawn Elliott fell in love with. He raved about it on the GFW Radio podcasts and I’ve always been curious. Hopefully it fairs better than StarCraft II did. I’ve also got a World War Two book that would sit nicely alongside this.

Fez: Colour and imagination will be a theme in my picks. I’ve played a little of Fez and dug it. I will warn you now that walkthroughs will be deployed often and early in the face of prolonged head scratching.

Gods Will Be Watching: The newest addition to the pile. The trailer struck me as having the vibe of Superbrothers Swords & Sworcery EP with more grit and narrative.

Grand Theft Auto: Chinatown Wars: The PS1 Grand Theft Auto 3 remains my favourite of the series. If I can overcome what I expect to be touchscreen controller issues and relive some of that nostalgia, even for a moment, then I’ll be happy.

Grim Fandango: Bought on eBay, installed a point-and-click mod to remove the tank controls and then… something happened. Or rather nothing happened. Something will happen soon.

Half Life: Black Mesa: On the Remastered episode of the podcast we talk about Black Mesa as being a surrogate game in place of an aged original. Let’s see if the Chinese Democracy of mods holds up.

StarCraft II: Wings of Liberty: The second of the old games on the bottom of the pile. I’ve previously dabbled with multiplayer in the same way that a chimpanzee dabbles with quantum electrodynamics. What’s changed is I am now an avid competitive StarCraft II fan to the point I recognise Korean progamers. A grasp of the unit types and general play styles will help me now. I’m looking to complete the single player campaign and take on the multiplayer once more. At £39.99 this is the biggest buyer’s remorse I’ve ever had.

Tiny & Big: Grandpas Leftovers: I suspect I’ve completed more of Tiny & Big than anything else on the list. Loved the creative freedom afforded in solving the puzzles and the soundtrack is killer.

Unreal: Gold: I’ve played a little but need to get back on the horse. Probably second on the hitlist after Tiny & Big. I’ve got the book. Now I need the momentum.

Uplink: Bought it years ago and when the mood has struck me I’ve been without a mouse. Or I only get in the mood when I know I can’t play. (Don’t tell anyone but I’m hoping this might actually teach me something about networked computers…. sshhhhhhh…)

Apart from the priority list I learned a few things.

I bought the games I’m excited to play from a variety of online and retail stores and they’re mainly PC games. This is comforting in a sense because my next big purchase/project is to build a new, sweet gaming rig. Around £60 worth of investments to realise. That previous sentence is perhaps the most project management thing I’ve ever vomited. Not wrong though.

I have no interest in playing around half of my pile of shame. Most of these came bundled along with another game I genuinely wanted to play (Humble Bundles being the biggest sinner) and the rest were free Games with Gold downloads from Xbox Live I felt obliged to download. What wasn’t free games amounts to £40 of many, little impulse buys on Steam sales and other online stores.

The curious to play games are quite curious really. They are mainly games I actively sought out but when I ask myself today what do I want to play they didn’t make the cut. Either I’ve tried them and they failed to win me over or I have moved on since then. Once I kill off The 13 Games of 2015 I’ll look to make a good dent into these curiosities.

In true project management style(y) I will report back progress monthly on how I’m breaking the backlog. In some sense this is also a list of reviews you can expect from me.

13 games over twelve months is manageable.

Project managable, that is!