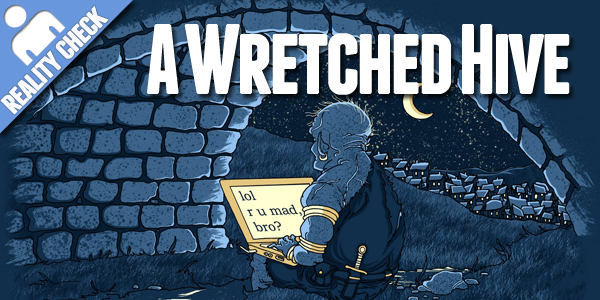 Banner image from The Art of Jeremy Owen

Last Monday morning, I left my flat to go to work. There was a man sitting in a chair by the front door, wearing only a dressing gown, having what I presume was a post-coital cigarette.

Long story short: I quit smoking four years ago. I don’t like the smell of stale smoke (even smokers don’t!). I particularly don’t like when it drifts under my draughty door frame, which had been happening for weeks. Here was the culprit! The bastard who had been offending my nostrils! I did what any British man would do in this situation: I said nothing, took my bike and left.

We gamers like to think of our hobby as an egalitarian pursuit, because anyone can be a gamer. “Jump in”. “Up to six billion players”. The name ‘Wii’ was conjured to promote inclusiveness, which is what makes the new ‘Wii U’ somewhat ironic. The rise of free to play games and inexpensive downloadable titles, whether through Steam or app stores, has made it cheaper and easier than ever to have fun.

Let’s shatter the illusion. Gaming isn’t as inclusive as you think. Just because the barriers aren’t visible does not mean they don’t exist: they are social instead of physical. Here’s a challenge for those who disagree: make yourself a fake Xbox Gamertag or PSN SEN account. Imply that you’re a homosexual, female Muslim who likes Call of Duty, but are an unskilled novice and so have a lower than average kill-to-death ratio. What kind of a welcome will you receive? I don’t even need to imagine the responses. They’re already on the bottom half of the Internet. They’re all over Twitter and Facebook, on YouTube videos and comments. They clog every forum and games website. They are the omnipresent layer of frothy scum floating on the surface of the Internet.

This week’s big scandal, for those of you who don’t circle Twitter like a vulture picking scraps to form an article every week, was when BioWare writer Jennifer Hepler was systematically bullied online- and even with phone calls to her home- because of some bullshit a troll made up. She was called “the cancer that is killing BioWare”. Even worse than the emergent campaign of targeted hatred was the nature of said hatred: she was accused of “screwing up Mass Effect by making Shepherd gay” (even though Hepler didn’t actually work on Mass Effect) and there was an implication that her ovaries denied her the right to speak about computer games authoritatively. That classic double whammy of sexism and homophobia.

Every gamer with more than one brain cell was disgusted and outraged at the whole affair. Notice that I didn’t say they were surprised, because who would be? This is the gaming community’s elephant in the room: it’s got an ejaculating penis and a swastika drawn on it. Susan Arendt of the Escapist wrote an excellent response to the harassers that I won’t quote extensively and risk taking out of context, but the take home message was this:

“You are sound and fury signifying nothing. You are intellectually bankrupt, small and boring.”

Let morons be morons. Let us ignore and ostracise them. It’s the same stance I took in No Comment regarding trolls on YouTube, but I don’t think it applies to gaming in the same way. Allow me to explain before I sound like a hypocrite and fool: I don’t think we can change YouTube. It’s a free service with an enormous audience. It is not a single community as far as I am concerned: it encapsulates all of them. I’ve watched everything from domino stacking to religious debates on YouTube. Two YouTube users can have nothing in common except watching low-bitrate videos. My response is to block the comments, which is admittedly cowardly, but if I ran the site I would eliminate comments entirely. Gaming is not like that: sure, there are sub-strata of interests, and gaming overlaps with other hobbies like animé and science-fiction, but gamers as a whole are not disparate. I was president of the Edinburgh University Computer Gaming Society (and I’ve heard all your jokes) and it was a great mix of PC and console fans, ‘hardcore’ gamers and people who just liked Wii Sports. Yet despite our different preferences, we shared a core love of gaming.

Is it good enough to say “let morons be morons”? Is it something we should have to ignore, or can we change their attitudes for the better? As someone who has been bullied and insulted online, and has bulled and insulted myself, I don’t think it is acceptable. We can’t just let morons be morons. No one pointed out to me what an idiot I was being online; I had to come to the realisation myself, but not before I’d said a lot of unpleasant things and probably upset a fair few people. That was the intention though: to intimidate and humiliate, to bring down other people because you had nothing positive to contribute. Ignoring those kind of people, like my younger self, cannot solve this problem. We should educate them. We shouldn’t be ignorant about a position that arises from ignorance.

Passivity solves nothing. It actually makes it worse, because it sends out a message that this kind of behaviour is tolerable. It’s an insult almost as gross as those directed at the victims of online abuse. I don’t know about you, but I’d love to play a game of Battlefield with complete strangers and know they would be friendly. Sadly the only online games with a great community, from my experience, were Phantasy Star Online and PGR2. It’s no coincidence that those are my two fondest online gaming memories.

Fundamentally, it’s a respect issue. It’s about acknowledging that everyone is different, and no one is right or wrong (unless you’re a Young Earth Creationist). The message we send out should be this: no one ever has the right to discriminate against someone on the grounds of racism, sexism or homophobia, and we will take away your toys if you don’t play nicely. Ban them from Xbox Live, PSN and Steam. One strength of perpetual online identities is that EA can ban assholes from games based on their conduct in forums- and why not? Who would miss them? I wouldn’t. We don’t let football hooligans back into the grounds even if they have paid for a season ticket. Your investment doesn’t give you a free pass to offend others.

Maybe I’m being cynical and things are actually changing for the better. Mass Effect 3 has a reversible cover with ‘FemShep’ on it (although perhaps FemShep should be the default cover, and perhaps we should call her ’Shepherd’ and not FemShep?). It’s interesting that Mass Effect was singled out by conservative bigots for its approach to same-sex relationships, since the Fable series has long given them equal weight. Looking wider, Xbox Live has a robust feedback and moderation system ranging from muting the morons to reporting them to Microsoft, which works up to a point but it didn’t stop me playing against a gamer named ‘Clabby Funt’ on Crysis 2 last night.

If we’re ever going to develop as a species, if we want to make gaming truly egalitarian and open to all, then we need to take a stand. We need to look that smoker in the eye and tell him to not to fill our homes with his toxicity. We need to tell him to take it somewhere else or put a stop to it. We’ll ask nicely at first and give him a chance to see the error of his ways, because that’s what civilised adults do. Then we’ll tell him to fuck right off.