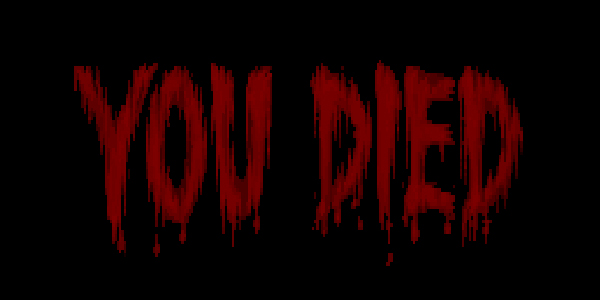 Beyond mere death in games.

People have a hard time dealing with death. We don’t just grieve over lost loved ones: we mourn complete strangers and celebrities we’ve never even met. Death is a subject that is difficult to approach, so it’s unsurprising that game developers have incorporated death in a way that is either crass, facile or both.

Games don’t really have ‘death’ in the sense of finality: it’s just one long stream of life, punctuated by save points to which we can rewind after a mistake. Narratively, the only universe that exists is the one where we played perfectly. What could be more fake, hollow and unrealistic than a perfect life? Games should be able to give us new perspectives on life, rather than conforming to ideal ones.

The concept of ‘Game Over’ has been engrained in wider collective consciousness since Bill Paxman’s immortal line in Aliens, a quip from the future about the culture of our past. In arcade games of yore, and in neo-arcade games that explicitly retain the ideas of continues and ‘credits’, death is the fail state a player strives to avoid. That creates an obvious imperative to… well, to stay alive. In arcade games like Metal Slug or Teenage Mutant Ninja Turtles, the number of coins in your pocket determines your length of life. You can keep plugging away in a war of attrition between wallet and machine until you eventually win.

The alternative is death punctuated by checkpoints, used by everything from platform games to role-playing games and first person shooters. Death sucks you down a temporal wormhole and spits you out at the last save point: the word “LOADING” appears so you know the game hasn’t crashed.

It is a jarring contrast, reminding the player that they are indeed playing a game, and few games have attempted to tackle it. The 2008 reboot of Prince of Persia, as Jerry Holkins points out, uses the character Elika to essentially automate the loading process and teleport the player to an earlier checkpoint. This doesn’t make the game any easier or harder; it reveals that the traditional ‘forced reload’ creates an illusion of difficulty through death rather than actual challenge. The brilliant Rayman Origins uses a similar technique, but it still feels like a challenging game- because it is.

While arcades declined in popularity, the scope of home games expanded and their dependency on death to create a challenge was reduced. In multiplayer games, death became a score as players killed each other trillions of times. More people have been killed in Call of Duty: Black Ops than the population of Earth. Dying is just a five second gap in which to rehydrate between firefights, a temporary punishment.

In massively multiplayer online games, this punishment is often manifested as the ‘corpse run’, forcing players to retrace their steps to collect dropped equipment. It’s an inconsequential kind of death, where enemies don’t heal and the world keeps turning, the opposite of a traditional RPG model of saving and reloading. This ‘death as a setback’ function has bled into single player games like Fable and Crackdown, where we are incapacitated for the briefest of moments. When you remove the ‘challenge’ associated with overcoming obstacles and avoiding death, it changes the pace of the game but not necessarily the tone: Bioshock’s Rapture, for example, is a violent and cruel world even with the omnipresent Vita-Chambers.

Players can also die when the game’s story demands it. This situation actually puts gaming at odds with other media: the player spends the whole game trying to not die and then dies at the end anyway. Some Call of Duty titles let you play as multiple characters across the campaign, killing some of them off for the emotional impact value. There’s nothing wrong with that per se, but it raises the question of why the narrative insisted you murder all those enemy soldiers without dying, before a nuclear warhead indiscriminately killed you and everyone else within a fifty mile radius.

There is a discrepancy that some deaths lead to failing the game, while others must simply be accepted, and that acceptance is not easy. Perhaps the real problem is the establishment of death as a failure state (or should that be Establishment?). When you survive in Modern Warfare long enough to see your character die in a cut scene, the player feels cheated. Your actions feel meaningless if they make no difference to the outcome of the plot.

When a soldier is killed and we see the aftermath from another’s perspective, it reinforces that we players are passive observers of the action and not the agents of change we want to be. Without the illusion of agency, you might as well be watching a film, and who wants to do that? It’s fine to have a character die at the end of a game, because that’s the end of their story. Part of the problem surrounding Mass Effect 3‘s ending- and let’s be clear here, it definitely has problems- was that, death or no death, it didn’t feel like your choices mattered. That’s fine if you’re a writer making a point about the nature of choice in a game, like Ken Levine with Bioshock, but it’s not so fun when your game advertises “groundbreaking interactive storytelling” on the box.

We kill and are killed in games without any sense of gravitas. The story and impetus of the game demands that our character doesn’t die. The game’s mechanics of challenge desire that we do die, so a conflict arises. One of the potential alternatives to traditional approaches to death is to give it permanence. The concept of ‘perma-death’ isn’t a new one, remaining the preserve of the hardcore: in fact, Diablo actually calls it ‘Hardcore Mode’. Steel Battalion, the mech simulator famous for having a controller that would crush coffee tables, ended a player’s game and wiped their saved data if they didn’t eject from their wrecked mech in time. This is the kind of event that would make the average player throw their controller at the television in fury, which is no mean feat if you’re playing Steel Battalion.

Although perma-death might be too punishing for most games, this doesn’t mean it can’t be self-enforced: Brendan Keogh’s ‘Towards Dawn’ is a fascinating Minecraft odyssey that shows the game in a whole new light. It fundamentally changes the nature of gaming death from a temporary setback to an abrupt stop. This creates an additional problem that, as games are generally escapist in nature, we often want to play as a superhero that laughs in the face of death and doesn’t cower from it. One of the refreshing things aboutDark Souls is that it reminds us that we are mortal, weak, and our lives are finite. In a real life battle against a dragon or an army of skeletons, we would be in somewhat of a pickle.

Far Cry 2, a game as innovative as it is maddening, has ‘buddies’ that you can befriend during the campaign. They give advice on alternate ways of completing objectives, and if you’re wounded in action they might turn up and rescue you from death. Although buddies are tough, they aren’t invincible: if they’re mortally wounded, the player can choose to put them out of their misery. These companions are worth having around, but unlike the supporting cast of Baldur’s Gate, you can’t just bribe a priest to resurrect them and cover up your tactical ineptitude. Games focus on other characters’ deaths when they’re looking down the barrel of our gun, but Far Cry 2 goes further and incriminates the player in the deaths of comrades. It’s not often that we are made to answer for our actions: generally the player is held unaccountable for a wanton spree of violence, or even rewarded for it.

One of the challenges of game death is convincingly integrating it into the story, since if you kill off your protagonist there’s no story left to tell. Developers are therefore often forced into the ‘punctuated checkpoint’ scenario. As an alternative, Shogun: Total War uses royal lines of succession, where players must ensure their daimyo has an heir lest they are killed in battle. It’s more interesting to sire a new life than to find one in a television set or mushroom: more importantly, it allows for the death of a main character while allowing for a continuation of the narrative.

It’s funny that video game developers have treated death with such triviality, when the concept of loss has already been conveyed well in chess. A skilled player can sacrifice a valuable piece like their queen to gain a tactical advantage over the other. The loss is tangible: you physically remove the piece from play. Where’s the tactical advantage in losing a unit in a strategy game, or any other game for that matter? Games rarely give players a finite number of pieces: tanks roll out of Tardis-like factories, bankrolled by limitless mineral reserves, and it’s no hassle for the armchair general to build another battalion if one is massacred. The alternative is the Frozen Synapse approach, where players receive only a few mercenaries with which to stage an attack. It’s tense and unforgiving: it can justifiably be called strategic, unlike games like Starcraft, which are often as reliant on reaction times.

Yet this idea of strategic loss doesn’t just apply to strategy games: it can also apply to titles dependent on narrative: contrast the approach of the aforementioned Far Cry 2 with Halo Reach, where you were accompanied by invincible super soldiers who could only die in cut scenes. What is the more meaningful experience? Which game are you going to remember?

The only way to ‘reclaim’ death is to imbue it with meaning. We don’t need legions of mindless troops, companions that are temporarily ‘knocked out’ and dungeons in which we know we’ll never become another decorative skeleton. We need characters worth mourning, adventures and causes worth dying for: those are experiences we can truly cherish. Games need to treat death not as a fail state or a temporary roadblock, but as genuine loss, because that’s what gives the player a reason to live.