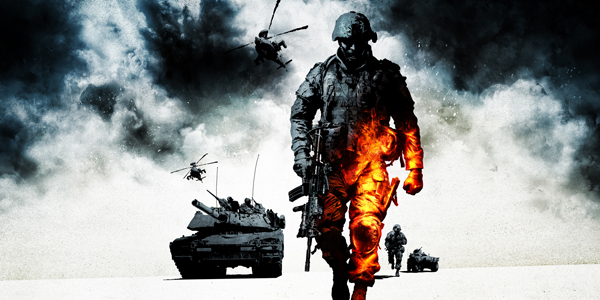 Battlefield: Bad Company 2 doesn’t feel like one game. The single player campaign and online multiplayer components, while superficially similar, don’t have a lot in common. Rather than attempt the unenviable task of reviewing both games as one, I’ve split this review into two. Is the whole worth more than the sum of its parts? Is the worthiness of one part sufficiently worthy to outweigh the unworthiness of the other worthless part?

Campaign: Death by a Thousand Bullets

If life is like a box of chocolates, then life in Bad Company is like a box of fireworks. They are great at first: you marvel at how explosive and loud they are, then you gradually become dulled and desensitised until you’re just standing out in the cold watching repetitive chemical reactions.

What would happen if the firework display lasted for eight hours? You’d end up with something like Bad Company 2: a bombastic and ostentatious game with less actual meat than a McDonalds hamburger. I’ll bet you can guess the storyline already: the Russians are up to no good. So, it falls to you, an all-American Joe with no personality and exceptional firearms skills, and your squad of gung-ho special ops soldiers to go and murder the aforementioned Russians. Your companions’ hobbies include disobeying orders and blowing things up while making sarcastic quips. You’ll travel to snowcapped mountains, jungles and the same decaying building site you previously besieged in Halo, Gears of War and Call of Duty. I know it’s easy to get excited at the prospect of playing a game in which you shoot guns and drive cars, but please do try and remain calm.

This game is so predictable, you’ll think it has formed a neural link and your dreams are manifesting as vivid combat scenarios. All of the cardinal sins of the modern first person shooter are here: invisible triggers teleport enemies into the fray when you step on them. Poor checkpoint placement forces you to replay large sections over and over again if you die (there’s no option to manually save your progress). Collectibles are hidden in random buildings and don’t encourage real exploration or attention. You gradually gain access to a huge array of ineffective guns, differing only in paint job, that you’ll neglect in favour of your superior starting weapons. It’s riddled with inconsistencies: you can survive plummeting from a falling helicopter or being shelled by mortars, yet a small trickle of water in a canal can lead to immediate death in one level. Maybe it’s actually chemical effluence masquerading as water, but it should be an environmental artist’s priority to draw attention to such hazards. Veering slightly off the level designer’s intended track leads to an often explosive demise while the game shouts at you to “RETURN TO THE BATTLEFIELD!”, in spite of the expansive surroundings.

Why bother creating such extravagant vistas if we aren’t free to explore them? Far Cry managed this in 2004, yet we’re still forced to take a guided tour through scenic Linearsville in a game that should have grander aspirations. One level in Bad Company 2 is set in a massive desert: three linear pockets of action on the periphery of a barren wilderness, which you travel between in a buggy that steers like an inflatable moon rover. You’re funnelled up a canyon into one gauntlet; later forced through a castle gate used to crush independent strategic thought in both medieval times and the modern era.

The Frostbite engine allows you to tear apart whole buildings with explosives, while cover disintegrates around you during a gunfight. For all the bombast, it’s downright boring to play. It should be exciting, but it gives the opposing forces- and their limitless supply of rockets and grenades- an unfair advantage. The only things that remain impervious to damage are your imbecilic squad-mates, idling while you inch forward into another scripted shootout. I know the name of the game is ‘Bad Company’ but I didn’t expect that to refer so literally to the team. They are no fun to be around.

During the loading sequences, the game was kind enough to inform me that they hang back “for a good reason”. This is because they can’t think for themselves and love to cower behind cover while you pick off every last foe. Sometimes the bad guys are standing right in front of your squad buddies and they still won’t do anything. It certainly brings new meaning to the term ‘special ops’. Enemies react unconvincingly to gunfire, often shrugging off a salvo and getting back up, making it hard to tell if they’re dead or just having a brief time out.

The whole campaign is dire. There is a real sloppiness to it: a exhaled sigh of “that’ll do” from a producer ticking off a list of checkboxes, rather than a game that pushes the envelope or preferably blows apart said envelope with explosives. Any fleeting enjoyment is lost in the tedium, like gunsmoke blown away in a wind that inconsistently swithers between a noisy gale and irritating draught.

Your time is worth more than this drivel has to offer.

Sniper fire ricochets off the ruined building your squad has found itself in, the crack of bullet on brick echoing through the wall. The sound is deafening, blocking out the dull thud of artillery fire and machineguns rattling in the distance. Your team-mate lets out a yelp as a sniper round shreds him; he collapses to the floor. You rush over, priming your defibrillator, and resuscitate him before scrambling back into cover to avoid the sniper still scanning the building for targets.

You are mere inches from the objective. Your squad makes a collective dash across the courtyard and crouches behind a couple of suspiciously unscathed crates, the past shelter collapsing into rubble with a tired sigh. You hear the feint “tickticktick” of the enemy flag being lowered from its pole and replaced from your own. Just as the capture is complete, a tank roars into the courtyard and sprays the flag site in machine-gun fire. Another squad-mate raises a rocket launcher and the tank erupts in a deafening fireball that blinds everyone nearby.

You succumb to a shotgun round fired by the tank’s driver, who had somehow managed to bail out in time. You’ll respawn in five seconds, ready to retake the flag if the remaining squaddies can survive long enough for you to join them, and that’s just two minutes in a game where matches last for half an hour.

It’s ironic that Bad Company 2‘s main competitor, Call of Duty, uses the suffix ‘Modern Warfare’. You spend most of your time in Call of Duty running around like an 80s action hero, hosing the levels with gunfire; there’s nothing modern about it. Bad Company 2 is more like Black Hawk Down or The Hurt Locker: solo commandos don’t stand a chance. They’ll be left cowering behind a wrecked building hiding from a tank, out of bullets, low on health, quietly sobbing and soiling themselves. Bad Company is not just team-oriented: it’s team-exclusive. Players can pair up with friends in a ‘squad’ of four or be automatically assigned to one when joining a game. You’ll score more points just from being in a squad as you secure objectives. There are four distinct roles to choose from: Medics are powerless against tanks but vital to keep casulties to a minimum, only an Engineer can repair damaged vehicles, Recon units can tag targets from a distance but are vulnerable at close range, and all three will run out of ammunition without an Assault player tossing them magazines.

It’s essential to have a balanced squad so that you can be prepared for any situation: luckily, players can swap classes on the fly by picking up the relevant ‘kit’ from a downed friend or foe, even acquiring a new gun they haven’t unlocked yet. This system requires a modicum of effort to get to grips with and unlock some decent kit. For example Medics can’t heal people until they’ve killed a few first, which seems a direct breach of the Hippocratic Oath, but that’s war for you. Although Bad Company 2 does a good job of marking objectives, friends and foes, it’s one of few games where a headset should be considered mandatory. Communication is vital: the team tactics and reconnaissance kind, not the homophobia and Linkin Park through the stereo kind, but your level of success depends on your friends.

Since human beings are (theoretically) more intelligent and unpredictable than the terrible computer opposition from the campaign, online battles are several orders of magnitude more exciting. As with most online games, expect to be killed swiftly and efficiently by more experienced players as you learn where not to stand and how not to act. The maps are diverse and sprawling, split into two game modes. In Conquest your aim is to capture all the points on a map and run down the enemy’s ticker to zero, while in Rush you’ll either attack or defend a series of M-COM stations. Rush is probably the more thrilling of the two: stations must usually be armed with C4 and then protected from a bomb disposal expert (some can be destroyed by blowing up the building they’re stationed within), leading to tense and often desperate last stands between warring factions. Emphasis is placed on vehicular combat: quad bikes, jeeps with guns, tanks and helicopters can be used to traverse the levels, all preferable to running. Even within an armoured car you’ll always feel vulnerable since you’re only one land mine away from annihilation; secondary gunners are at the mercy of the driver, which can make for a terrifying twenty seconds as an inexperienced pilot flies your chopper into the side of a hill. Despite the firepower on offer, it’s a well-balanced game and it’s difficult, though not unheard of, for one side to gain an insurmountable advantage over the other.

Everything that makes Bad Company 2 a rubbish solo game makes it, paradoxically, an excellent multiplayer one. There’s no plot, only a series of brief micro-stories that write themselves every time you play. Linearity is replaced by ever-changing, often insane scenarios that reward skill but also teamwork. The destructible terrain dynamically changes the course of battle, which is even more apparent when you start a new round and wonder from where all those intact windows came. Nowhere is safe for long.

Once you’ve sampled the online play, ‘Hardcore’ mode removes a lot of the helpful visual indication including ammo counters, maps and replaces your armour with tissue paper. This is even more thrilling and immersive; it adds an additional layer of strategy and tension. Co-operation is even more crucial since if you die, no-one is going to know about it unless they’re right next to you. To me, that’s what a good team game should be about. The sum of your squad’s actions is worth than that of a single player, but individual acts of daring and skill can still win the battle, if not the war.

It’s hard to fault Bad Company 2‘s multiplayer component. Its appeal is deep, long and broad. My only complaint is that, instead of spending development time on the abysmal campaign, they should have scrapped it and made the game online-only like its predecessor Battlefield 2, including even more maps and variation. However it’s difficult to recommend with the knowledge that Battlefield 3 will be released in a month’s time, which will cause the number of online Bad Company 2 players to drop dramatically. Still, for at least the next three weeks, this is as gritty and compelling as virtual warfare gets.