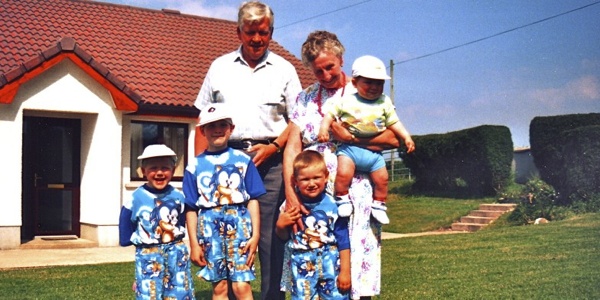 Last weekend I was at Download Festival: three days of mud and music in the English countryside. While I was really excited to see some of my favourite bands including Metallica, Megadeth and Rise Against, I was more excited to spend some quality time with my brothers.

We have always been the best of friends. It took me a long time to realise that. When I was growing up, I didn’t have many friends and lived on the opposite site of town to my schoolmates, due to a primary school decision that is too boring to elaborate upon.  I spent free time with my brothers Paul and Daniel, joined by Mark in 1993. We spent evenings, weekends and long summers together. We made ‘tents’ by attaching tea towels to kitchen chairs, played football and cycled in the back garden until the grass was churned into mud, adventured beyond the garden hedge and into the dark territory of neighbours’ property. The Wicked Witch threatened to burst our football if it came over her fence again, but she was no match for me scrambling over that fence and back before her dog started barking.

My fondest memories of summer were at a caravan site in Millisle, which will make anyone from Northern Ireland laugh. It was a coastal site and we were right by the sea: we would leave in the morning and build sandcastles until the tide threatened to sweep them away, coming in for dinner with our necks burned raw from the sun- except for Daniel. Somehow he always tanned and was spared the sticky agony of a hot summer evening with only a bottle of after sun for comfort.

We found a small rocky outcrop near the beach. We called it ‘The Island’. It became our little fortress for skimming stones and defending from other groups of children. At low tide, we’d explore the rock pools and newly revealed beaches. One time, Paul and I went much further than our parents would have allowed. The rocks stretched out infinitely in those days, and I just climbed and climbed, leaving my younger brother in my wake. He’d jump over gaps that I just walked over. We surveyed uncharted, unknowable worlds.

The tide started to come in, faster than I had anticipated. We watched as the path disappeared around us, frantically heading for home as we walked over slick seaweed and wet rocks. We were both really worried: Paul visibly so, but I just pretended that we were going to be alright. I don’t know if he remembers it, but I’ll never forget that day. I thought we were going to die, and after that day I was even more fiercely protective of all my brothers- unless I was the one beating them up, of course.

Those times have gone. Now I live away from ‘home’ and I only see my family at Christmas, or if I’m lucky, a cheeky break in the summer. My brothers have all grown up- two are in great relationships and have jobs, while Mark is going to university in the autumn. I’ve gone from being the big brother to the shortest of us all. We all have different lives, and although I want to spend time with my family, it feels wrong to demand too much of theirs. I am an interloper, appearing up to dish out platitudes and criticisms before fucking off to Oxford again. I hope they don’t see it that way; I am not trying to be that guy. I am just playing the big brother, even if I no longer need to.

Last winter I missed out on two of my favourite bands, In Flames and Dream Theater, in the space of a fortnight. I was devastated! Determined to not miss another opportunity, I started looking into festivals, since I’d never been to one. Download was pretty much the perfect line up, including Soundgarden’s first UK gig in fifteen years and Black Sabbath reforming. I know I haven’t talked about the music, but trust me: it was fantastic in the literal sense of the word. I persuaded my family to go, which really wasn’t that difficult at all. Paul and his girlfriend Ashlin were up for going, as was Mark who always has inexplicable bottomless cash reserves.

Daniel was harder to persuade, but offering him a short term interest-free loan for the concert tickets was a good enticement. I know Daniel’s girlfriend was unhappy that he decided to go to Download, so if she reads this I feel the need to explain. It is a deeply selfish reason, but I really needed us all to be there. It was important to me, and I would have paid for his ticket if that’s what needed to be done. I’ve felt a disconnect over the past few years that I just couldn’t stand any more: I missed the good old days, those friendships I relied on.

Download was the best way to get everyone away and spend some quality time together. Listening to a band is ten times better when your friends are singing along beside you. Freezing in a sleeping bag on a wet Saturday morning is tolerable when your brother is hilariously stuffing his face with banana sandwiches for breakfast. Good nights become unforgettable ones when you’re inexplicably laughing at Titanic quotes and drinking cheap beer by torchlight. You’re not dredging up old memories: you’re making new ones to complement the old.

As well as arranging the Download trip, I wrote to my brothers as part of the ‘25 Letters‘ project. I was scared, because I didn’t know what responses I would receive or if they would just laugh at the idea, but when I read their replies I was so proud of them and the friendships we still had. Reading those letters, I realised those bonds were unbreakable. I am fortunate enough to have close friends in my life, but my brothers will always be the best of them.

Not everyone is lucky to have led as privileged a life as mine, but when I think about it, my brothers are the greatest privilege of all.