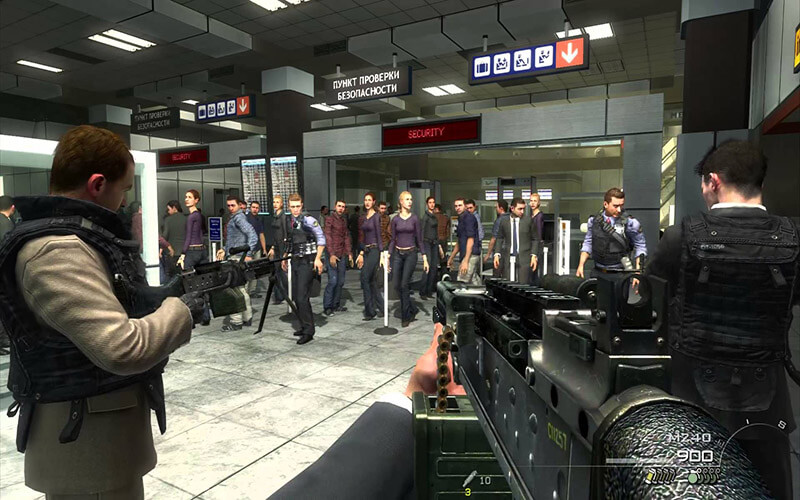 When the little Modern Warfare 2 box popped up not once but twice alerting me to the potentially offensive mission to follow, I was giddy with excitement. I’d heard the disturbing rumours and I was in. Titled No Russian, this now infamous mission has the player- acting as a covert CIA agent who has infiltrated a Russian terrorist cell- take part in the killing of civilians in an international airport.

So it’s par for the course so far then. If you tallied the number of pedestrians I’ve run over- that we’ve all run over- in Grand Theft Auto, you’d know that this isn’t the first time that we’ve got the digital blood of the innocent on our hands. So let’s not dwell on whether or not No Russian should even exist and instead let’s look at why developers Infinity Ward are one of the few who could actually pull something this controversial off.

For starters, they have slipped in challenging material into their games in the past. Sitting alongside the bombastic military set pieces from the first Modern Warfare (think 24 meets Rambo), the developers managed to weave in some intellectual content.

Few action games and movies have detonated a nuclear bomb in a city, only to shift perspective to a doomed soldier on the ground caught in the inner blast region. A mission where players assume the role of a cockpit gunner in a Spectre aircraft strikes a similarly unsettling chord. Viewed through thermal imaging monitors, buildings and squads of troops are levelled with single shots from the massively overpowered artillery all to the morbid background chatter between the gunner and pilot- “Smoked that guy”, “We got a runner. You got him”. The abstraction this creates is entirely unpleasant.

All this was fairly implicit and sat behind the main shooty-bang-bang action which had always been the main intent. It doesn’t get more explicit than transplanting the violence into an international airport.

The massacre of No Russian begins as soon as the elevator opens and you waltz into the airport foyer together with your new terrorist buds. The brutality with which they open fire on the crowd is devastating. A crowd of forty or so innocent people are murdered in a few seconds. And now, gun in hand, you are forced to stroll onward through the corpses to marvel at the horrific carnage on display.

Your options? Well you could shoot the terrorists but they’ll kill you in turn, failing the mission.

You could not shoot and simply enjoy the sights and sounds that Infinity Ward’s team of designers, animators, artists, programmers, sound engineers and producers have lovingly crafted for your enjoyment: the panic and confusion fuelled by the screams of fleeing survivors and the cries of the wounded left behind as they clutch their dead family and friends right outside the departure gate. It is one of the most harrowing images I’ve ever seen in a game, I’ll give them that.

Or you could become complicit and take part in the massacre because, hey, at least it’s something to do right? Why else wouldn’t they just include this as a cutscene?

*Only the No Russian level. Yes I’m allowed to review just one level.