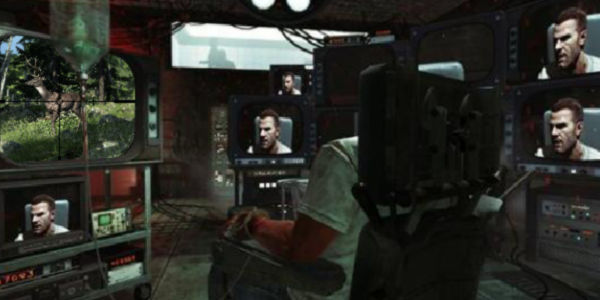 I wake up strapped to the chair. They’ve clamped my head and my neck is bolted upright. I’m forced to stare at the TVs, their barrage of seemingly random footage attacking my senses; numbers cut to maps cut to news reels cut to footage of me.

I wake up to the sounds of the forest. I squint through the sunlight at the lush woodland. I don’t hear it yet; only birdsong and a soft wind. I pick a direction and start to walk.

I’m in Cuba, it’s April 17th 1961, my name is Alex Mason and all hell has broken loose. The fight in the bar sends us crashing into a side alley. Fighting our way toward an abandoned car, we leap in and hit the gas. We’re under heavier fire now, from every direction it feels. I’m right in the middle of bursting through a second barricade of armed guards when, without warning, I white out and I’m back in the chair. The Interrogator tells me I escape and that I was heading for Castro’s mansion. The Interrogators electrocute me; the blinding flash fades with me standing on the side of a mountain, my hand on a zipline, ready to storm the mansion.

I’m somewhere in Washington State, deep in the woods. I am a hunter. Alone except for my binoculars, rifle and my wits. And my HunterMate GPS unit which identifies tracks, animal calls and deer shit. I’m new to this but I know a little: Step 1: Locate and Track, Step 2: Position, Step 3: Shoot, Step 4: Confirm the Kill and to always, always Avoid Detection.

Having failed to assassinate Castro I’m taken prisoner in a Russian POW camp. It’s now October 6th 1963 and all hell has broken loose. I am escaping with my new comrades and all is going according to plan. There are eight steps: Step 1: Secure the Keys, Steps 2-7: Shoot Everything In Front Of Me and finally Step 8: Freedom. I am a trained covert operative, part of the highly-classified Studies and Observation Group. Little did I know that soon after harpooning down that helicopter I’d graduate to dropping a launched Soviet spacecraft.

As I walk through the forest, amidst the many plants with names foreign to me, I look but not with my eyes. The soundscape is rich, full, alive. I know you’re out there. So where are you?

As I walk through the halls of the Pentagon I can’t help but feel that the Interrogators have made the nefarious plot a tad too obvious. I’m spared from the Frankenstein caricature of President John F. Kennedy by hallucinations that pierce reality in beautiful ways. I try not to listen to his warbled drone as the walls speak numbers and flash Lee Harvey Oswald.

I crouch behind the grassy knoll, take out my fake deer call and squeeze out an unconvincing, toneless bleat. Something answers my call; somewhere in front of me according to my HunterMate. I look down on the tall grass along the open field and try to let my eyes settle, alert to the movement coming my way.

I look down the winding trenches toward the great dusty expanse and I don’t understand what is happening. “Take that trench, Mason, take that trench!” Well I’m there, at the giant flashing marker firing into an endless queue of Vietnamese soldiers jogging fresh out of the mist. I can’t see where to go next. My men are further behind me. I’ve somehow ran too far ahead. I’ll need to go back and trigger the next move. Again. I steady my aim, take a breath and pull the trigger and miss. The startled deer shoots across my vision and disappears from sight. I could try chase it down but there’s no point, it will have ran too far ahead. That was strangely intense. Walk don’t run, track don’t wait, and breathe. Remember: One long, deep breath before firing.

I take a quick breath and reload from the last checkpoint. I’m constantly caught off guard as to when I’m in control and when I’m merely an actor, my strings being pulled by the omnipotent director. Sometimes I’m allowed to walk; sometimes they lift my legs for me. Sometimes I choose my attack; sometimes my gun is muzzled and I choke a man with wire I never knew I had. I am fine with choosing only what is chosen for me, but there are times when even that doesn’t matter. Today, during take-off, I flew a jet without pulling back on the analog stick, even though they told me to. These machines fly themselves, these days.

I receive some harsh words from the park ranger and a caution concerning my “inhumane actions”. Park rules state to always confirm and harvest a downed animal. Guess I hit the deer after all. I didn’t even check for a blood trail- it felt too far away to walk.

Did I really need to force the communist doctor to eat broken glass? And why is he sticking around to help me? Sad how with one high-octane, dramatic set-piece after another that this is the stand out moment- this is their nuked helicopter, their airport massacre.

Finally. Up ahead where the dust track curves stand two deer by the side of the lake. I lower my binoculars and step away from the middle of the road.

I can’t think clearly about where I’ve been let alone where I am in the story. It’s all an averaged blur; one long stitched together series of second-hand clichés. It’s Vietnam, here’s the Rolling Stone’s ‘Gimme Shelter’ and that scene from Deer Hunter. It was worth ditching the first, old set of tracks for this fresh set that went up by the dustier path. The map did say there was a lake over there but I wouldn’t have thought myself this lucky.

Finally the Interrogators reveal the nefarious plan. Must they keep repeating it? We’ve watched the scene twice, from two different angles. It was quite a cool bit of storytelling- one that should have been used earlier on.

I crouch into position.

They’ve explained it again. Look it wasn’t that clever. I kinda suspected as much. And if that’s the case, then why are they letting me stick around to help with the final mission? I am the walking definition of a national threat.

I steady my aim.

Of course the secret mission is underwater.

I take a long, deep breath.

Of course the base is going to blow up.

I squeeze the trigger.

Yeah no shit we need to get out.

I sit strapped to my chair. They’ve clamped my head and my neck is bolted upright. I’m forced to stare at the TV while their barrage of seemingly random footage attacks my senses; flashbacks cut to present time cut out of first person to another perspective that cut apart missions with arbitrary black outs, white outs that squander momentum and deny resolution.

And in service of what? A shoddily edited, horribly written, derivative conspiracy with such clumsy foreshadowing they give away their only interesting plot point within the first hour. Even Michael Bay can tell a story straight.