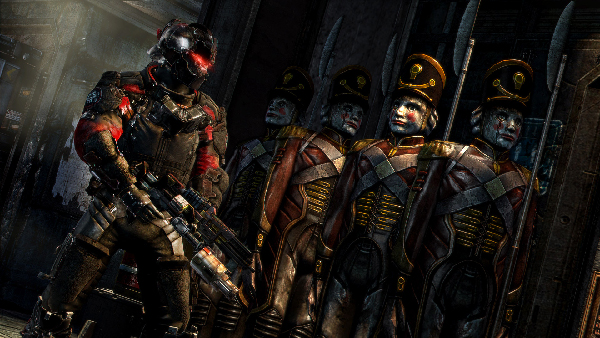 Bro, how much can you bench?

Dead Space 3 chilled me to my core. Though I was never scared while playing. No, the paralysing dread hit one year later while driving alone at night on a desolate stretch of Scottish countryside, the moonlight casting doubt over the bends in the road ahead, when I was horrified to realise Dead Space 3 was basically Diablo.

Good god. How did this happen? What unholy horror tricked me into bed with a dungeon crawler? What sicken spell transformed me into a depraved loot chaser?

There is certainly activity happening but damned if there’s any real progress. Each step is ultimately the same as the first and most often is to the tune of the left mouse button clicking. (Synchronise the mouse clicks with the clock ticking on your wall to really mark the passage of time with gusto.)

I don’t like having my time wasted and few other genres take glee in doing so than a loot chaser. And I’d fallen for one. My mother warned me about this. Diablo, DeathSpank, Torchlight, Too Human, Costume Quest and, of course, World of Warcraft: I’ve tried them, I’ve not liked them, I’ve hated myself afterwards. I hasten to call any of them RPGs because I rarely play out any role other than that of a kleptomaniac soon to star on Hoarders or Pawn Stars.

That’s the loot collection thread established. Hold on to that while I tug the Dead Space thread in this direction. I loved the original Dead Space very dearly: the floating HUD projecting from Isaac’s suit that pulled me into his damned world; the pivoting welding gun that cut a path through the disfigured necromorphs; the hand-projected map illuminating an emergency exit line down dark corridors I daren’t travel; the crystal clear sound of a steel spaceship creaking, pipes clattering and victims screaming; the serene silence of outer space.

I dream about the Plasma Cutter. I played the entirety of Dead Space using only that Plasma Cutter not for challenge but for the continued joy of pivoting the shots between a vertical and horizontal slice. Whether choppint up necromorphs or killing time waiting in elevators by lining up the sights I was forever toying around with that simple gun.

An old episode of Retronauts gave a rather elegant definition of the survival horror genre: survival horror is any game that incorporates an element of dread to create a psychological barrier than must be overcome in order to proceed. So it’s not just mutilated ghouls from beyond or scarce supplies that make a true survival horror.

Standing alone, perfectly safe but wholly anxious about proceeding into the darkness of the doomed mining ship USG Ishimura, Dead Space was the first survival horror game I fell in love with.

A powerful love indeed considering I skipped playing Dead Space 2 entirely- I had this misguided stance at the time to avoid sequels, the same moronic ideal that led me to declare Batman: Arkham City the coveted “Best ‘Game of Last Year’ of the Year” award at the 2012 Screenies when I finally got round to playing.

When it then came time for Dead Space 3 and I heard the Big Talking Points were cooperative play and customisable weapons I sighed. I sighed loud and long in a way that captured in text reads “pfffffffff”. The Dead Space series, much like Resident Evil, had evolved from survival horror into a full-on action game. Gone was the creeping isolation and jump scares replaced with an automated shooting gallery of pop up necromorphs stuffed full with ammo and customisable gun modifications. Gone was limited firepower for near endless combinations of firepower through customisable gun bits that meant every gun could become a pivoting plasma cutter-esque device.

And that’s where Dead Space 3 surprised me completely: I dug building new guns at the weapon benches and showing them off to my cooperative compadre in game. Bash a bunch of necromorphs like a Halloween piñata, gather up the loot, run to the nearest weapon bench to stock our inventories and modify our firepower: a game of shopping for gun bits between benches. Operating those benches was more satisfying than it deserved to be.

Much like World of Warcraft there are raid dungeons: optional side missions in coop play where at the end of each a treasure chest of loot lay as its reward. The only memorable narrative evoluition in the series happens in these cooperative side missions. One player encounters traumatic hauntings while the other player sees nothing. It was very cool having to describe the visions I was having to my friend who saw nothing out of the ordinary.

Still none of this scared me at the time. I suppose this makes Dead Space 3 like that videotape in The Ring: something from many moons ago that I could have written about back when it was relevant.