I used to play this at school. We’d draw some dots in the back of our school book/jotter and take turns to see who could make the most boxes without the teacher noticing.

I set a goal at the start of the year to develop and release a videogame. For all I’ve written and designed about videogames, it was simply a matter of time really. Enjoying, discussing and dissecting videogames into their constituent parts inevitably leads to the desire to assemble one for yourself.

Now, I’m not a programmer. I’ve written some code way back at university but, like my (terrible) long student hair, it’s almost all but faded from memory. That being said, I remain comfortable in the presence of code much, in the same way, I’m comfortable navigating mainland Europe providing their language is based on the Latin alphabet. I can look at code the same way I look at, say, Portuguese and bit by bit I slowly spot familiar loops and conditions and I can parse my way to understanding what is going on. Then I Google the rest. Comfort gets me a long way.

I’ve toyed with game ideas before: A text adventure where it is revealed you are actually in the town of Pripyat the morning of the Chernobyl meltdown (this was years before the HBO show); a black box platformer where each level has different surprising mechanics that the player has to discover (this was years before EA ruined the term ‘surprise mechanics’). Oddly, as a professional project manager, I didn’t do any planning before starting to make these game.  So it’s not surprising I didn’t finish a project. 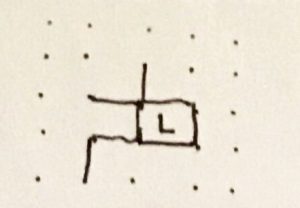 I knew to keep it simple. Simple like a game you play at school. Which is when I realised that I had not come across a digital version of an old pen and paper game I used to play at secondary school. I think we called it Boxes, or maybe it was called Dots. You draw a grid of dots, you each take a turn drawing one horizontal or vertical line between any pair of dots, of you complete a box you win that box and get to take another turn.

While watching TV with my wife on the couch, I sketched out the basic flow, scope and started to identify how I was going to program the various objects/rooms/mechanics. When it came to features, categorising them along a line of ‘simple’ to ‘fancy’ helped keep me focused.

In almost all cases, the ‘fancy’ ideas weren’t used and would have either complicated the development or ruined the game. Creating a dynamic grid where the player can set the size seems like a no-brainer. As a player, I tend to always want options presented to me. But here the grid size determines how long it takes to play a game. The final version is a 6×6 grid and takes roughly 5-8 minutes to play. A 7×7 grid pushed the game time to over ten minutes. So a static grid was simpler and, hopefully, leads to a better experience.

Probably should have figured out how to cram loot boxes and micro-transactions into the game though for some extra ca$h. Maybe unskippable ads between every mouse click? Perhaps I’ll do that in DotBox 2 when I partner with EA. 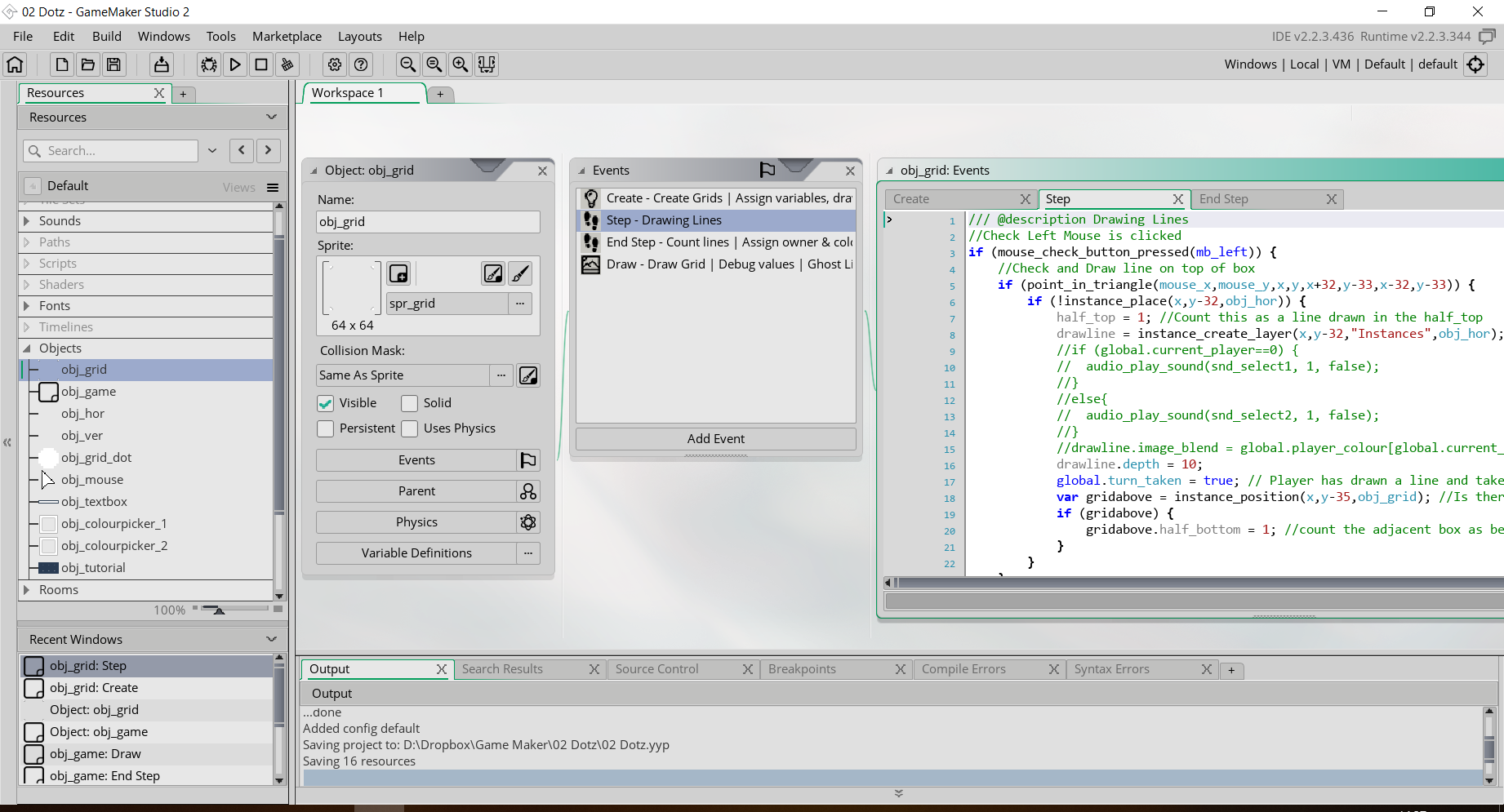 I programmed the game in GameMaker Language (GML) using GameMaker Studio 2. GML is GameMaker’s scripting language and according to Wikipedia is “an imperative, dynamically typed language commonly likened to JavaScript and C-like languages”. For me, GameMaker suits my needs and comes with a number of helpful out-of-the-box features for making 2D games.

Checking the stats page GameMaker insists I spent 43 hours developing DotBox. Now, this is time when GameMaker was open on my desktop so I reckon a more reasonable development time is around 30 hours. It came together over three or four weeks, spending an hour or two in evenings and on weekends, programming the game.

I should have taken more screenshots of the work in progress or kept a DevLog (which I will do next time). I set realistic goals for each programming session and that helped keep me motivated because I saw progress every time I sat down. Occasionally a session would hit a roadblock. Implementing the text input for the player to write in their name was more complicated than I expected. Here I leaned on YouTube tutorials to hack together something that worked for me. Otherwise, I’m proud to say I programmed this game solo, using only the GameMaker documentation (you can see from my paper notes I identified certain functions like point_in_triangle or object_at_place before I’d written any code).

These two screenshots are the only work in progress shots I have. All the colours are the standard GML colours. I tried to follow the example led by the Plants vs Zombies and Braid development and use programmer art (i.e. basic placeholder art) for as long as possible. I was entertaining the idea of maybe having the game look like pen and paper but ultimately decided that I enjoyed the crispness of the final colour palette.

I’m very happy with DotBox. I’ve achieved a goal for the year and it’s certainly exercising the same creative muscles I haven’t really been flexing since we finished up with Five Out Of Ten. I’m not sure what to make next but I know for sure that I can do it. I’m an independent game developer. Quick! Time to make Kickstarter that over-promises and under-delivers!