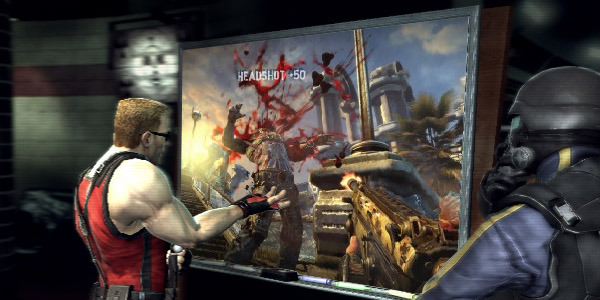 How to save Duke Nukem.

The most obvious questions regarding Duke Nukem: Forever are those of relevancy. Of course there’s the Duke himself: the aged shocker’s scandalous quips and one-liners have all the bite nowadays of a young Stewie Griffin. The whole machismo and lewdness of it all seems seriously misjudged as well. Not that every other FPS isn’t powered by the same crude man-fuel but here it almost looks like they’re trying to be funny in an ironic or so-bad-it’s-good way which rarely lasts.

Of its relevancy, given the fabled 14-years in the making, multi-million dollar development, I say this: I bought Guns n Roses much fabled 13-years in the making, allegedly $13 million album Chinese Democracy. It was alright. So-so. Patches of brilliance (see ‘Better’) but otherwise completely unremarkable given the legendary status bestowed upon it by writers, reviewers, critics and morons.  There was much talk of its release but of its impact and lasting appeal? This is the first time you’ve read about Chinese Democracy in years, right? Think about it, if you have any grey matter left. Bulletstorm was a shooter with the twist of a points-based race. It’s about how you kill the enemies- chaining them together in combos of headshots, whips and kicks to the groins- with the over-the-top badittude that places Bulletstorm closer to Mortal Kombat and Gears of War than more reserved The Club which did all of this, without the funny Skillshot names, a few years earlier.

And changing the basic shooter formula is the only way to make Duke Nukem: Forever relevant.

Bulletstorm’s sport-shooter makes more sense in Duke Nukem’s world than its own. Duke’s been stranded on that alien planet for so long and he’s killed entire populations of alien scum that he’s no longer satisfied with just killing them. This isn’t about survival or saving the world and the girl. It’s something more important: this is Sport. Each kill is a way of measuring how big the big man really is and satisfies his own perverse amusement alone.

And should it save the world and the girl in the process then that’s a bonus ‘cos the Duke needs to celebrate after the big game. F yeah.

But you won’t be reading my much fabled Duke Nukem: Forever vs Bulletstorm review. Because I’m done with shooters. The thought of playing two new shooters bores me now. Especially given I own the two greatest.

I play Call of Duty almost every night- Modern Warfare 2 originally and now Black Ops. Love it to bits. In many ways it’s my World of Warcraft: a way to keep in touch with friends and chat while popping smoke grenades over claymore-laden doorways in team deathmatch. By the way, I call that trap a Baked Alaska and it never fails to amuse.

I play Team Fortress 2, whenever I can afford to pay the obligatory 120MB Hat Tax. In spite of all its needless and baffling accessories, it’s still the most beautiful and elegant shooter ever made. Distilling all the tropes of the genre into a colourful Pixar-esque world of Red vs Blu just because means Team Fortress 2 will age gracefully (granted gaining unwanted weight) compared to the annual botoxed, touched-up editions of Call of Duty.

If the game involves shooting bad guys with some type of gun poking out the right-hand corner of the screen count me out. I’ve done it. To death.

Admittedly, what I’ve said above is essentially how many Duke Nukem: Forever reviews will play out, albeit gussied up with in-game terminology, screenshots and some really bad puns.

My point about the need to revitalise Duke Nukem with a novel gameplay/design approach may well have been the only unique contribution I could make anyway. And if you aren’t trying to say something new then why bother? That’s one for all you reviewers/developers of Duke Nukem: Forever out there.