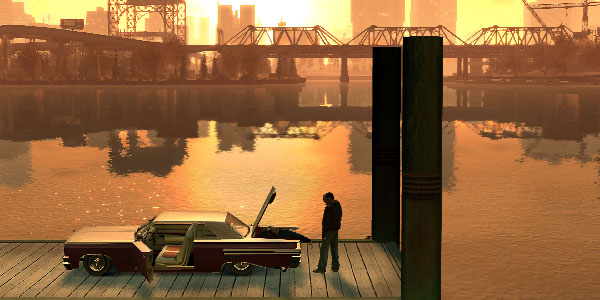 It’s official. Grand Theft Auto IV is a video game blockbuster, with gamers around the world buying up more than 6 million copies of the gritty, urban action title in its first week of sales  – CNN, one week after release

Grand Theft Auto IV is the highest critically rated video game of all time. It garnered universal acclaim and scored highly across gaming publications and websites. Three years since its release GTA IV remains the number one title on review aggregators Metacritic, TopTenReviews and Game Ratio.

Grand Theft Auto IV has reportedly sold over 15 million units since its release in 2008  – Next Gen, two years after release

One of the many things that set GTAIV apart from its predecessors is Liberty City, which is more convincing as a living, breathing urban environment than anything that you’ve seen in a game before  – Game Spot

Yes, there’s still the freedom to cause havoc, and inevitably you do; the difference is that you’re no longer impelled to toy with GTA IV’s world in quite the same sadistic way – you live in it  – EDGE

The most common theme across all reviews is the notion that Liberty City is a living, breathing city.

The idea of a ‘living, breathing city’ has always been somewhat of a joke in gaming. Every city in the past has felt artificial in some way. But Liberty City feels like a real place. The art team gets major kudos for creating a living world – IGN on GTA IV, 2010

But in no way is this a new or particularly Earth-shattering claim:

Indeed, Grand Theft Auto is the start of something big. The AI characters interact smartly with one another, the cars are varied and react to different weather patterns, the missions are abundant, and the three-part city, a living, breathing organism, is massive. In fact, one could say the city is the heart of the game – IGN on GTA III, 2001

Now Liberty City is indeed an impressive spectacle. It traded the sprawling open terrain of GTA: San Andreas for a smaller, denser and highly realised urban city. The boroughs show only subtle variations between them with litter filled alleyways as detailed as the iconic New York-inspired landmarks.

Artistic merits aside, Liberty City is in no way a living city. It certainly is not a simulated one. Its verisimilitude is akin to that of The Truman Show; pedestrians wander with no agenda, garbage trucks drive past dumpsters every morning, commuters wait at bus stops for buses that never come and the next day every one resets to first positions and the scene begins again with a different set of pedestrian animations.

When viewed from the back seat of a taxi, Liberty City is breathtaking. As an interactive sandbox in which to play, it’s sadly more of a vacuum than previous GTAs.

All in the details

There’s a lot to see and do and, like New York itself, very little wasted space. The only frustration is that there are literally thousands of buildings in the city, but most of them cannot be entered – IGN

Outside of the missions there really isn’t much to do this time round. Packaged mainly as activities to do with Niko’s friends bowling, pool and darts are so-so while eating, drinking, strip clubs and cabaret clubs cue up more cut scenes.

The escalation of world detail over previous GTA games is phenomenal. Now you can go to internet cafes, swap emails and look up Liberty City’s various institutions and businesses on the web – EDGE

Navigating the internet and typing on a QWERTY keyboard using an Xbox 360 controller is a form of Chinese water torture with the constant dead-ends and dick jokes sufficiently shallow enough to drive anyone insane.

You could lose hours of your day surfing the ‘net – IGN

The writing makes a mark not only in quality but in quantity: missions have multiple dialogue options so that you don’t have to listen to the same lines on each replay, and even the GTA tradition of barking pedestrians throws up few repetitions – EDGE

There are no hidden packages, the jumps are fewer and less conspicuous. GTA IV manages to coax you away from casual mayhem by loading you with more meaningful commitments – EDGE

There are 200 hidden packages. The jumps are fewer and less conspicuous and hence less likely to encounter and, god forbid, enjoy.

In previous GTAs the criminal hunting Vigilante mode is initiated with a single button press upon entering a squad car.

In GTA IV the police computer is a menu containing four lists. Playing Vigilante now takes between a minimum of three and a maximum of thirteen button presses.

Originally Vigilante was a rolling series of escalating chases with rewards in the form of police bribe tokens and armour boosts. In GTA IV there are 30 mutually exclusive ‘most-wanted’ criminals and a replenishing choice of three ‘current crime’ reports. Resolving each crime ends the side-mission requiring another journey through the police computer to continue playing.

Similar modes existed for the fire fighting and ambulance driving but are absent from GTA IV.

Such stuff is perhaps trivial in isolation, but in aggregation creates an unrivalled sense of a living city – EDGE

A story of sacrifice

While the dialog and voice acting are at the high end of what we’ve seen in video games, there’s still a clear difference between this and a B-level Hollywood production – Game Daily

The main problem with GTA IV is that they went for a darker, grittier and more grounded tone in the story and world. Whether inadvertent or not this killed a lot of the GTA fun I’ve grown to love.

Rockstar North actively discourages goofing around in GTA IV. You can still steal cars and run over pedestrians for the hell of it but escaping the ensuing wanted level is now more difficult. The revamped area of surveillance system essentially means there is nowhere to hide on the higher wanted levels, which can rarely be escaped or reduced thanks to awkward positioning of Pay n Spray shops and the complete removal of police bribes. Hijinks lead to chases which in GTA IV lead to a prompt death which leads to hijinks no longer being fun.

It excels in creating a genuinely cinematic atmosphere, with writing on par with anything Hollywood can produce and action sequences that would sit comfortably in any movie – Thunderbolt

GTA used to be a great example for emergent gameplay. A classic mission in GTA III involved assassinating a heavily protected target as he leaves a strip club. A common alternative solution was to park a load of cars in the alleyway before accepting the mission and then simply toss in a grenade and let low-rent physics do the hard work.

In GTA IV the world resets before every mission. So anything you do outside of a mission is meaningless. Missions are to be completed exactly according to the vanity of Rockstar North. Even though you’re chasing down a target escaping on a bike, and you’re shooting his open back many, many times, and the point of the mission is to kill him, you’re not allowed to kill him until after witnessing the visual delights of their prolonged and tightly choreographed action sequences.

The main campaign is great and offers everything you’d expect from GTA in terms of the rags-to-riches tale of a criminal. Niko arrives in Liberty City in search of someone from his past and the lucrative promise of the American Dream.

While the pursuit of money is often the character’s motivation, it’s always been this strange elephant in the room. I finished the story with a little over $1.2 million, having spent $100k on weapons, $8k on taxis, and $4k on clothes. You make so much money so quickly that it’s easier to never address this when telling the story of a down-and-out immigrant living in shitty apartments.

As an added twist, GTA IV gives you occasional morality choices. And there are some gut-wrenching decisions you make at points that create an emotional response I never imagined I would get from a Grand Theft Auto title. There are two worthwhile endings to uncover and are incentive for playing through a second time just to see how much more depressing life in Liberty City can get – IGN

Of the seven loud, flashing binary decisions forced upon Niko, six involve either killing or sparing a character with four of those offering no reward either way.

The only meaningful decision, however, is handled superbly. After either killing the elusive Darko Brevic in cold blood, confirming Niko’s doomed life as a gangster, or opting to walk away, offering Niko some redemption for his horrid crimes, the credits should have rolled. Emotionally this is the climactic conclusion to Niko’s story.

But in usual fashion GTA overstays its welcome and ends with a ludicrous bike/helicopter/speedboat chase in order to kill a Mafia boss who flees to the Statue of Liberty.

Of tangential benefit to this is the increased sense of physicality – car impacts feel really weighty, be it with another vehicle or a pedestrian’s head, and combat has real heft too, both armed and unarmed – EDGE

This quote serves no real purpose here. I just enjoy how much they sound like a psychopath.

The sombre single player world is fine considering GTA IV has extensive multiplayer in which all the colour and insanity and fun can live.

Finally, the wait for a true GTA multiplayer experience was well worth it, and the online game modes (mostly variations on deathmatches, car races and self-contained co-op missions) add a lot of value to an already jam-packed game. We’ll have a more in-depth take on the game’s multiplayer offerings once the game is released and the servers are fully populated – Game Daily

Then by pulling up your mobile phone, you can select multiplayer. Regular and team deathmatch come down to knowledge of the terrain but the team-based Cops n’ Crooks is an instant hit, and others like GTA Race are more than they sound. Then there is Free Mode, which lets you do whatever you want in Liberty City with up to 15 other people, and leaderboards for all. (Look out for more thorough commentary on GTA’s multiplayer post-release.) – Eurogamer

I won’t go so far as to say that GTA IV is the best multiplayer out there, but it’s definitely among the best – IGN

Perhaps I’m wrong. Perhaps it’s my shoddy internet connection and there is a thriving multiplayer community out there. Perhaps there’s a way around the black box lobby system and find players. Whether it’s on PC or console, if you can get a multiplayer game going which isn’t straight deathmatch then I envy you. Because you are playing the GTA IV I want to play.