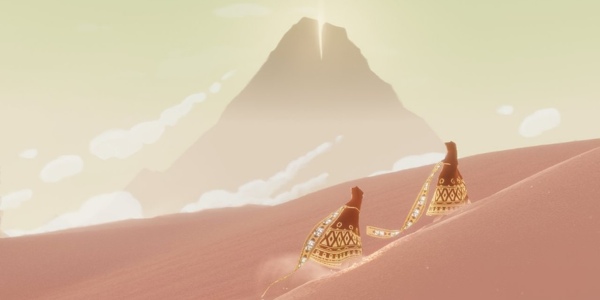 I’m in a bar with the girl I like. I want her to like me. I’ve decided the best way to do this is by talking about video games. I’m talking about Journey and struggling to find the words- not great for a writer, really.

“Umm, uh, well it’s hard to describe really, it’s one of these things I don’t want to spoil but uh, it just makes you feel… do you want another drink?”

“Words cannot describe…” When you’re a writer, you feel like words must be able to describe everything, because your mental well being depends upon it. A wordless writer enters a state of thought paralysis, unable to convert the intangible into the tangible. It’s often called ’writer’s block’, but it’s never felt like a block to me: it’s more like you’re hanging from a rope in the school gym and unable to traverse to the next one. With no momentum, you remain suspended and static. The next thought is right there, tantalisingly close, but you just can’t grasp it.

Journey is, superficially speaking, easy to explain. You can talk about the glistening desert sands that ripple as you slide down them, the magic carpets you befriend reminiscent of Disney’s Aladdin, mystic ruins and icy wastes. In the distance, a mountain calls to your shrouded pilgrim, and there’s nowhere else to go except towards the glowing summit. Yet in the same way a camera shows only a snapshot of a landscape, a description of a journey doesn’t let you walk its path. There are no video games tropes here: no high scores, game overs, ham-fisted dialogue or even much of a story.

There is no explanation for why we are ascending this mountain: we summit Everest because it can be summited. That’s reason enough.

Strangers come and go from this world. They look just like me, same rags and glowing scarf. I want them to like me. Yet I can only speak in abstracted verbalisations, where tapping a button makes my character sing. “Words cannot describe” is exchanged for another cliché: “I have no words”. My partners and I chirp at each other, trying to convey information through monotonal rhythms. Some partners echo the noises I make and we walk through this haunted world together, while others ignore me.

The constant coming and going of fellow pilgrims on this journey mimics life: they are the strangers at the bar, the colleagues you meet on a new project, stumbling through the world and colliding each other until someone catches your eye that you feel compelled to befriend. Without having learned to communicate with them – from non-verbal nods and knowings to finishing each other’s sentences – your language becomes as abstract and stilted as your little shawled game avatar.

Journey is a game about building relationships. What really matters in life are the relationships we make, not the mountains we have chosen to climb because we assigned meaning to the climbing. Like life’s journeys, the game is easy to describe in terms of what you see and how you feel, but such descriptions fail to capture the holistic nature of the experience. You and I could walk the same steps through our journey with the same people, but it would never be the same.

This makes it a difficult game to assess because you’re describing situations another player may never encounter, but unlike the random dice rolls of Civilization and its malleable computer opponents, real people aren’t so easy to manipulate. After all, you can’t even speak to them, and the first step of giving orders is surely the ability to give them.

I have a crush on this game. I am infatuated with it. It consumes my thoughts for a couple of days. Like all crushes, you are loathe to start the journey again with another person: you want that initial encounter back to savour it again. I asked my friends on Twitter whether one should only play Journey once and and cherish that single memory. I received the reply “but how else would you get all the trophies?”, which is a very video game way of discouraging settling with one partner.

I’m struggling to find the words as I’d equally struggle to describe a crush to someone who’s never had one: the girl’s initial question of “why do you like it so much?” could just as easily have been ”why do you like me so much?”, and both those questions lead to me staring sheepishly at my shoes and searching for a means of interruption.

After I completed my first journey, I received a friend request and message from one of the pilgrims. “What did you mean by the single note?” they asked, referring to my mysterious utterances. No longer confined to the enforced silence of the game world, I still didn’t know what to say. I guess I didn’t mean anything by a single noise, or even a sequence of them. I wanted my friend to know that my intelligence was not artificial, that I was real. Most modern games offer a range of expressions, from voice chat to the nuanced controls that have led to the rise of machinima, and Journey’s stripped-down sound-barking and scarf-flapping make me anxious.

Ordinarily, I put tremendous effort into communication. This essay will have been redrafted five or six times before you read it, each sentence scrutinised and forced to justify itself. Even day-to-day conversations have some degree of forward planning as I try to wedge in a terrible joke I concocted earlier. The vagueness of Journey’s communication is threatening to me, because if a mere chirp is as expressive as an entire paragraph, it suggests most of my communication is wasted effort. Yet ultimately, the reason I communicate in the game is the same reason I am writing about it now: I am shouting into the darkness hoping that someone will hear me, understand me, and echo back.

Somehow, in spite of my crude mix of video game palaver and flirting, the girl and I start dating. One day at my place, she asks to play Journey. It’s interesting to watch a newcomer play games, one who doesn’t instinctively target an enemy’s head or grind against walls looking for swag and secrets. She can come to it as a tourist in a foreign country and enjoy the sights. My impressions are in the contextual and critical frame of the hundreds of other games I’ve played, and that’s not always a good thing.

Her challenges are different from mine. She’s anxious about jumping between platforms and navigating tunnels, but the lack of nuanced communication is inviting for her where I was fazed. I am well-versed in the language of games: I know the names of the buttons on the controller, I can explain my surroundings in terms of previously-encountered paradigms. The age of constant voice chat is unforgiving to a newb, especially when they don’t even know what a ‘newb’ is. In a world of one-note conversations, we are equals.

She’s walking the same paths as I, but our journeys are not the same. One of the great thing about video games is that both what you experience and your impression of that experience differ, which makes for great conversation. Even in a game that is arguably ‘linear’ like Journey, each playthrough has a unique story that is a product of the player, the pilgrims they meet, and their route through the environment.

I feel the same optimism in Journey as I do in my new relationship. We’re walking the same path, two pilgrims ascending a mountain. Our anxieties are different, framed by experience. We learn new ways of communicating that move beyond mere verbalisation. Around every corner, there’s an unexpected new horizon. We hope we’re heading for the same destination.

But it’s not so much about the destination. It’s about the journey.

This article was originally published on Nightmare Mode.