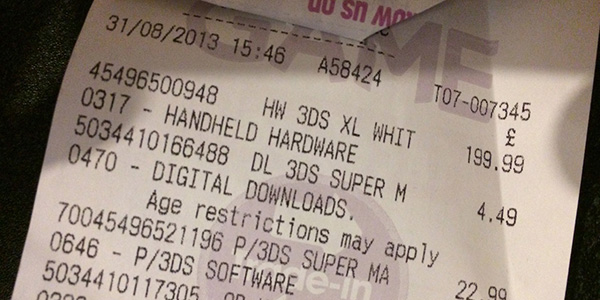 Not Buying – The Results An attempt to avoid buying games: a post-mortem

Back in February, I decided to stop buying new games for the rest of the year. This had… mixed results. At the time I wrote that I had Dishonored, Binary Domain and Dark Souls all sitting unplayed under my television, and well… They’re still there! I caved and bought BioShock Infinite on the week of release so that the story wasn’t ruined for me; but unfortunately, BioShock Infinite’s story ruins itself. I also bought a 3DS because I really wanted one. But that’s it! (Almost!) I received a few games as gifts over the year – at a low point my girlfriend gifted me Ridiculous Fishing, either out of sympathy of because she was sick of hearing about it. I made a list of every game I would have bought, but didn’t. Here are the results:

iOS games that don’t count (even though I said they did in the original article):

So the real question is: did it work? Was I able to clear a few games off the Pile of Shame, or is my life destined to repeat itself like a nightmare sitcom? Here are all the games I completed – or at least, played to the point of resignation – this year:

I’m currently playing Spelunky, Metal Gear Solid, Pokémon X, Super Mario 3D Land and Sonic and All Stars Racing Transformed. Not a bad effort, but the positives were more than just saving some money and having less guilt about my material possessions. Last year, I felt like I was ploughing through games just to ‘finish’ them: Vanquish is still in the Pile of Shame because I want to give it another playthrough on Hard, for example. I was reviewing a lot of games at the time, which didn’t help, and it started to feel like a box-ticking exercise. Instead, Uncharted 2 was a delight. I wouldn’t trade those fifty hours of Nier for any other game. It took several months of playing Spelunky to understand what made it so great.

I feel like I’ve finally escaped the hype cycle. It’s not that I no longer get excited for new games, just that my expectations are tempered by the realisation that I don’t need to play The Last of Us right now. If it’s great, it’ll be great in a year or two. And if it’s no longer great, that’s just as interesting. I think this distancing is increasingly necessary for good criticism.

In the next few days, I’ve got an exciting article being published on a mainstream gaming site about a game that was released in 1996. Thoughts take time to formulate, especially when they’re about our new favourite games. That’s why little of merit is written during a game’s launch week. Critics should to strive to free themselves from the expensive shackles of chasing the gaming zeitgeist. There are so many stories yet to be told about games that we overlooked and under-examined.

So I have decided… to continue the exercise. I’ve already talked about not buying an Xbox One or PS4, albeit for slightly different reasons. I still have so many games left to play, and I’m so excited about being able to play them and write about them, that it just doesn’t make sense to buy more. Perhaps the real question is, as you stare at that ever-increasing pile of games in your Steam library or next to the TV… when will you join me?