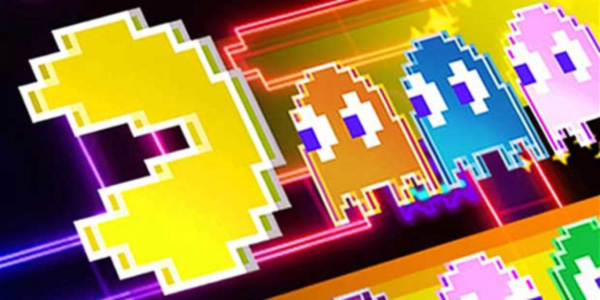 What would Pac-Man be like if it were made today? Players would be ushered through linear tunnels, the game occasionally pausing to throw dots into Pac-Man’s mouth during a cut scene. Toll booths would require you purchase DLC to warp around the maze. Sixteen player online munchfests with the whole Pac-Clan, while Keith Vaz tables an early day motion about how it’s turning the nation into a nation of drug-addled, ghost-worshipping fatties.

Regardless of my nightmarish visions of a modern Pac-Man remake, Namco have managed to bring old Paccers singing and eating into the modern era without losing any of his retro charm. This is roughly the fifth attempt at channeling the spirit of the Eighties: previously, Namco were content to charge a fiver for a tepid conversion running within an emulator. It was only when Pac-Man Championship Edition was released that gamers received the version they deserved; but despite the shiny new polish and surprising variation on a well-worn formula, it still felt like it was stuck in the past.

There are only so many dots you can eat and ghosts you can briefly debilitate before it all gets a bit stale. It’s a formula that has not changed much since 1985: that’s fine for a thirty second blast in the arcade, but not the stuff of which modern classics are made. I love retro games as much as the next geek, but there’s no denying that Space Invaders and Pac-Man have aged more like beer than wine.

If Pac-Man is a stale can of Sapporo, then Pac-Man Championship Edition DX is a double vodka and Red Bull served from a machine gun. Remember those ghosts that used to outsmart you somehow, even with their total lack of intelligence? They now line the maze walls in wait, chasing Pac-Man as he moves past. More and more ghosts join the chase, a multicoloured snake with a hundred mouths. Unlike other Pac-Man games, the labyrinthine layout emphasises building the ghost chain rather than mere dot eating. All the while, lights are pulsing and sound is pounding in an all-night Pac-Rave. Subtle spotlights draw your attention to a new piece of fruit and the stereo sound helps locate a lost Pac-Dude.

Power pills used to be a nice breather from the constant threat of death, but now they’ve become a real weapon: Pac-Face chomps through entire legions of ghosts in one move. Revel in the glory of the feast as ectoplasm smears around your merciless jaws and the numeric rewards spew forth from their corpses.

That’s it, really: eat and repeat. Become the ultimate janitor and clean out every cranny of the maze to fuel the feast ever onwards. It’s less about survival; more about scores. There are some ingenious concessions to modernity that give you the freedom to have fun: the game moves in slow motion when ghosts get too close, giving you time to plan an escape, while you are liberally awarded with bombs to clear the screen of all sentient life in a moment of panic. The better you get and the less reliant you become on the provided help, the faster the action gets and the higher the score you can rack up.

This game doesn’t care how good you are. That’s great, because I don’t care how good I am either. Achievements, in stark contrast to many Xbox games, are practically given away. You’ll run out of time long before you run out of Pac-Men, and you’ll never run of patience.

It’s not here to dishearten: it’s here to empower the player to devour phantoms and snatch a few more points with the jaws of victory. In a game landscape filled with legendary aliens, extreme challenges and dark souls eager to punish your every mistake, Pac-Man Championship Edition DX is a liberating joyride.