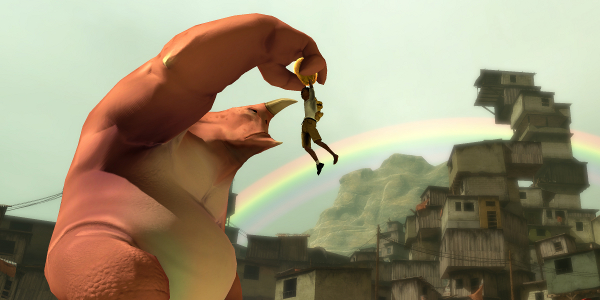 The only reason I’m writing this is because I’ve drank too much whisky and don’t want to go to Tiger Tiger.

In times like this (read as: anytime Tiger Tiger enters the night’s plan) my mind drifts to videogames. Which is still something that surprises/comforts/disgusts me with the same surprise/comfort/disgust as a lapsed alcoholic reading a wine list.

Papa & Yo. I haven’t played it but I’d like to talk about it. So I read some reviews.

From what they tell me it’s about a child and his monster friend in a parable that is actually about the lead designer’s troubled childhood dominated by his father’s alcoholism.

So I did what all tipsy nerds do: I loaded up Twitter on my phone and asked about Papa & Yo. However knowing my Twitter audience’s quiet disposition (which I choose to read as solemn respect) I played out both sides of my argument. I won, surprisingly.

It’s not art when you have to explain it. It’s not poetry when it comes with a breakdown of the structure. It’s not a cinematic masterpiece when viewed first time with director’s commentary.

Why then does Papa & Yo present the interpretation before the imagination? Is it an honest fact that the audience most likely to encounter the game might not be open enough to even register the symbolism at play? (I’ve worded that last line so to not call “mainstream gamers” idiots because I think anyone who identifies as a gamer is a moron also.)

Now the reference to alcohol which inspired this ramble is relevant for this reason: tipsy-coming-on-sober Craig is unsure of whether or not Papa & Yo includes such an explanation upfront. This might be like that ghost story I told Alan about the guys in the tent- a story peppered with realistic dressings retold so many times it becomes ingrained as truth in my mind.

I implore anyone who has played Papa & Yo to post in the comments below: Thoughts, links to your own writings or calls of derision. Whatever you want. I’d like to talk about Papa & Yo– and eventually I will play it- but I need convinced that there is depth below the surface symbolism.

Art in my mind is conveying an idea or emotion in a particular form that triumphs over the other myriad ways of explaining the point. It nails it in a way no other form even gets close to.

Please leave your comments below. And even if/when you don’t I won’t mind. I can clearly discuss such things in my head with a glass of the good stuff.