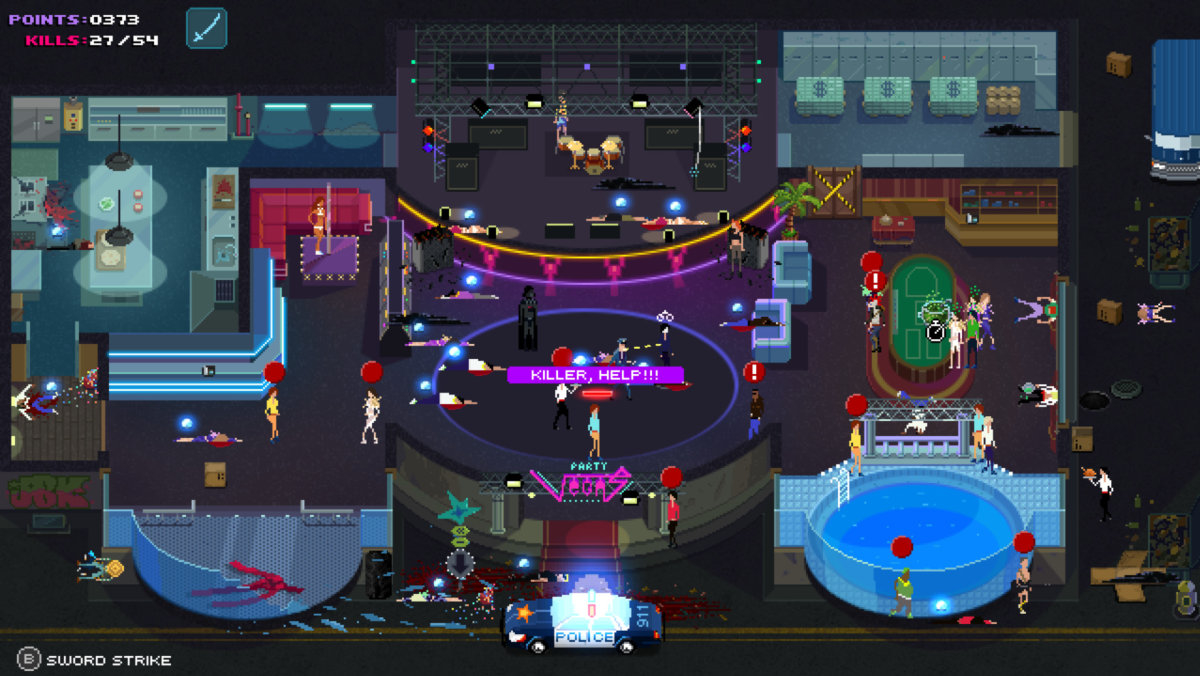 A typical level in Party Hard lasts anywhere between 5 and 25 minutes. A typical level’s music lasts anywhere 1 and 2 minutes. That’s a lot of repetition of what is an already repetitive soundtrack. The songs lack progression, alternating between an A section and B section, back and forth from beginning to end and back again. Their opening bars echo some of the absolutely belters on the Hotline Miami soundtrack but they are just far too short. Like trying to entertain a house party by only playing 30 second iTunes samples, Party Hard fails to settle into a consistent groove.

The premise of game is hip and tasteless. You play the grumpy neighbour who snaps at the nearby parties keeping him awake at night with their gosh-darn dance music. You grab a knife and hit the dance floor quick-stabbing and setting traps to murder every single party-goer avoiding the bouncers and cops. Beneath the pixelated blood and cartoon violence is a simple single-screen stealth-puzzler.

While I did have fun playing Party Hard I’d struggle to recommend it to anyone. It irks me that I somehow clocked up eight hours playing something so monotonous and – I’ll say it again because it’s thematically relevant – so, so repetitive. The variety in levels is painfully slim. I eye-rolled my way through the main story campaign with its unforgivably bad voice acting of a god awful script.

While the game is never out to get you, the rudimentary movement and enemy detection systems are troublesome. At their worst, they feel random and unpredictable. Most of the time they failed to stimulate leaving me watching the partygoers bump around until eventually I had an opportunity to strike. If I failed to capitalise and was spotted I rarely escaped the police. I was locked up and the level, and song, restart.

They sullied the good name of Partying Hard. I don’t know what else to say. Did I mention it quickly gets boring and repetitive?