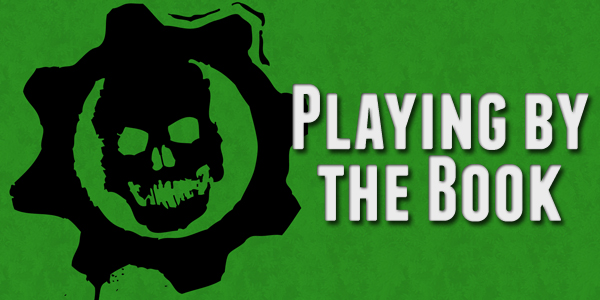 If game novelizations have lacked one thing (and that’s a big ‘if’: I’ve never read one), it’s authenticity. They’re nothing like the games that spawned them! Allow us to present to you a collection of more realistic game novels. Marcus Fenix crouched behind a waist-high wall and peered over into the battle. He struggled to distinguish one shade of brown from another through the gunsmoke. How long had he been here, fighting endless waves of the Locust Horde that spilled out of the earth like malevolent vomit? They all looked the same to him. Maybe it was his anthropocentrism, or maybe they really were identical. All he knew was that they all looked better with bullet-riddled faces.

He vaulted over the wall, firing his Lancer assault rifle from the hip. Round after round slammed into the chest of a Locust but it marched towards him unfazed, soaking up the bullets like a lump of particularly ugly dough. Marcus wrenched his finger from the trigger and revved up the chainsaw bayonet on the butt of his rifle. The Locust reciprocated and soon they were locked in a brutal embrace of jagged metal, like two ganting teenagers who had forgotten they were both wearing braces.

Marcus rapidly tapped the Lancer’s chainsaw button, and felt himself gain leverage over his foe. The faster he mashed the button, the more he felt power surge into his legs. After a tense struggle, he overpowered his foe and cut him clean through the middle, intestinal confetti spraying from the carcass. “BACK IN YOUR HOLE!”, yelled the victorious Marcus.

More Locust were streaming from another chasm in the earth. Marcus ran behind another waist-high wall littering the battlefield and lobbed a grenade into the void. It burst with a dull thud, sealing the fissure and sending enemy limbs flying through the air. Marcus searched for the words to serve as the exclamation point of the battle, but he couldn’t think of any new ones. “BACK IN YOUR HOLE!”, he cheered. George Washington surveyed his map. He had waged war with India over many years, and the years seemed to be getting longer with each new turn… of the Earth’s axis. His mechanised infantry had laid waste to the countryside of the Indian heartland, leading to the capture of Lahore. The fighting had been so severe that the conquered Indian citizens had been refusing to work for the past twenty years as an act of indignant rebellion. Washington was in dire need of workers to tend to sheep and mine uranium for his Giant Death Robot, in preparation for a final assault on Delhi.

Washington knew there was only one surefire way to qualm the workers’ dissent. He turned to his Secretary of State: “Mr Jefferson, we need to adopt Communism”. Jefferson picked up a large rolodex and thumbed through the pages on government civics. “I’m sorry Mr President,” he said, “But we can’t establish Communism at the same time as having Liberty”.

“Damn it!” roared Washington, pounding his fist into the war room desk. If only he had planned his civics more carefully! The sack of Delhi would have to proceed regardless, but their fortifications were strong and their warriors had been entrenched for many years, so their defences were surely high.

Washington’s tanks advanced on Delhi. An Indian warrior in loincloth stood on the ramparts, brandishing a stone club and waving it in defiance. He watched patiently as the tank shells rattled the foundations of the city, before hurling his club at them. It lodged in the barrel of a tank moments before it fired, obliterating it.

Washington grimaced and returned to his map. What had seemed like a mathematically assured victory had turned into a farcical stalemate of endless attrition. On his intercom, a voicemail message from the Indian envoy pulsed mockingly. Unconcerned, he watched as New York completed its construction of the Brandenburg Gate, the pieces of his jigsaw falling into place.

Teenage Mutant Ninja Turtles: Turtles in Time: The Novel of the Game of the Film Leonardo fell to the ground after a vicious combination of attacks had almost finished him off, his last units of life slowing ebbing away. As he fell, his elbow collided with a cold pizza slice lying in a puddle of fetid sewer water. A circle of pepperoni broke free from its mozzarella prison and rolled into his mouth. He leapt to his feet, revitalised. “COWABUNGA!”

He tore through the foot soldiers, stabbing repetitively, like a lawnmower with a pebble caught in the blades. “A A A AAAA!”, he shouted. He paused and wiped the shards of shredded robot from his katanas, but before he had time to polish off the rancid pizza, more enemies were miraculously catapulting out of the inch-high water into the sewer canal below.

There was no way Leonardo could escape the impending doom: his nemeses Rocksteady and Bebop, who he could distinctly remember individually defeating mere minutes ago, had returned more powerful than ever and in a curious shade of mauve. All of a sudden, there was a bright flash of light that knocked the advancing enemies to their feet. Leonardo smiled as his brother Donatello emerged from the light, joining him by his side.

“Don! How did you get here!”, exclaimed Leonardo.

“Last thing I knew I was at home watching TV, but it’s best not to question such things,” replied his brother as he readied his bo staff and they prepared to enter the fray… It was the men’s final at Wimbledon and Billy ‘the Bat’ Block was eliminating all distractions. He couldn’t hear the roar of the crowd, couldn’t see the umpire’s gestures. His unyielding focus made everything appear to him as lines of pure black and white, punctuated by the faint ‘bloop’ of ball connecting with racket.

He returned volley after volley. What was his opponent’s name, anyway? It didn’t matter: all that mattered was that he was losing 7 to 8 and he needed to win this point to stay in the game. The ball was rapidly accelerating and he struggled to return the shots while keeping his nerve. Soon it would be impossible to keep up without guessing his opponent’s move: the game would move from a simple test of physical dexterity into mental superiority. This was made even more difficult since the only way to return the ball was by smashing into it with his face, which tended to impede thinking.

Billy watched in horror as the ball clipped the corner of his opponent’s racket. Or was it the opponent himself? It was philosophically troubling. The ball hurtled towards the edge of the court in the one angle of eight possibilities he had been dreading. Billy knew he could reach the ball in time, but that wasn’t the problem. There was an invisible barrier in his way that had been impeding his progress during the match, forcing the potentially endless rallies into brief bursts of of monochromatic fury. It was as if some sadistic god had engineered the laws of physics to conspire against him.

If Billy couldn’t break his opponent’s serve, it was Game Over. He closed his eyes and darted face-first towards the ball, praying the pixels were on his side this time…