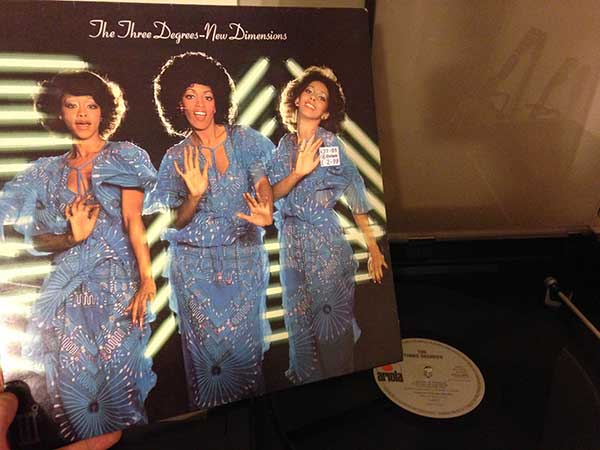 “New Dimensions” by The Three Degrees. I found this record in the Soul/Disco box in Oxfam Music in Stockbridge, Edinburgh. I’m not sure which genre I’m getting here; the three black vocalists could easily fall in either Soul or Disco camp (I’m hoping for Supremes-style flare either way).

The cover grabbed my attention but the reason I bought the record screamed out to me in neon pink:

Now my introduction to the man, like many I suppose, is from his recent collaboration with Daft Punk on Random Access Memories. His track basically tells his backstory so I’ll let him tell it:

While I didn’t know the man I knew the sound. I’ve always loved those relentless arpeggio synth bass lines, most famously from Donna Summer’s “I Feel Love”:

…which I found because of John Frusciante covering it during a Red Hot Chili Pepper’s concert:

This is how I sing in the shower incidentally.

Anyway back to Giorgio: turns out he’s got a new album out soon. His latest single “74 is the new 24” contains similar crisp guitar chops to those of Random Access Memories:

So yeah that’s a bonus find by picking up this random record.

Now let’s put the needle on the grooves and hope to God this is not shit disco.

Side One / Track One: Giving Up, Giving In

This is good disco!

Ooft. Funky bass synth and ascending vocal climbs. I’m all into this.

There’s a nice blend of synth and natural instrumentation going on this track: lots of bongos(?) and small drums/percussion but with some (good) cheesy synth drum fills.

The chorus is a bit messy, but after the killer verse I’m not surprised they don’t know where to go.

The second chorus elevates with the additional blippy synths panning left-to-right, though. So that’s a place to go…

The song could have used with a little more restraint in layers. The outro is the best example of when it works: stripped back to the fuzzy bass synth and then reintroduce the horns, strings, blippy synths and “Aaaahhhs”.

Don’t care though because the verse is the song.

Oh wait that wasn’t the outro. I think this outro is the heavy strings section.

////Oh wait I’m onto the next song and I’ve only just realised! Where did the first song end exactly?

Side One / Track Two: Falling in Love Again!

I really like the vocals. It’s everything I expected in terms of clarity and strength. Really solid tone that stands apart from the rest of the instrumentation.

The galloping tom drums in this song really give it some pace. It’s tearing along to really string-heavy movements.

There’s a fairly Brian May/Queen-esque guitar solo in the bridge in terms of legato (bended) notes and major/minor third harmonies- and I love how it’s all layered against a buzzy sawtooth synth.

There’s so much going on in this song too, especially come the second/third chorus. It’s like they wanted everyone in the band to have a section to show off. It’s intense and the vocals are the fire at the centre of this song.

Side One / Track Three: Looking for Love

Ok, so this record is produced fucking wonderfully. The tracks effortlessly blend into each other. I need to go back and try figure out how the songs are changing keys (using common chords as stepping stones?). This isn’t something I can do by ear so I’ll have to find the notes by playing guitar and try to follow the basslines next time I play it. Which might be immediately after I finish writing.

Anyway this song is my favourite so far. There’s a cool play between a harpsichord-style synth and [Editor’s note: I didn’t finish this sentence. Something. It plays between harpsichord and something.]

The verses have a more solid vocal line that the other tracks which at times feel like guest appearances. Here the vocals are the rail tracks that carry and propel the rest of the song forward.

Wow – the bridge is nice and loose compared to how tight the rest of the songs are. They’re just repeating the same four bars and layering in more instruments. But it’s all about those long-ringing notes from the fuzz bass (I think there’s some EQ tweaking over the notes too to make them swell and wash away like that). Really makes me want to smash out heavy bass notes on my guitar with the big distortion/octave shift settings and let the notes ring out and piss off the neighbours (again).

Right that’s the needle stopped on Side One. Damn that was good. I really wasn’t expecting the tracks to transition into each other so seamlessly.

I’m wondering now if the transitions from one song to another is a disco staple/trope. It would make sense in terms of playing a full record in a discotheque rather than playing single tracks and bouncing between records.

Incidentally, this is an important rule of these Random Record Reviews: no research before/during listening to the record. Fresh ears and ignorant mind only, please. Maybe I’ll check Wikipedia after, maybe I won’t.

Side Two / Track One – The Runner

Right I’ve taken a minute to write in the names of the tracks on Side Two. Pay attention, Wilson…

Slightly more minor flavour in the intro to this track with the descending stabbing synth treble line.

Ooft, uplifting major chorus. Damn I should really try to do more of this counter play in my own nonsense. Pull and release.

Haha! Just noticed the plastic cowbell getting bashed to shit in the chorus. It’s so hard to mix cowbells in a song with any subtlety. It often feels like a placeholder for another instrument they forgot to record.

Oh and now it’s cowbelling through the verse. Oh wait it’s not plastic I don’t think. They’re muting it by holding the bell because they gradually released their grip and it rang out more in the final bars of the verse. That’s professional level cowbell on display here.

This song is fantastic though.

Ok I’m guessing this is now track two. Brass section is leading the charge on this one over an unshifting single-note synth bassline.

Now they’re stepping down in chords and oohs beneath the synth bass. There’s a name for this when the bass remains static (either on single note or in a riff) and the other instruments provide the movement… I also learned this from an Red Hot Chili Pepper’s video. I’ll link here if I find it.

That lovely thing has happened where on the first listen to a song I’ve lost track of time. Yup fading out of track one now…

Side Two / Track Two (for real this time) – Woman In Love


Urgh, not a fan of that drum intro. This is a slower jam. Haha- why am I surprised by the gliding bell slide into the verse? Classic smooth lounge soul.

I’m not really feeling this song. It’s sparser than the previous tracks and is much, much slower. I wonder if this is what the Three Degrees sounded like before working with Giorgio?

Also the lyrics are a bit slush bullshit. It’s all about a Woman in Love needing only one man and how she basically seems to exist to love and “give you all that I have”. I prefer the image of Three Degrees of Non-stop Bloody Action.

Yuk. Sappy saxophone solo. This Four killer songs out of five is damn impressive though.

Another faded out song. Couldn’t have happened sooner.

Side Two / Track Three – Magic in the Air

Really soul-heavy vibes in this intro. Chirpy, wah-laden guitar and bass stabs while a keyboard layers out the chord progression.

I found this record in the Disco/Soul section – it perfectly describes the split between side’s one and two.

Ah the harmony vocals in the chorus win this track for me. Again a slower end to the record than how it started. Nice contrast in a sense- too much energy can be tiring and cheapen the tricks/tracks that came before. Diminishing returns is what they’ve avoided.

There’s no synth in this song strangely enough. The orchestration and balance between the instruments is so noticably more interesting than in “Woman in Love”. There’s always a melody in the spotlight: when the vocals conclude a guitar line or string section steps in and shows off a little then steps aside for the vocals to return.

Really nice song. Positively chilled out compared to side one but still captures the same stylish flare.

Again fading out the song. I suppose that was a limitation of how much music you could fit on a vinyl. Not unlike today when you can record and play a 24-hour song.

Reading the credits for each track explains how I felt about the record:

Side One / Track One: Giving Up, Giving In – Giorgio Moroder / Pete Bellotte

Side Two / Track One – The Runner – Shiella Ferguson / Giorgio Moroder

I’m a fan of the Giorgio / Pete partnership! Wikipedia tells me Pete Bellotte was Giorgio’s main production partner and worked on the Donna Summer’s songs too. Makes sense.

Shiella Ferguson is one of the Three Degrees. Makes sense.

I can’t seem to find anything on D. Bugatti / F. Muskar to explain why there song sucked. Makes sense.

The first three tracks which transitioned so beautifully into the next on the record tell a continous story now I read the track titles. Makes sense.

I really like this record. I might be a fan of disco. As I discover more disco I will probably refine that sentiment into “I’m a fan of good disco”.

Regardless, I’m a fan of Giorgio Moroder for sure.