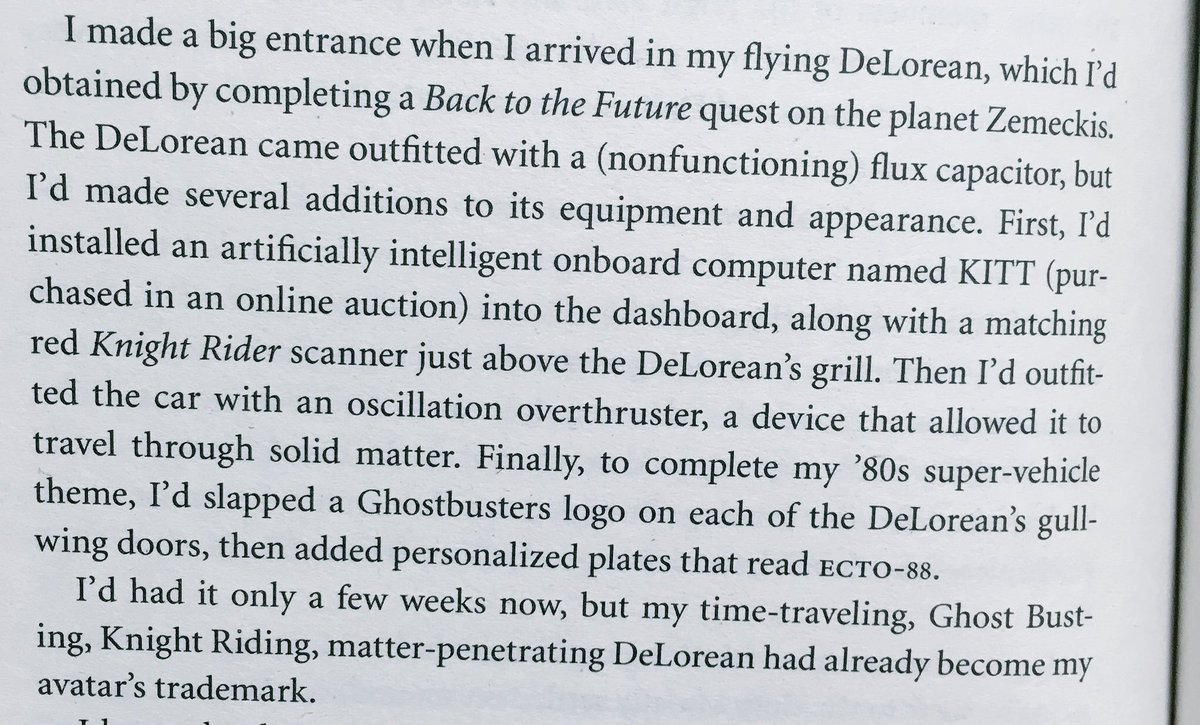 All Pop, No Culture.

I read this book in one sitting 🤓. That sitting was in Business Class on a long haul flight from London Heathrow to Grand Cayman to start my honeymoon 🛫🏝. I was in a good place in many ways 😝. Having chosen not to watch the Spielberg film adaptation of Ready Player One I was all primed to enjoy some pulpy video game literature 🕹👾📖.

I’m writing this review out now on the return flight after ten wonderful days of coral reef snorkelling and celebrating with my wife by eating all of the fish ‍🐟🏊‍♂️. Again I’m flying business class 😝.

If you think I’m insufferable for constantly dropping in references to business class and peppering in nuggetary emojis then you now know how I felt about the banal narration, one-dimensional characters and inane pop culture references strewn across the pages of Ready Player One.

Put simply, Ernest Cline is an utterly mediocre writer. Now I wasn’t expecting to be taken on a Cormac McCarthy journey of poetic prose and mind-expanding concepts – as was the case later on my honeymoon when I read Chixin Lui’s stunning Three Body Problem – but Ready Player One is truly bland. The plot plods along to the never ceasing drip of 1980s pop culture references.

A quick synopsis copy/pasted from Wikipedia:

In the 2040s, the world has been gripped by an energy crisis from the depletion of fossil fuels and the consequences of global warming and overpopulation, causing widespread social problems and economic stagnation. To escape the decline their world is facing, people turn to the OASIS, a virtual reality simulator accessible by players using visors and haptic technology such as gloves. It functions both as an MMORPG and as a virtual society, with its currency being the most stable in the real world.

It was created by James Halliday who, when he died, had announced in his will to the public that he had left an Easter egg inside OASIS, and the first person to find it would inherit his entire fortune and the corporation.

The story follows the adventures of Wade Watts, starting about five years after the announcement, when he discovers one of the three keys pointing to the treasure.

Ready Player One. (n.d.). In Wikipedia. Retrieved 06 June 2018, from https://en.wikipedia.org/wiki/Ready_Player_One

I have no qualms copy/pasting from Wikipedia because at times it feels as though Ernest Cline wrote whole paragraphs of the novel in this manner:

Dagorath was a word in Sindarin, the Elvish language J. R. R. Tolkien had created for The Lord of the Rings. The word dagorath meant “battle,” but Tolkien had spelled the word with just one “g,” not two. “Daggorath” (with two “g” s) could refer only to one thing: an incredibly obscure computer game called Dungeons of Daggorath released in 1982. The game had been made for just one platform, the TRS-80 Color Computer.

Halliday had written in Anorak’s Almanac that Dungeons of Daggorath was the game that made him decide he wanted to become a videogame designer.

There were a hand full of times when Cline managed to turn a phrase. When describing the budding romance between the Wade and Art3mis (one of maybe two female characters with dialogue) he writes:

Even when our avatars were doing other things, we were sending emails and instant messages to each other. A river of words flowed between us.

Almost sweet, right? Except this romance subplot is doomed by the fact Wade is a total creep.

It probably goes without saying that I had a massive cyber-crush on Art3mis. She occasionally posted screenshots of her raven-haired avatar, and I sometimes (always) saved them to a folder on my hard drive.

There was no telling what she really looked like. She could be fifteen or fifty. A lot of gunters even questioned whether she was really female, but I wasn’t one of them. Probably because I couldn’t bear the idea that the girl with whom I was virtually smitten might actually be some middle-aged dude named Chuck, with back hair and male-pattern baldness.

Ah good, a wee bit of homophobia survives into the fictional apocalypse of the 2040s where amid the energy crisis there remains a fear in some men of other men loving other men. This book was written in 2011 which is even worse. There are really cringey scenes of male adolescent ‘banter’ and then Cline ticks the box of transphobia to complete his quest to write the an incipid male adolescent teen fantasy of the worst kind:

While the potential perils of relationships starting entirely online has been covered extensively (see any of the 107+ episode’s of MTV’s Catfish) the science fiction of fully realised virtual avatars could have been an opportunity to promote progressive relationships, possibly even those that eschew the physical form completely. But alas poor Wade continues to worry about Art3mis real appearance throughout the novel. It comes as great relief to Wade, and no surprise to me, when he hacks into a database and finds real surveillance photos of her and she looks just like her attractive avatar. Winner winner chicken dinner!

The novel is weirdly out of touch in a number of other ways. The language used by the characters is locked in the  90s/early 2000s with plenty of out-dated lingo: “pwned“, “noob“, “eBay” or the “highly exclusive data-auction site known as the L33t Hax0rz Warezhaus“. With each of these utterances Cline loses the geek credibility he so loves. A simple term like ‘black market’ or ‘Cambridge Analytica’ would have sufficed.

I’ve been thinking about why I took such a disliking to the book’s pop culture references. It’s not the subject matter of videogames or films which I obviously love. Wade must overcome a series of large challenges in his quest and within these quests are Ready Player One’s strongest tie-ins. A whole planet themed about Zork? Awesome – I started playing through some of Zork on my iPad after finishing the book. When it’s just Wade exploring these main Easter Egg challenges the nerdy wish fulfilment has a fun, if admittedly ham-fisted, charm to it. There’s a particularly effective surprise planted in the completion of a Pac Man kill screen that had a nice pay off later in the novel. I mention it now to allow me to share the greatest scene from the greatest videogame documentary King of Kong.

As for the rest of the pop culture references, they are inconsequential and could replaced with no impact whatsoever. They are like those pop vinyl statues – you have a favourite but it’s just a different splash of paint atop equivalent chunks of plastic.

In the middle of all the dancers, a large clear bubble was suspended in space, at the absolute center of the club. This was the “booth” where the DJ stood, surrounded by turntables, mixers, decks, and dials. At the center of all that gear was the opening DJ, R2-D2, hard at work, using his various robotic arms to work the turntables. I recognized the tune he was playing: the ’88 remix of New Order’s “Blue Monday,” with a lot of Star Wars droid sound samples mixed in. As I made my way to the nearest bar, the avatars I passed all stopped to stare and point in my direction. I didn’t pay them much notice, because I was busy scanning the club for Art3mis. When I reached the bar, I ordered a Pan-Galactic Gargle Blaster from the female Klingon bartender and downed half of it. Then I grinned as R2 cued up another classic ’80s tune. “‘ Union of the Snake,’” I recited, mostly out of habit. “Duran Duran. Nineteen eighty-three.”

Any character from any game/film/political party could be the DJ. It could be Margaret Thatcher dropping mad beats for all it matters.

The chronic name-checking of pop culture serves no purpose and is distracting. Easter eggs in videogames or movies are typically hidden slightly to the side of the audience’s gaze and sought out after the initial viewing. The book constantly forces the reader’s attention onto the references by pointing and yelling “Look! This thing is like this other thing! This thing is from a movie! I’ve seen things!”. There is no hunt when the eggs are thrust into your face.

So there is a chance that the film adaptation may be more enjoyable because of this- assuming they also drop all the awful prejudice from the romance sub-plot. I recommend you skip the book and take a chance with the film adaptation. Go see the film I haven’t seen, I guess.