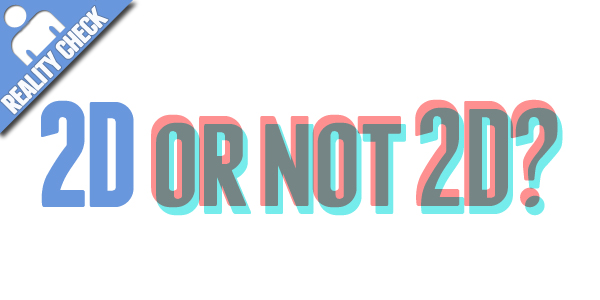 It seems like every week I’m complaining about how rubbish 3D cinema is; so, after a silly article was published in the Guardian today, enough was enough! The time has come to present my opinion. Two-dimensionally.

3D films break immersion. You are continually reminded you are watching a film. Breaking the fourth wall is fine: Ferris Bueller had his cheeky asides to the camera, while a bit of terrible CG can add comic relief to an aged action film that takes itself too seriously. But for the sake of argument, let’s assume we usually want to be engrossed by the film. I watched Contagion last week, which would not have improved with 3D flu particles flying towards my face every time someone coughed. Likewise, seeing Tyrannosaur in 3D would have made it less absorbing. You want to feel like you’re part of the action or drama: without that connection, films often feel hollow to me.

Films with a 3D version are better in 2D: Pixar’s Up and Toy Story 3 are obvious mentions, and I certainly have no desire to see my childhood favourite The Lion King in eye-popping 3D. The clever tricks of depth perspective that 2D cinema has perfected over the past hundred years make films more engaging, because our imagination fills in the blanks. My imagination is much better at this than a pair of glasses and an optical illusion. The action scenes in the new Tintin movie were like watching someone playing bloody Sonic, so egregious were the perspective shifts and changing camera angles. Tintin stands out among the aforementioned movies as it feels like it has been made for watching in 3D. Ironically, this makes the film one-dimensional. It diminishes the characterisation and plot in favour of spectacle, turning a beloved comic book into this year’s Transformers. Was there a Transformers film this year? I don’t know and I don’t care.

At the cinema, 3D films are more expensive for no good reason. I see enough 3D in real life without paying a premium for it at the cinema. It’s insulting enough having your wallet assaulted for a bag of stale popcorn and a flat, watery Coke without having to pay a 3D tax for new projectors. Imagine if Tesco raised their prices because they’d put new tills in, or if your bank charged a monthly fee because they had created a new online service. Thankfully, the shameful practice of cinemas charging for 3D glasses and then mandatorily collecting them for ‘recycling’ has ended. The reason cinemas are pushing 3D films isn’t for their enhanced entertainment: it’s because they are more profitable.

At home, 3D cinema is expensive for several bad reasons, and the number of reasons increases for every person watching. 3DTVs don’t use passive glasses like at the cinema: they use active shutter glasses that cost £70 a pair. If you’re lucky, you get one pair included with the TV. Want to have more than one friend round for movie night? Fuck you! Remember when we were all being pushed to buy HDTVs? The picture quality is great when the circumstances are right, but I’d wager most people are still watching muddy upscaled standard definition content on them. I think there are about six HD channels on my TV, but perhaps the real point is that they are buried within the normal Freeview channels and not yet a standard. People buy 3DTVs because they are also really good HDTVs, not for the 3D functionality.

Let’s go back to those glasses, because I already wear a pair of glasses and look (even more) like a moron when wearing them. They’re uncomfortable. They reduce the intensity of light entering the eye, so films look dull and washed out. I feel like I should be welding railway tracks, not watching a film. They are awful.

I love cinema and I love technology, and the interplay between them is exciting. HDTV and multi channel surround sound have massively improved home cinema, yet we still haven’t matched the resolution of film or digital theatre projection. There are good ways to use 3D technology: the 3DS is one of them, and even that is only starting to hit its stride with Super Mario 3D Land. But, like people who play music on the bus through phone speakers, just because we have the technology to do something doesn’t mean we should.

Every week (give or take) in Reality Check, we tackle the most interesting technology and gadget issues in the usual opinionated, irreverent Split Screen style. You can read past articles here.