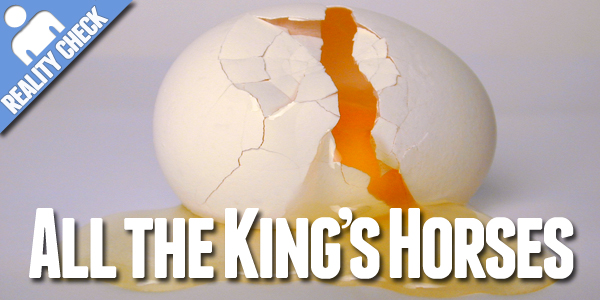 Reality Check: All the King’s Horses I remember a feature Craig wrote before we started Split Screen, “A Googol of Google Goodness”, about the merits of Gmail, Google Calendar and Google Docs. This was a couple of years ago, back when Android phones ripped off the Blackberry and not the iPhone. You couldn’t write an article like that nowadays unless you were working for Google’s PR department, who are so clueless it reminds me of Jamie McDonald’s classic line from In The Loop.

Google’s motto is well-known: “Don’t be evil”. Yet their actions haven’t matched this for a long time. Most recently, they’ve heavily integrated the rancid Google+ social ‘network’ into their core search product. It’s called Search Plus Your World, or as I like to call it, Spy World. Spy World promotes Google+ results at the expense of other social networking sites like Twitter and Facebook. If I have fifty followers on Google+ and two hundred on Twitter, my G+ page will weigh more heavily in Google’s rankings. Naturally, Twitter weren’t too pleased about this. Facebook doesn’t allow Google access to trawl its pages with search robots and so the results were incomplete anyway, but as Google tracks your browsing history with Chrome they do still have some Facebook information.

On the face of it, this is a fairly obvious move for Google, leveraging the success of one product to promote another. However, Spy World marks a real change of direction for Google. Their search engine has always been the best, because it’s the most relevant: it delivers better results than Bing, and you can find anything you want easily. Google Search is a fantastic product. It deserves to be number one. Spy World changes this: it’s no longer the most accurate and fastest search engine, merely the best search engine for Google’s business interests at the expense of accuracy and utility. To suggest anything else is to insult the user’s intelligence.

A more literal Spy World, to push this joke to breaking point, comes from Google’s updated privacy policy. Gizmodo have a great summary if you’d rather not wade neck-deep in legalese: in a nutshell, Google will now share your personal information across all of its products. So Googling ‘Xbox’ might bring up Xbox related videos in YouTube ads, or Xbox accessories and games in Google Shopping promotions. This seems a pretty sensible move to me: if we’re going to be bombarded with advertising, then the more relevant the better. Anything that moves adverts away from the realm of trickery and towards something useful for the end user has to be a good thing.

Yet, this is a lot of information for one company to hold about you. It’s no longer as simple as deleting your cookies and hoping for the best when your life history is tied to your Google profile. Besides trying to sell you more vaguely relevant things, it’s not a massive benefit to the end user. Worse still, Google’s recent exploits in Kenya would suggest that if you don’t agree to provide information, they might just take it anyway.

The search engine DuckDuckGo has been suggested as an alternative for those who are tired of Google: despite its terrible name (I would just call it ‘Go’) it has a clearly defined privacy policy and doesn’t track a user’s information. Among some blogs I read, there’s been a suggestion that in order to survive in big business, you have to compromise your values; DuckDuckGo can only be un-evil as long as it’s convenient to their bottom line.

I think that’s an unduly pessimistic attitude to take, and I hope it proves a false prediction. Of course, there are countless examples of big businesses being dicks: O2’s mistake of sending your telephone number, unencrypted, to every website you visited was a recent one. Yet the mistake was not that your number was being sent out, only that it was being sent to everywhere instead of ‘selected partners’. Marketing calls and texts are even more annoying when you’ve never given your details, like when Tiscali supplied my unused university flat phone number to telemarketers. I can’t remember why I stopped using their services.

Google’s business model, like Facebook and Twitter, hinges on your personal information. You are not the customer: you are the product. Their customers are the companies who stand to benefit from Google and Facebook’s targeted advertising, hence obnoxious marketing promotions to ‘like’ products and ‘check in’ to the local shopping centre. Facebook didn’t develop Timeline to ‘tell the story of your life’; they made it to harvest your history and algorithmically determine which crap goods and services to show you next. Google developed Android to dominate mobile search in the same way they dominated desktop search, ensuring people continue to use their services rather than those from Microsoft.

That’s why Google should be worried that the only successful Android tablet is Amazon’s Kindle Fire, which runs a forked version of Android that gives Google nothing in return. That is the real consequence of the oft-maligned fragmentation of Android: not only will the platform’s progress be hindered by developers aiming for the lowest common denominator (unlike iOS developers, who can adopt the new features of iOS 4 and 5 rapidly without neglecting their target audience) but you’ll have multiple Android ecosystems like the Amazon App Store and Google Market, “two continents of experience and feeling, unable to communicate”.

There is a bigger fragmentation issue at Google than the one surrounding Android. It’s a divide between a company that outwardly acts philanthropic, while gradually chips away at things it claims to protect. It proclaims its support for open standards like HTML5, then bundles Adobe Flash with its web browser and develops Native Client (NaCl) to lock people into using Chrome like a reborn ActiveX. It replaces existing languages and protocols with its own proprietary code, like Javascript with Dart, developed in a closed environment with no external input from software developers. It scans the world’s books without consulting the authors of said books, then tells them this wouldn’t work as an opt-in service.

It doesn’t fit their ultimate agenda: reducing the value of the world’s intellectual property to zero. You can’t sell an operating system, a book, work tools or fonts if Google are giving them away, so the only way to monetize them is through advertising; and of course, Google are the dominant force in online advertising.

That’s a clever business model, but is this what “Don’t Be Evil” looks like? The cracks aren’t just beginning to show: Humpty Dumpty has fallen from the wall, egg leaking out of his shattered exoskeleton onto Google’s face.