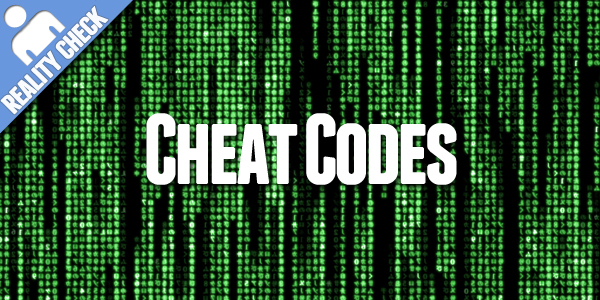 Cheat codes of old were cryptic enscriptions with apparent magic properties, enshrined in sacred scrolls of wisdom (games magazines). These were typically used by programmers and testers debugging an unfinished game, and of course unskilled children like myself.

Most gamers from the Eighties will be aware of the famous Konami Code, which gave people enough lives to barely finish the first stage of Contra, while as a child of the Nineties I still remember the Sonic the Hedgehog level select code (Up, Down, Left, Right, A + Start). Level selects were amazing things, because you could teleport to places you couldn’t dream of reaching through skill alone. Often codes were self-referential or contained in-jokes: Aladdin‘s secret menu greeted the user with the line “Dave Perry, what is your wish?” in reference to its programmer.

Cheat cartridges like the Game Genie were quite popular in the 16-bit days: I had a Pro Action Replay, a device which slotted between my Mega Drive and the game. This scanned the game’s code as it was passed from cartridge to console and allowed you to edit the code: you could write to the memory location FFFE1 20009 and Sonic would always have nine lives, for example. Better yet, you could search the game for values and track changes across multiple game sessions to come up with new codes of your own.

Slowly, for one reason or another, cheat codes started to die out. They still existed, but they were often for comedy value than unleashing godlike powers of infinite strength or ammunition. PC games like Half-Life had command consoles where chests could be entered, but access became obfuscated when Half-Life 2 was released. As these consoles were used for changing settings on game servers, they were usurped both by graphical interfaces in the games and ‘dedicated servers’ which hosted games, but couldn’t play them.

By the Dreamcast/ PS2 era, gamers had to resort to their abilities to see everything the game had to offer. Part of this is due to the rise of online play and the potential for unfair exploits: although the Action Replay is gone, its legacy lives on in ‘trainers’ for popular online shooters and role-playing games. This led to a technological arms race, where programs like Punkbuster and Valve Anti-Cheat were developed to scan for trainers and stop cheaters ruining the fun. Yet even with more secure services like Xbox Live, hacking and cheating are still prevalent.

Cheat codes have been replaced with a different kind of code, though. If you’ve bought any EA game in the past year, you’ll have seen one. If you’re pre-ordered a game from a particular outlet, you might have acquired them that way. I’m talking about one-time redeemable codes, the new and unfortunate way for game publishers to wring every last penny from the purse.

When you purchase a new copy of Battlefield 3 for the Xbox or PS3, it comes with an ‘Online Pass’- your license to play online. It’s no longer enough to buy a copy of the game to play it, you see: every possible avenue of revenue must be covered, players’ inconvenience be damned. Once you’ve typed in the serpentine 25-character Online Pass code, you’re free to go: except in the case of Battlefield 3, where you won’t find any game servers to play on unless you’ve redeemed the other code in the box for the Back to Karkand expansion pack (exclusive to the Limited Edition).

It reads like a satirical take on the games industry- a mandatory 2GB download of additional content that remains inert until you’ve paid another tenner- but this was my actual experience of playing Battlefield 3 online. I couldn’t extort a tenner from my brother so I could play his Christmas present to me online with him. I couldn’t scold him because he couldn’t find a copy of the Limited Edition for sale. Well, I guess I could, but that would make me a massive dickhead.

Imagine playing a Civilization game where you can’t progress beyond 1650 unless you’ve purchased a new copy of the game. I can’t wait to play Half-Life 3: “We don’t go to Ravenholm, at least not until you’ve typed the pre-order code into the terminal… Gordon”.

It doesn’t just happen with online games: new copies of Mass Effect 2 had ‘Cerberus Network’ codes to unlock further missions that were already on the disc. Worse still, Assassin’s Creed II had part of the game’s story missing unless players forked out for additional content at a later date: the two missing chapters are a mark of shame on an otherwise excellent game. Increasingly, it’s not even enough to seek out collectors’ editions of games if you want the extra goodies: individual retailers have their own pre-order bonuses like costumes and maps. Batman: Arkham City had a pre-order arrangement so elaborate and convoluted, it could serve as the plot for a third game.

Sure, pre-order bonuses are currently limited to non-essential skins and maps, but what’s to stop that from changing? Downloadable content has evolved into the ‘season pass’, where players can subscribe to additional content releases for Forza Motorsport 4 and Gears of War 3. Call of Duty Elite is a publisher’s dream, tacking yearly subscription costs onto an already highly-profitable franchise.

In the mid-Nineties ‘shareware’ games were prevalent, and great. You could play not just a demo, but the first quarter of Doom or Duke Nukem completely free! Nowadays, you can buy the full game at retail and still not own all of the content. Consumers can never benefit from having content taken away, and it won’t be always be irrelevant paint jobs: it will be levels, characters in RPGs, even entire story arcs depending on where you bought your game. It’s damaging for players and it’s damaging for developers who have the vision of their game compromised by profiteering.

The cheaters of yesterday used codes to compensate for their ineptitude; the truly malevolent later hacked into games to spoil others’ fun. The cheaters of today are publishers; not content to charge for games, but also to charge again for services already rendered. I don’t want to get into the pros and cons of pre-owned games: I try to buy new games when possible, but I still think of games as physical products that an owner should be entitled to resell. Rumours suggest that Microsoft will attempt to block pre-owned game sales for the next Xbox, further diluting the concept of software ‘ownership’ that Steam has so effectively undermined.

It’s hard for the modern gamer to be a cheater, but easy for them to feel cheated.

Every week in Reality Check, we tackle technology news in the usual opinionated, irreverent Split Screen style. You can read past articles here.