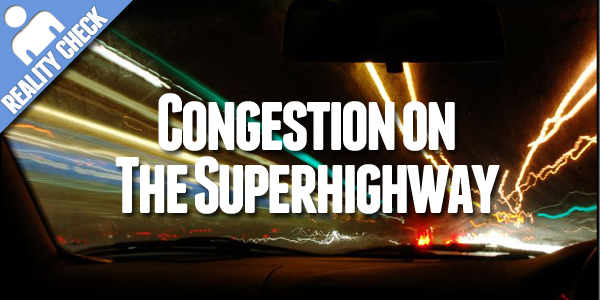 Reality Check: Congestion on the Superhighway Struggling with the traffic.

“The Information Superhighway”. Remember that? Limitless, free, up-to-date knowledge flowing along the Internet’s tubes: that was the promise made in the late 90s. This promise has been kept, more or less: from BBC News to Wikipedia, Twitter to Wikileaks, there’s never been more readily accessible free information. In fact, were such laws to pass there might be a decrease in free information: this week’s SOPA blackouts showed that the world is a lesser place without Wikipedia.

The thing about highways is that the more traffic you have, the more congested the network becomes. The amount of information is overwhelming: it’s impossible for any one person to absorb it all. I’m not just thinking about traditional sources like the BBC and newspapers, or even ‘neo-traditional’ websites and blogs. The rise of aggregators like Facebook, Twitter, Tumblr, Reddit, Digg and StumbleUpon has encouraged the sharing of articles, but also the recycling of said articles and the continued proliferation of yesterday’s news. Some of these content promotion services are destined to fail. The once-mighty Digg has fallen from grace, and why anyone would use the horrible Google+ by choice is beyond me. (Try creating a Google+ page more than one person can administrate. Try adding a news feed to Google+. Now do the same in Facebook in thirty seconds, and let us never speak of Google+ again.)

Content promoters rely on services like dlvr.it and HootSuite to reach as many social networking sites as possible. Speaking as someone who promotes their own site, it’s a deflating experience: endless promotion with often little payoff. What would it be like to actually get paid to do this kind of thing? I imagine you would feel like a cosmetics salesperson in a crowded shopping centre: waving the goods at everyone, outwardly enthusiastic, face constricted into a permanent grin by a combination of insincerity and the toxic nature of the products. Good articles- stimulating, well-written content- are naturally promoted through the social networks, without any need for ‘search engine optimisation’ or other odious marketing jargon.

I’ve tried to cope with the balance between reading all the information I want, without being saturated by it. I have too many RSS feeds (see the pictures for details): there’s an undesirable mix between original content and churnalism, with no way to discern between the two. We’ve previously covered churnalism in The Machine and the Industrial Action podcast, so I won’t continue lest we be accused of churnalism ourselves. Instapaper helps me save the best articles from RSS for reading at leisure, but I’m probably missing a lot of the good stuff as well. What we need is an cycle lane on the Information Superhighway, aimed at news writers and readers who don’t want their news polluted with garbage every day. A place where original content producers- Split Screen unashamedly fits into this category- can promote their work with getting lost among the me-too news pieces, technology previews and bland ‘analyst’ features written by avatars without personalities.

Big corporate combine harvesters will hate the idea of a cycle lane, because cyclists don’t drive along established toll roads and even disregard the law at times. It’s this nimbleness that allows them to cut through the traffic: blogs used to adhere to this philosophy, but increasingly they’ve become as bloated and incorporated as the media outlets they ousted. In an environment where everyone has immediate access to the same pool of knowledge, only the dynamic and innovative can flourish.

For RSS, I propose a simple traffic calming measure. Websites that mix news and views should provide two RSS feeds: one for originally sourced and produced articles, the other for the same regurgitated rubbish everyone else is pumping out. Wouldn’t that be great? Imagine being able to read a news feed without deleting ten articles about Apple selling more iPads (OK, maybe that’s just my RSS reader) or a new game being released. You could skip the parts of BBC News you’ve already heard and have the Magazine articles presented for dissemination. Ars Technica is one of my favourite technology sites, but it sometimes takes weeks before I find a great feature I missed first time around.