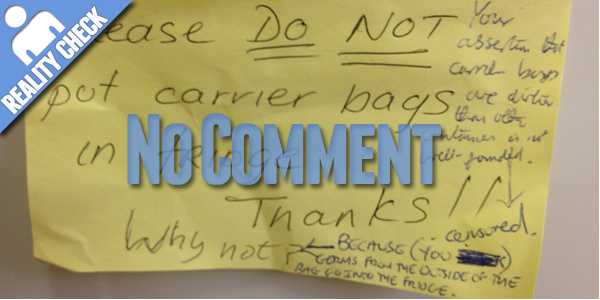 Yesterday I avoided an argument with JF Derry on Twitter, who posted a blog entry on how to take down fascists on YouTube by flagging their accounts for abuse.

It’s best if I post an image of our exchange here, lest I be accused of manipulation: As I joked in my tweet, “I never read the bottom half of the internet”. YouTube comments are blocked on my web browser, the Daily Mail website is out of bounds thanks to Kitten Block, and I have a rubber hand on my desk that slaps my face when I read comments on Engadget. If you need an example of ‘trolling’ for that dictionary you’re writing, or you’ve been away from Earth for a few months and want to see how the species has developed, look no further than a web article’s comments.

Commenting often does more harm than good. What factual nugget did you glean from YouTube’s comments lately? What great comment on a Guardian opinion piece changed your mind? There’s a reason why writing establishments have quality control: most people either have horrible opinions or are terrible at expressing pleasant ones. Unsurprisingly, our site statistics show a huge pageview to comment ratio. You have to be highly motivated to comment on an article, and you need to be even more highly motivated to comment positively. I explictly comment my appreciation of articles, while offering constructive criticism of others, and I wish more people did the same.

Matt Gemmell disabled comments on his blog this week, and his reasons for doing so are well-articulated and compelling: I’ll not list them here because I’d encourage you to read the whole article, but an important point is that disabling comments does not discourage discussion. As Gemmell points out, there are several good ways to discuss something you’ve read. You can write a response on your blog: it was somewhat beyond the limits of tweeting to respond to JF Derry, for example, so a blog post makes sense.

Gemmell acknowledges the key issue that most commenting on websites, including this one, is anonymous- unless you explicitly choose to unmask yourself. Anonymity breeds hostility by removing accountability. Split Screen uses Disqus, which maintains a profile between sites, but if you’re a troll or hater then it’s easy to skirt around that. Twitter creates a timeline of posts and shows your relationships with others; it’s somewhat more accountable than ‘pure’ anonymity. Blogs are better still, as they are often a highly personal thing. These don’t have to be anonymous, but your personal details are usually tied to your web hosting company. If it’s YouTube, you can post a video response, which creates a link with the original video: again, like a comment, but more accountable.

I’m not arguing for the abolition of anonymity: it’s important that the facility exists, especially where bloggers’ lives would be endangered. Yet it doesn’t have to exist everywhere. There shouldn’t be an assumption that anonymous commenting is allowed, or that it’s the only game in town.

JF Derry and I agree that we should be held accountable for what we publish online; that’s why racists can currently comment on YouTube with impunity. It’s interesting that Derry thinks reporting people for hate speech on YouTube is a productive use of anyone’s time. Storming in wearing our Voluntary Internet Police (VIP) uniforms will not stop hateful comments on YouTube, or anywhere else. It is an unstoppable tide. Accounts will never be banned faster than morons create them. If you had to stop a serial arsonist, you wouldn’t run around with a bucket of water putting out his fires: you’d take his matches away.

Instead, we should take away their right of reply: remove comments from YouTube entirely and tie website comments to a Twitter or Facebook account. Rather than burying my head in the sand, I’d close the sandpit so the bullies couldn’t play in it. Derry and friends would rather wade in, trowels in hand, to shovel up the shit.

Technology website TechCrunch abandoned Disqus for Facebook and the trolls’ bridges collapsed practically overnight. NUS have promoted No Platform as a strategy against hate speech from the mid-1990s and although it has been the subject of fierce discussion, it has allowed member unions who adopted the policy to block hate preachers from campus. The thing is that universities are a great place to debate and destroy racist rhetoric, but YouTube is not. I believe the only way to quell unpleasant philosophies like fascism, creationism and unfettered capitalism is through debate that scrutinises their ideals, not a terse 140 character response from behind an avatar.

We love your comments on Split Screen, whether you’re a friend telling an in-joke no one else will understand, or if you just want to tell our readers about your online shoe shop. However, if commenting ever became defamatory or hateful, we’d have no hesitation in turning it off. If you’ve written an article in response to anything you’ve read here, we would love to read it.