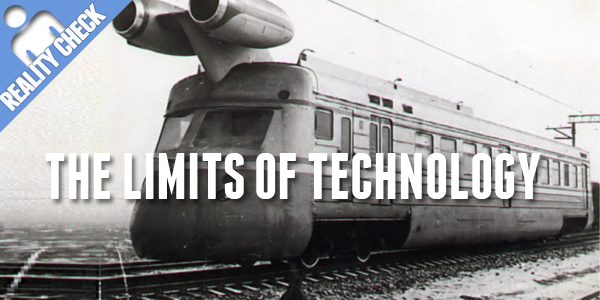 Reality Check: The Limits of Technology Here’s a shaggy dog story to brighten up your Christmas: yesterday I travelled from Oxford to Northern Ireland. This thrilling, two-stage odyssey required taking a train to Birmingham and then catching a flight: as you would imagine, recent advances in consumer technology have changed this journey significantly. What you might not appreciate is where companies are failing to change with it.

I purchased an e-ticket online for a Cross Country train and loaded it onto my iPad. Upon arriving at the train station I was (politely) informed that the ticket needed to be printed and the train operator wouldn’t accept a digital copy. Nevertheless I was allowed through the barriers and onto the train, where the forewarned scenario arose. With no means of printing a ticket, I was forced to buy another one- for which I’ll be claiming a refund.

To be fair to Cross Country, I’d like to make two things clear. The train manager was extremely courteous and explained he couldn’t accept the ticket for fraud protection reasons, and couldn’t scan an e-ticket unless it was printed. Secondly, it clearly stated on my ticket that I should have printed it out. But I take umbrage with the idea that an e-ticket stored as a PDF on a tablet is fundamentally different to that same ticket when printed. It is absolute bollocks that a train conductor can’t process an e-ticket that holds the exact same information as its printed equivalent, especially when I’ve got the credit card I bought it with on my person. If someone has stolen my credit card and bought a train ticket with it, printing the ticket is not going to stop them in their tracks. This is an infrastructural failure for which the responsible IT consultant should be ashamed, tarred and feathered.

What if I had a Kindle: could the ticket be scanned if it is displayed on e-ink? What if iPads become so sophisticated in five years that their screens become indistinguishable from paper? If you’ve printed your ticket but you were running low on ink and it won’t scan properly, do you have to buy another ticket? When is the member of staff allowed to use common sense? Maybe it would have been a good idea to develop an e-ticket that was slightly more robust and flexible. To my mind there are two good reasons for e-tickets: the first is environmental friendliness, negated by having to print out the ticket. The second is ‘convenience’, but how is this more convenient than collecting a ticket from the station, or just buying one on the train? The only convenience is to the train operator, who get your money that little bit faster.

Flybe have a very smooth check-in procedure where you can scan your passport and print your boarding passes immediately, much more convenient than printing ten pages of advertisements and half a page of ticket from your computer. When I boarded the flight, I heard the familiar announcement: “switch off all electronic devices during take off and ensure they are in flight safe mode”.

It’s obvious that a phone cellular radio can interfere with other equipment: we’ve all suffered the consequences of leaving a phone next to a speaker while it is roaming. But phones are not electromagnetic weapons: with the antenna off, it’s only going to disrupt the flight if you throw it at the pilot. We’re allowed to read books during take-off, but we have to ‘switch off’ our iPods and Kindles. Of course iPods don’t actually switch off completely, but let’s not let the facts get in the way of the scaremongering.

The limits of technology are the luddites who are unaccustomed to it: the belligerent executives and bureaucrats who are too ignorant to understand electronics, so they ban them and artificially limit them. How are we going to replace our wallets with phones if we can’t pay for goods on flights? Will we be allowed to turn them back on when their use can be monetized?

If I were in charge of a major transport company, my drive towards improving technology would be relentless: wi-fi everywhere, Angry Birds for everyone at take-off if your phone’s antenna is off, tickets with simple codes that can be typed into a terminal and delivered via SMS or email. This isn’t the future: this is technology from five years ago, and it’s time to go back to the future.

Craig: Phones actually remain an electromagnetic disruption even with the antenna turned off. As with iPods, Kindles and CD players: all electronic devices that pass current emit an electromagnetic field. Technically your brain does this as well, just not as strong as a Kindle. Sorry about that.

Flipping your streaming YouTube video on your iPhone to the side isn’t going to topple the aircraft in one-to-one correlation. Hanging up your phone call mid-flight won’t drop the plane into the Hudson River.

What everyone seems to misunderstand is that airplanes are monitoring their electronic systems, looking for tiny fluctuations that might indicate a larger, unknown fault. Most faults develop during critical moments such as take-off and landing: it’s safer to ask passengers to turn off their tiny, fluctuating electronic devices that might get in the way and confuse matters.

The passenger space will be shielded to some extent from the airplane systems but there are two problems I can see:

First, older planes will have poorer shielding from today’s electronic devices. Why? Well because, judging by the seat decor, these planes were built at least ten years ago when you had to worry about were bombs in shoes and not entire seasons of The Big Bang Theory in your pocket.

Second, technology advances and will continue to advance. Alan’s experience of the delayed acceptance of their own e-tickets is outrageous but when it comes to building machines that fly you can only future-proof so much.

Airlines are weird floating time bubbles anyway. They’ll continue to ask us to turn off your electronic systems as long as we live. They’re still showing us how to buckle a seatbelt.