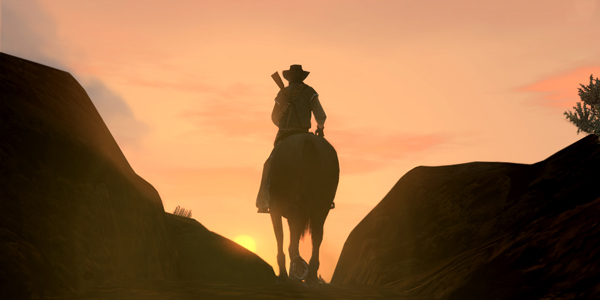 Love is a force of nature.

Back in the Old West, people walked for miles just to watch a movie. It was a rare and rewarding treat to see the rickety old projector spin up after a trying journey. In the towns of Red Dead Redemption there are little cinema booths where, for just $3, you can enjoy some low-quality cutted scenes. In some small sense such minor touches showcase Rockstar (looks at box) San Diego’s fine attention to detail.

In a more pressing sense, Red Dead Redemption killed off my remaining tolerance for video game cutscenes. In a game where I do little but walk my way between cutscenes, I wasn’t going to sit and watch my virtual self sit and watch more movies when I’d rather be outside playing cowboys. I am no longer a fan of the mo-capped word.

Whether Grand Theft Auto, L.A. Noire (Grand Theft Forties) or here (Grand Theft Horsey), the typical Rockstar narrative lives in the emotionally-charged cutscenes separate to the playable sections where you kill people for reasons justified in the cutscenes. They once again create a lush world to which your only connection, your only sense of touch, is through bullets and ragdolls and racing and checkpoints. A world this gorgeous deserves better. As I was skipping cutscenes my John Marston was like the protagonist of Memento: forever waking up to a fire fight with no idea of how he got there or how to get out. My problem was that detaching myself from the cutscenes exposed the rather limited range of missions:

Despite its dominant presence the actual gunplay remains pretty underwhelming. Enemies are all brainless fodder charging towards you, ducking behind explodable barrels and adopting the whack-a-mole position somewhere in the middle-to-near distance. Two shots and they’re dead regardless of gun or creed.

Let’s not reflect too long on how comments like that sound psychopathic. Aren’t video games odd?

Taken online to the multiplayer it’s a world of step-step-die-respawn-die, with the additional hindrance of an experience-based levelling system. I start a level 1 loser riding an ass with a measly pistol instead of the long-ranged scoped rifle that high level jerk who keeps killing me keeps on killing me with no matter where I respawn. So, the scale of enemies runs from uninspired AI to unregulated human vindictiveness. Somewhere in the middle there are honourable people enjoying themselves, I presume.

Forming a posse online with friends alleviated this, but the variations on shootouts got old quickly. The one time I wanted to play poker online (hustling over voice chat) we couldn’t without buying DLC. That’s no justice considering all the card games are in the singleplayer.

I’m being serious here. I did have a good time playing Red Dead Redemption: it just took place outside the traditional story missions. It’s all too clearly marked out by flashing yellow Xs where to climb, where to stand, what to shoot and where to walk into the cutscenes; there’s no sense of genuine surprise or discovery. Here’s the script, now follow it or else. Can hand holding be heavy handed? Admittedly, the emergent gameplay alternative generally involves becoming a serial killer on the run. Lassoing the unsuspected from their horses and dragging them into bear territory, hogtying as many patrons in the bar before the sepia fuzz arrive; you shouldn’t won’t need many clues to guess that most of my extracurricular activities involve John Marston with the Rope in Every Situation laughing like a fiend. Sure you could play cards, throw horseshoes or pick flowers; but it’s not proper fun like someone who wants to have a good time would want to have fun. It’s busy work for when the next mission is locked out until tomorrow morning. These periods are best spent saving the game repeatedly to literally pass the time.

The most promising and enjoyable moments in Red Dead were from the random encounters. These mini-missions emerge organically from the world’s background actors: many call upon your assistance directly, others are stumbled in the desert at their most vulnerable. In one terrific moment I came across a man on his knees held hostage by bandits. I ambled forward, pulled out my revolver and initiated the slow-motion Dead Eye wherein I would tag each bandit to cue up a rapid emptying of my revolver.

Unfortunately the bandits, still in slow motion, executed the man while I was still taking aim. I was the fastest shooter in the West who wasn’t fast enough and before I knew what had happened I was alone in the desert with a pile of mistakes. That moment will stay with me. The random encounters are short, but I didn’t mind. I had the choice of whether to hear out and accept their request or to ride onward. The lack of a forced camera change shouldn’t make a difference to me, but it does.

The writers get a lot right. Yes, the clunky dialogue is a mix of trite exposition and mechanical instructions, but there were many characters and stories I enjoyed. In particular the early acts with the rancher Bonnie McFarlane showed her as a strong female character, free from horrid stereotyping. Later on to my surprise I found tending the ranch and the brief exploration of Marston’s life with his family to be a refreshing change of pace.

My problem is with Red Dead‘s storytelling, not its story. I should say that while I’ve completed the main story I don’t know how it ended. I was chasing the big bad villain through a mine and he escaped up a ladder. I ran to the ladder and a cutscene started, so I skipped it. Next thing I know I was walking in the forest, the mission was over and an achievement unlocked.

So that’s how I killed him: I walked up to a ladder. I walked into a cutscene and he died, somehow. I know the feeling.