Every dog has his day.

Our life goals have been clear since we moved to Australia:

After two years of working, saving, wedding planning and volunteering with Greyhound Rescue in the fleeting free moments, our plans were realised. Sure, we didn’t plan for apocalyptic bushfires surrounding our new house – when I started writing this, my wife was out fighting them, and the only thing that put out the fires was a rainstorm that caused flash flooding – but all things considered, mission accomplished.

We adopted our son in November. He’s a rescue greyhound called Spyro (named for the dragon, not the US Vice President). He’s nearly a metre tall, a bit like having a pet horse without the appetite.

At first he was a real velcro dog. He followed us around the house, but when we stopped moving, he didn’t. He was nervous, pacing circuits around the dining table and sofa, panting and yawning when he sat down. I frantically skim-read Retired Racing Greyhounds for Dummies, first eager to learn, later desperate for help. Despite what Dummies led me to believe, dogs don’t come with a manual.

We’d heard that dogs went crazy for barbecue chicken. I risked losing all my vegan superpowers by stripping the meat off the carcass with my fingers. But he didn’t eat the chicken. He wouldn’t eat anything.

That first night, he cried when we went to bed and locked the doggy gate behind him. After a while he settled down, then started pacing and crying from 4am until I got out of bed. I fell asleep on the couch with the dog on his bed at my feet.

We tactically adopted Spyro when I had a week off between jobs, so we had a whole week to introduce him to home life. We have a verandah at the rear of the house, but he didn’t know how to use the stairs to get into the garden, so every few hours I led him from the front to the back of the house, gently coaxing him into peeing by walking him near trees and bushes. It didn’t work, but he was more than happy to pee against the barbecue or the staircase, of course. Then he would freeze at the front of the house and refuse to go in. At one stage I carried him inside, folding his legs up like a dog-shaped table.

Spyro became curious of the verandah, tentatively taking his first steps downstairs, but still noncommittal. On day four, in preparation for the usual working weeks to come, we started to leave him in the house by himself. Knowing he could now go upstairs with confidence, but not downstairs, I left him outside and went to the gym, barricading the verandah staircase with pallets and a folding table.

I met Jess at the gym. When we arrived home and I unlocked the front door, telling her about my excellent home-made barricade, Spyro suddenly appeared at the front door. He’d made short work of the barricade and jumped through a fly-screen window like a budget circus act. 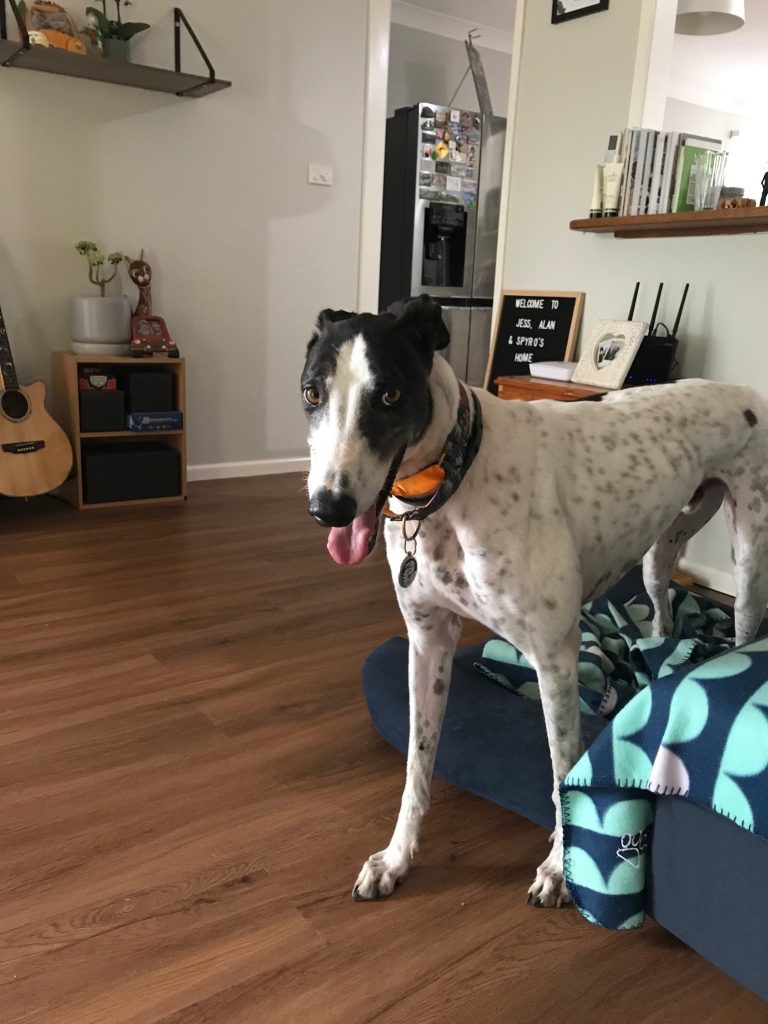 We reached a parenthood nadir that night. Spyro refused any treats we gave him: peanut butter, fruits and vegetables, even the barbecue chicken and kibble he was now comfortably eating at mealtimes. Without a way to reward him, we couldn’t provide the enrichment or training he needed. We scoured books and blogs, but nothing reflected our experience. We sat at the kitchen table, completely exhausted, the dog sitting at our feet looking sad. We wondered if we’d made a mistake. We were shit parents.

I went to leave the bins out for collection. My next-door neighbour was doing the same, and I lamented our parental struggles. “Wait here, I’ve got just the thing” he said, disappearing into his house, reappearing with a small plastic bag. “Try these liver treats. They’re like cocaine for dogs. Ours can’t resist them”.

I ran inside with my score. Spyro devoured the treats; his eyes demanded more. I drove to the nearest supermarket and bought a whole bucket of them. He ate some more. He ate the disgusting liver and rosemary cookies I bought. He ate cream cheese. He devoured sardines. He slept through the night without crying. It was a miracle.

The next day, I set to work on the verandah. I bought a roll of artificial turf and carpeted the staircase, rush-ordering a greyhound-sized doggy door by courier so he could come and go as he pleased. Now he raced up and down the stairs without hesitation, and was free to piss on the barbecue whenever he pleased. Friday was the real test, and we were both nervous about leaving him alone while I went into Sydney for a few hours to meet my new work colleagues, but when I got home he was right where I left him. He was home.

I don’t know what happened that fourth night, but something changed. It sounds unhinged but, those first few days, I felt like he was testing us: doing the opposite of what we wanted on purpose, pushing us to the limits of our patience and insight, perhaps to see if we were worthy of his trust. We have no idea what his life was like before we adopted him, but if it was anything like the average racing greyhound, it was probably cold and cruel.

Since then it has been smooth sailing. We’ve taken him for walks and road trips, brought him to visit family and friends. He loves the beach and paddling in the ocean. He accepts pats from strangers (under the chin and on the back please – do you like getting your head ruffled?) but he’s wary of children and other dogs. Yet in the past few weeks working in the quarantine zone, we’ve walked him every morning, and even that wariness is changing into curiosity.

He’s sitting beside me in the office while I edit this, “intensely relaxed” (licking his genitals). We’ve come so far in the past few months that he’s almost like a different dog, a truer version of himself that took a little while to shine through. 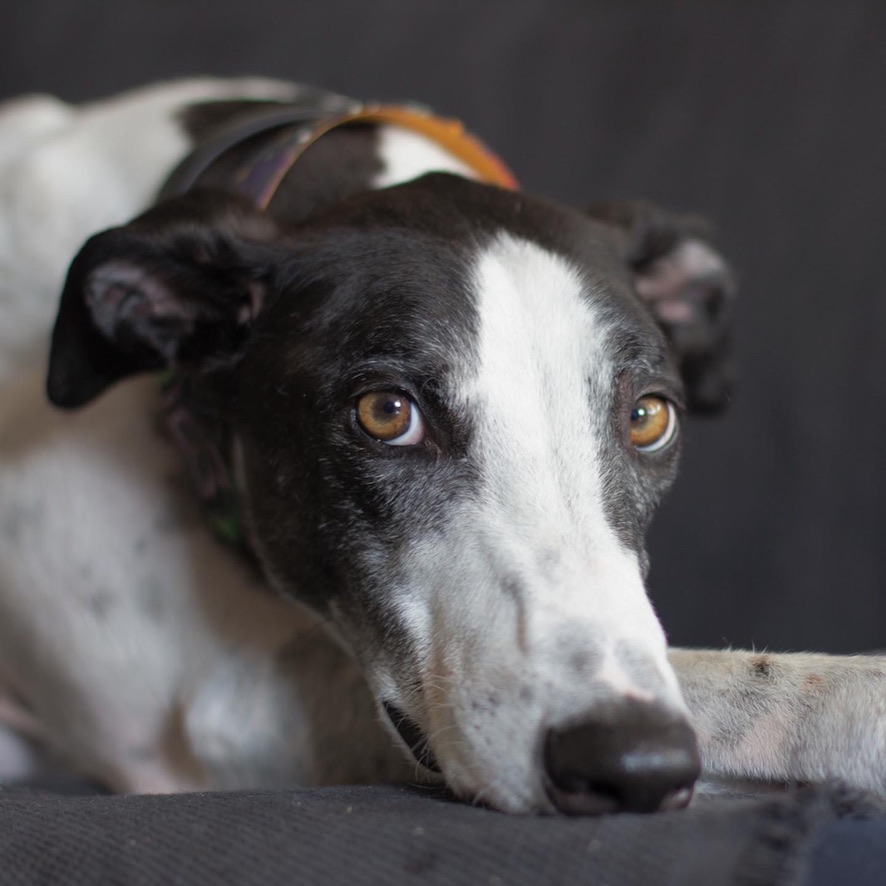 Spyro has taught me more these past few months than any human. I’ve learned how to be a mediocre dog dad, and I’m working hard on becoming a good dog dad. I’ve learned patience, how to stack chairs on the couch, and to never trust Spyro with a plate of mince pies because he is the second fastest land animal on Earth and surely one of the fast eaters.

Spyro is learning too. He’s learning how to be a family member instead of a resource. How to relax, how to play. That his worth grows over time instead of diminishing. That hands give, they don’t take. That our love is unconditional. That ceiling fans and vacuum cleaners aren’t scary, but I’m not sure he will ever trust the microwave.

When I look into his massive hazel eyes, keeping him just far enough away that he can’t lick my face – not that it stops him from trying – I can’t imagine our family without him.