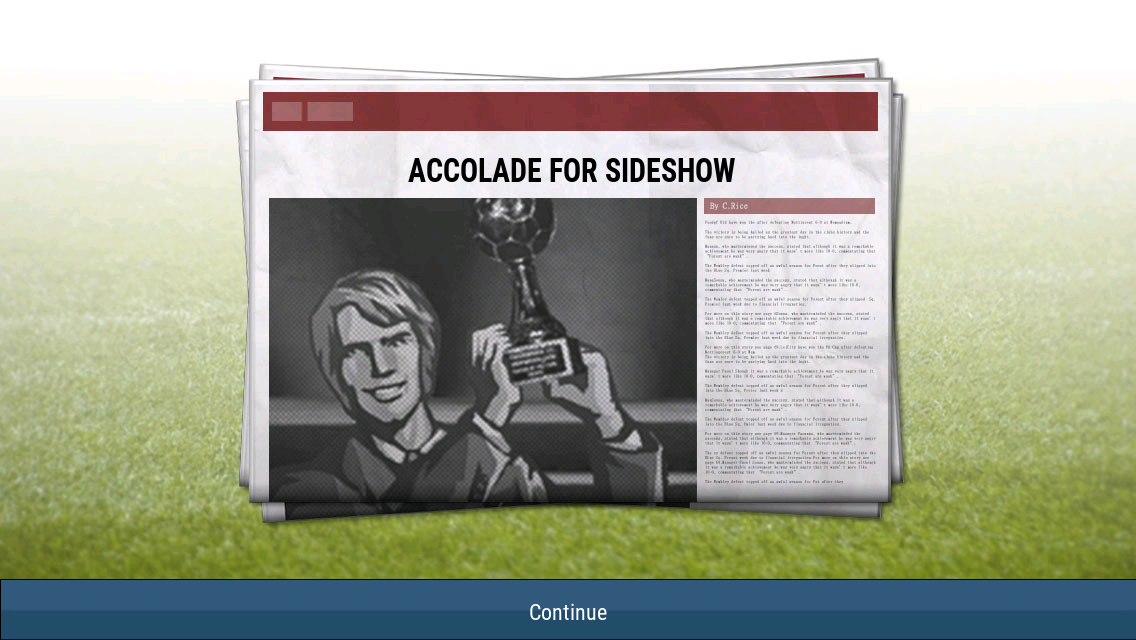 I’m a third of the way through my first season managing Edinburgh City so let’s consider this my interim annual review and check whether I am 33.33% the way towards achieving my goals and objectives. Let’s check the stats!

So tell me about a time when you met a deadline? 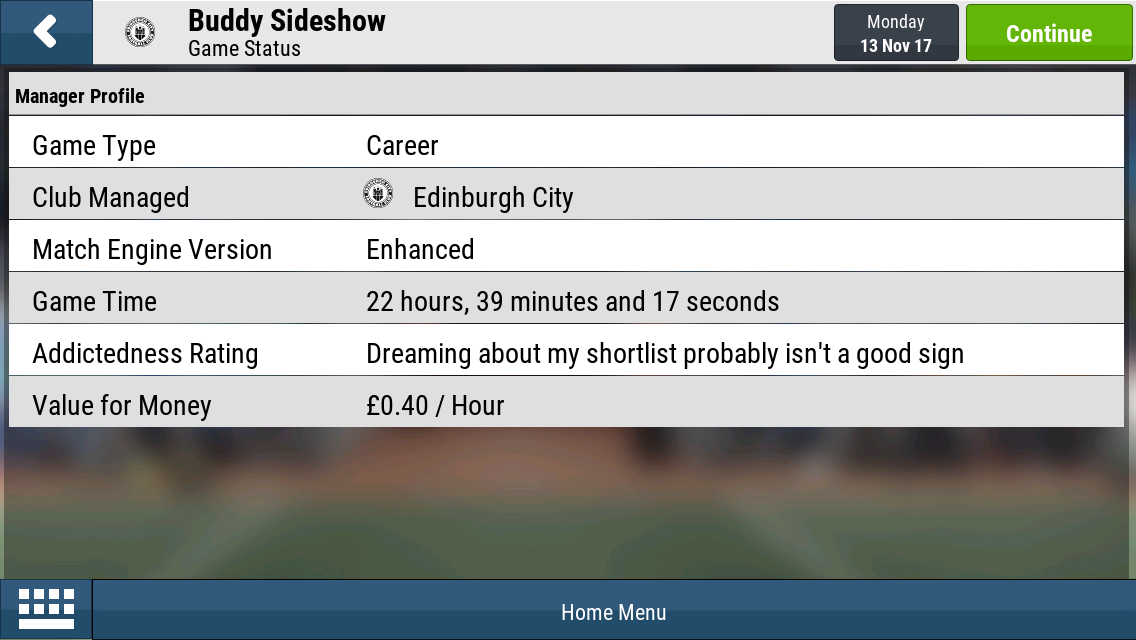 It’s been about three real, human, Earth weeks since I bought Football Manager Mobile 2018. In that time I’ve played just under one real, human, Earth day. It’s always sobering to see stats like this and videogames are particularly cruel in laying out the facts. I’m fine with facts because I’ve played the game on my daily bus rides commuting to and from work with a little flutter in the evening on the couch while my wife watches Project Runway: All Stars and I wait to tune back in for the runway and final judge critiques which are the best parts of the show anyway. I have no shame in this game. No shame whatsoever. The genre really suits the mobile experience: quick bursts of activity, simple decisions, easy to pick up or put down at a moments notice when I realise I’m about to miss my bus stop.

My wife just gave me a concerned look when I told her how much I’ve played so far. I swear this isn’t a The Simpson’s Tapped Out situation.

I’m not sure how I feel about the Value for Money statistic though. That’s a dangerous kind of emotional maths at play and an odd way to measure enjoyment. As I said, videogames can be a cruel hobby at times.

So tell me about a time when you managed a team? 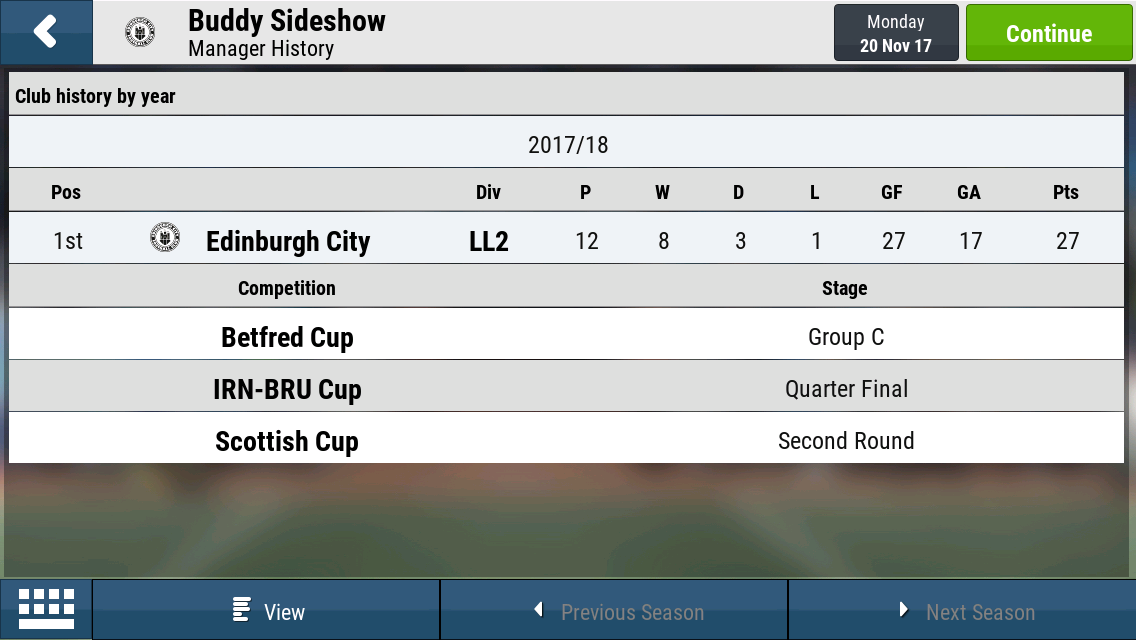 Mark my words down on the nearest available surface in permanent ink: I’m taking Edinburgh City to the top! I am crushing it and the team is playing well and winning often.

So tell me about how you manage a team?

Previously I struggled to pick the right team and relied on luck with my first few matches. The small screen on the iPhone was a barrier at first but I’ve found there are simple screens/features to tackle this problem. Listen to me, I’m writing in puns by accident. “Tackle”, I sound like a right old fisherman.

I know the team now. Having played a dozen or so matches I know that Ian Prior was a total liability in defence (and has hence been demoted) while Hendrie, Benzema and Ballantyne are my star strike team and are probably carrying the team through most matches (and are lavished with praise afterwards). These might all be fake players but they’re real to me, damnit.

So tell me about a time when you won an accolade for being a good manager in a fictitious football league? 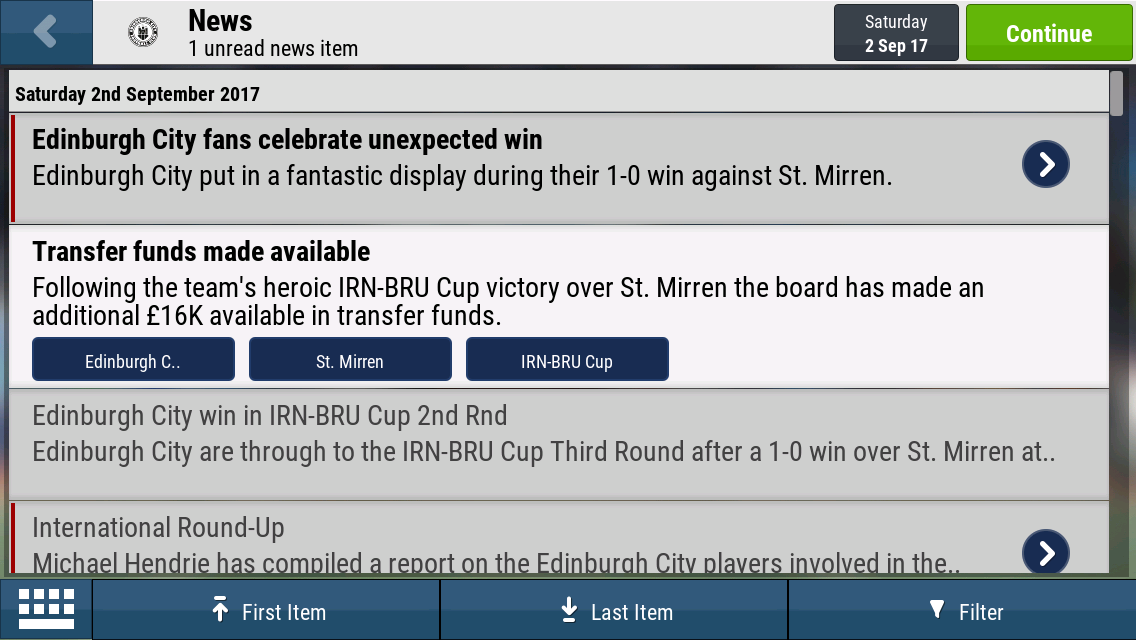 In the aftermath of my first Giant Killing match, the Board reward me with an additional £16k of transfer budget. Where the hell did that come from? You see? I told you renting out the function room over the Fringe would be lucrative!

So tell me about a time when you managed a budget? 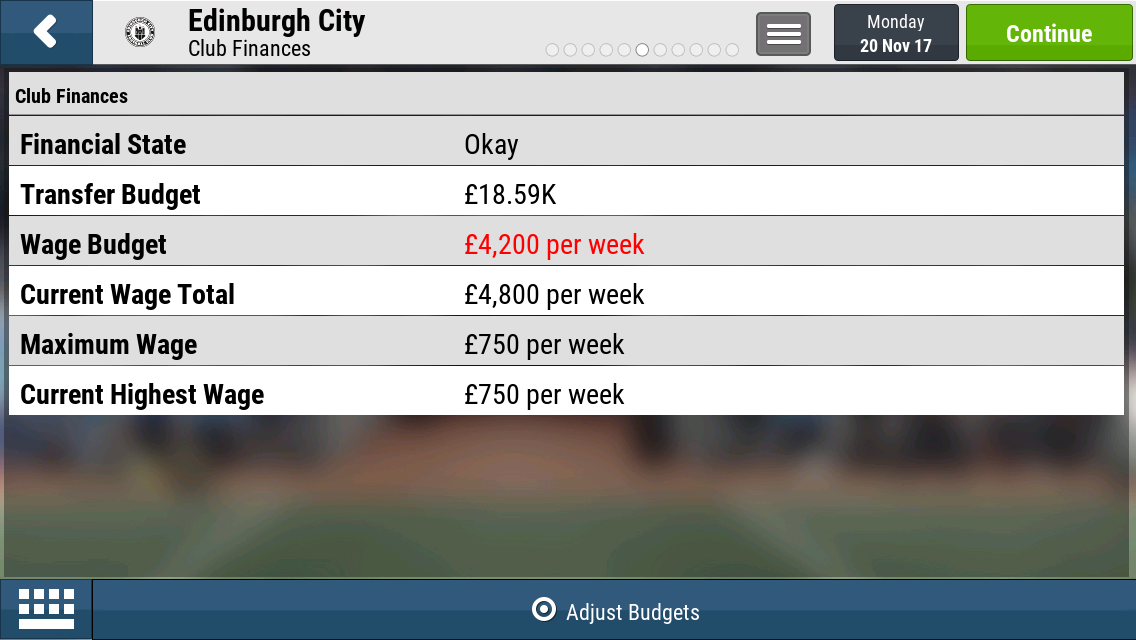 In my eagerness to renew contracts of some of my key players I accidently busted my wage allowance. I’m spending £600 more each weak than I can afford. I’ve tried re-negotiating on the high salaried players but none are having it. I’ve listed a few players for transfer so my best bet is to thin the herd. I can allocate some of my transfer funds towards wages but it isn’t enough to bridge the gap and would leave me with a genuine £0 transfer funds which feels way too exposed a position to willing impose on myself.

So tell me about a time you worked with senior management and executives?

If you flick through this slider, noting the date in the top right corner, you’ll see the story of management in the eyes of the Board.

Everything has grown green with the exception of a red Finance and a slipping amber Harmony. The decreasing Harmony I think is due to a few players who are unhappy about being left out of first team football (then they should train harder and suck less) and maybe the fact I’ve listed a few players for transfer when we are out of the transfer window and so they couldn’t actually be transferred (which is a total dig, I get that).

Had I not been taking the occasional screenshot for these diaries I wouldn’t have spotted the falling Harmony. I’ll need to see what I can about that. Fire the people who are complaining? That seems fair.

Overall though the Board are “absolutely delighted” which makes me so proud I just quoted praise from an imaginary group of people. 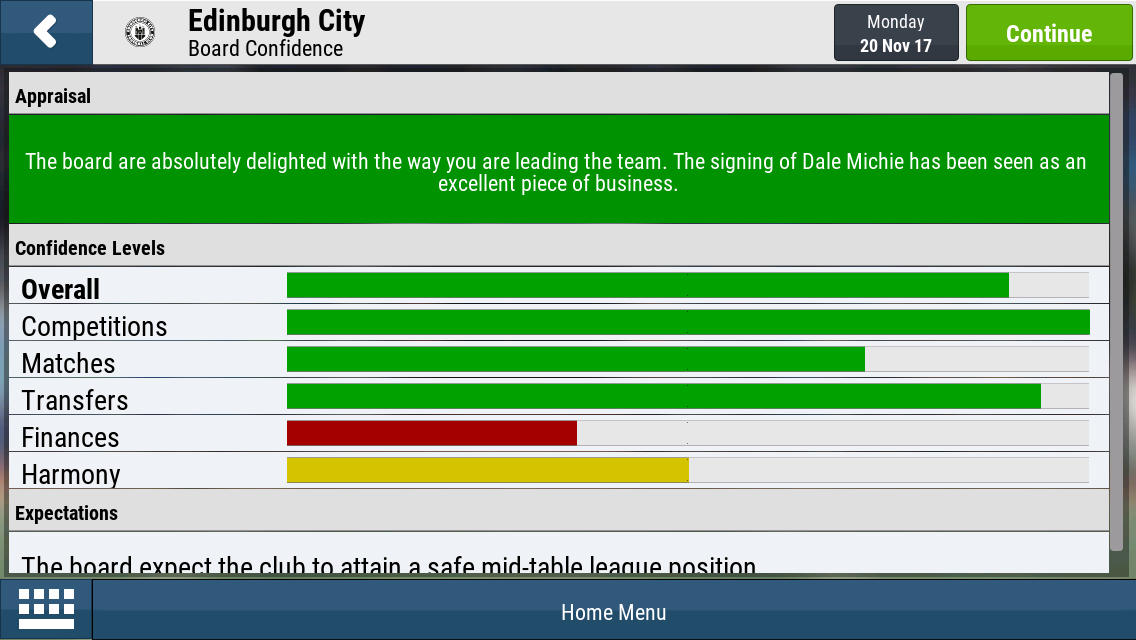 And finally, tell me about a time when you wrote about playing a football management simulator?

Well I’m going to play more and report back with a season wrap up. Maybe we’ll have a season wrap up party after my upcoming battles. Until then check out the The Football Manager DiariesTM and listen keenly for the sound of victory trumpets.