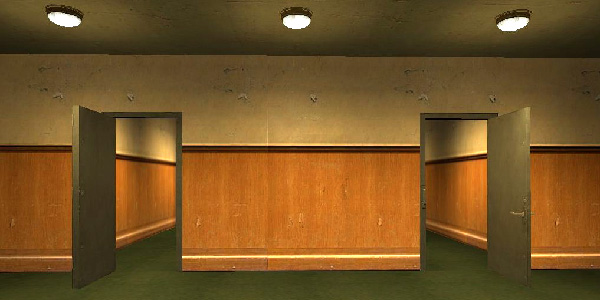 The Doors of Perception.

The Stanley Parable is one of those games everyone recommends wholeheartedly before any discussion even begins. What’s this Stanley Parable? Think I’ll read about it and lea- oh no wait I’m being linked at to “just go play it!”. This is why, obeying my blogging masters, I downloaded it only to promptly forget about it entirely.

Try and not make the same mistakes I do.

And at its core is the message: video games offer freedom of choice while video game narrative demands compliance.

I said it there in ten words whereas The Stanley Parable says it with two doors.

As the narrator tells me as I take Stanley away from his mandated button-pressing I am searching through the abandoned office space for his missing co-workers.

I enter a room with two open doors to which the narrator continues, “When Stanley came to a set of two open doors he entered the door on his left”. But both doors are open. Nothing more is said.

It’s a simple device but it worked. I felt the tug; That uncertainty in my chest just slight enough for me to become uncomfortable in not knowing the right answer, not knowing which was the correct door.

Because of this immediacy, The Stanley Parable is structured more like a newspaper article or essay than parable. The point is made quickly and succinctly early on with the repeated playthroughs of its branching paths offering more subtle and nuanced explorations of the theme.

Yes, the story is best told by the narrator when I am complicit to his demands. Characters are explored, the plot unfolds and the pages are turned and I watch.

Yes, I feel more alive when “disobeying” the narrator even if the path I carve exposes me to developer textures, a barren skybox and abandoned plot. By disengaging myself from their intent I become somehow more engaged.

Those are its two extremes and between them is a point worth making about the often contradictory developer intent and player autonomy. Arguably its a point equally well made though by watching the following recording of my playthrough should you not want to go through the hassle of downloading, forgetting and playing it for yourself.

I lasted through three of the reportedly six endings before the scenery behind the scenery was exposed.

Why was I doing this again?

I’m frustrated when artists inject too much message into their art. Or when creativity is stifled by an imposed message. Or when I see the same message in different works.

Art is when something is communicated in a particular, perfect way such that any other way fails in comparison. That’s my definition.

Pretentiousness is not art.

Pondering is not art.

Derivation is not art.

Repetition is not art.

Again these are my definitions so calm yourself. Also trigger warning on the following interpretations.

Is the blank canvas really a statement of infinite creative possibilities or is it just another toilet turned sideways? And if not them then what about the glass of water on the shelf that purports to be an oak tree?

Granted they’re aesthetically different in execution but the message is the same in my mind: All three are objects “transformed” merely by the expectations and titles bestowed upon them.

I can’t tell how much is homage, or fundamental truth, or why each is seemingly created in a vacuum, each in ignorance of what has come before. But to my mind, those two guys ripped that first guy off. It’s been done before and done better. Derivation is not art. Repetition is not art.

I don’t believe The Stanley Parable was created as an art-game but it has been created with a very clear message about narrative dissonance in mind. It’s a message I’ve seen before in many different places: in features, blogs, forum posts and Ebert/Art diatribes forever tapping this technical well.

The Stanley Parable is wonderfully clever and cool but intellectually I’m left unsatisfied.

Has rephrasing the discussion as a game unearthed anything new? I don’t believe so. It’s well packaged but this feels like a case of style over substance. I’m just confused as to who this parable is for? Are we seriously meant to learn from it?

Am I over-intellectualising? Am I asking too many questions and answering too few? Am I weakening my position by abusing gimmicks?

And did BioShock not make this exact point clearly enough?

Or Braid? Or Seven Minutes? Or Portal?

While the delivery is novel and rare and deserving of attention, The Stanley Parable positions itself so dangerously close to the fourth wall it feels thin in comparison to Dear Esther. It’s yet another game about games.

But it remains one of the best mods on the subject. This style of organic, flowing story is marvellous but it’s still pointing inwards at what it means to be a video game. I’m ready for them to look outwards and examine, capture, detail and explore the rest of the world.

And kindly leave the jokes about tropes to the professionals.