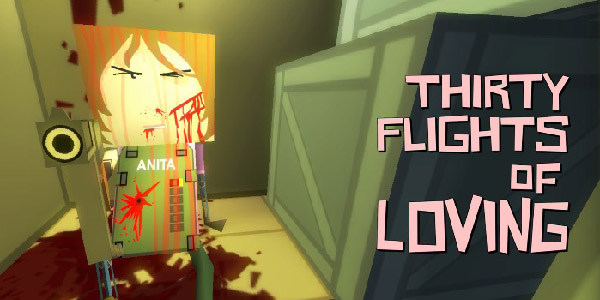 Beginnings and ends of films are always the coolest. The middle is less so. When they take all the good bits from the middle and cut them together they call it a trailer. Trailers are cool. Often they’re better than the film.

In many ways it’s a montage- a technique rarely deployed in videogames outside of developer Blendo Games. The cerebral cuts of a heist gone wrong play out of order elegantly shaping the play as a disorientated criminal scrambling to recover a botched mission.

What’s going on? How did this happen? What now? Just move! Move!

But as I move forward, carting the bullet-ridden corpse of my compadre, the scene flashes and changes. Another transition, another jolt. Now I’m drinking with a girl I recognise. She was trying to shoot me earlier. Another disastrous piece of the puzzle falls into place.

In a way Thirty Flights of Loving is a puzzle game. The puzzle being a narrative experienced rather than solved in any traditional sense. What’s going on? How did this happen? I’ve seen this before. Which is why those of a more traditional disposition will dismiss Thirty Flights, as they did Dear Esther, as being another “not really a game” videogame. Their potency comes from their brevity and it’s only a matter of time and patience before the bigger boys and girls start putting montage sequences like this into bigger games.

The puzzle of the narrative and its conclusion do not provide an answer to my question: What the hell just happened to me? Instead I find myself in an art house lobby, with credits hung on the wall alongside game assets as a crowd mingles and drinks while surf rock soundtrack gently rocks.

There may very well be a solution to what the hell just happened to me. For the time being I’m cool with just chilling in the lobby. I’m still in a heady vibe from the ride.  And the ride only lasted ten minutes.

And this was well over a month ago.