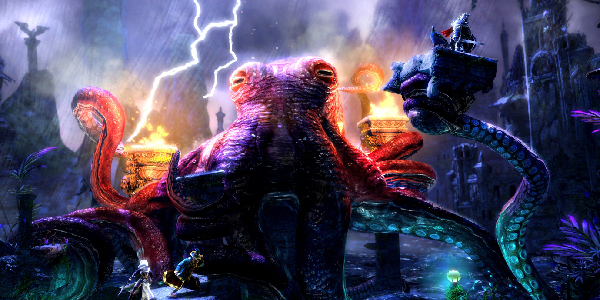 The interesting thing about Trine 2 isn’t how pretty it is but is actually the control scheme. Yes by now you’ve read every other review and distilling their ornately-crafted, little descriptions down to a list of adjectives Trine 2 is: stunning, prettiest, gorgeous, amazing, rich, vibrant and lovely.

Personally I describe the extravagant use of vivid colour as akin to God the Almighty eating a giant bag of Skittles and throwing up all over the world. Trine 2 is all those positive descriptors but especially mine.

But back to the buttons: The reason the heroic trio comprises a wizard, a thief and a knight is to separate all the combinations of conjuring, grappling and fighting into three control schemes. You’re essentially playing as one character (at a time) where traditionally every possible action could have been mapped to every available button, trigger and d-pad in a convoluted mess. Instead relatively few buttons are used and the visually distinct characters help reinforce the particular ‘mode’ you’re controlling.

So conjuring and climbing boxes as the wizard, then switching to the thief to grapple-hook away and switching finally to the knight to bash some goblins upon landing is fun and fluid. This in theory frees up your mind and fingers to solving the puzzles and actioning the action. It’s easy to overlook this cleverly designed control scheme and get lost in the stunning world. Multiplayer doesn’t multiply the experience here, it divides it by three. When the three of you are locked in to a single character everything goes out of balance. And I don’t just mean the balance of the puzzles, which left unregulated on the players part sees the wizard become ye oldé forklift literally carrying the other players.

It’s all the pitfalls of cooperative playing/thinking that Portal 2 somehow avoided. Unfortunately my misguided dream of a three-player coop game was the sole reason why I bought Trine 2 in the first place.

Which left me with two unimpressed friends and this side-scrolling fantasy cliché to plod through on my own.

A trip to the options was necessary. First went the difficulty: down to easy because, as mentioned, there’s no challenge to the combat so why make it difficult?

Second went the English: I was so offended by the hackneyed voice acting that I switched it to Spanish and turned on the subtitles. Los españoles se esconde la mala escritura. La voz de sonido Inglés actores como presentadores de los niños no la televisión. I suspect the writing didn’t quite make the trip over from developer Frozenbyte’s native Finland.

The rest of the game was pretty bland and forgettable. There’s no learning and testing and raising the bar with the puzzles. I know in order to back that up I should list some examples but I struggle to remember any. Most puzzles are immediately obvious and there are no “a-ha” moments only “oh, so that’s what they wanted” solutions when otherwise. I seem to recall smiling at the big creatures on screen and the final boss fight was very good but by then it was too little too late for me.