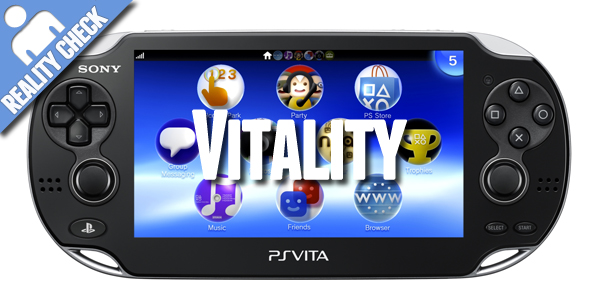 Welcome to the Split Screen Playstation Vita launch special: no features, no reviews, one picture of the device partially obscured by the title of this article and not a single ‘Livin’ La Vita Loca’ joke. It’s hard to overstate our anticipation for the new console, but hopefully our readers won’t be swept up in the wave of hyperbole. Hang on tight.

I had a quick play with the Vita last week. Physically, it’s quite impressive: it feels good in your hands and is light without feeling fragile, the screen is sharp and responds well to the touch. Like most things Sony make these days, it’s impressive without being truly lustworthy: it certainly lacks the cool factor of my Dad’s Walkman with built-in digital FM tuner, which I used to love stealing and taking to school. Sorry Dad.

Once you actually switch on the Vita and start using it, the ‘Livearea’ interface is classic Sony rubbish. Like everything else released in the last five years, it resembles iOS, but Sony have added a layer of visual mess that serves only to distract and disorient the user. It doesn’t re-invent the wheel: it re-moulds the wheel into a stellated dodecahedron, vomiting colour and confusion into your eyes. Speaking as the owner of a Bravia TV which inherits both the PS3’s ‘Xross Media Bar’ and a 3D carousel effect (I’ve included some pictures below), unfortunately all Sony’s products are as incoherent as this. Survive the user interface from hell, and the Vita reveals itself as another totem to Sony’s failed mammonism. Its features are aimed at improving Sony’s coffers at the expense of the user’s experience: in Japan, PSP owners could load some of their old games onto the Vita for a small fee. In the rest of the world, you’ll have to buy them again at full price from the Playstation Store. There’s no good reason why you can’t rip these games to your computer, since they are readily accessible for people who want to pirate them anyway. Like most DRM implementations, it only inconveniences people who have legitimately purchased the games. You’re only allowed to use one Playstation Network (or whatever it’s called this week) account: don’t worry though, you can just wipe all of your data if you need to change accounts. Problem solved!

Compare this with an iPhone owner’s upgrade process: back up the old phone, transfer to the new one and go. I’ve done this with three or four iPhones with no problems. You can use your family’s accounts to share their apps with your iOS device. Never mind that that the iPhone (or indeed, any smartphone) has a cheaper initial cost than the Vita and comes with 32GB of internal storage. The Vita’s memory cards are proprietary and expensive. Let’s not forget the elephant in the room: a smartphone is also a mobile phone and they are selling faster than freshly-baked pastries. The Vita’s real competition is not the 3DS: it is the smartphone legion, which didn’t exist when the PSP was released in 2005 and have revolutionised how we play games on the go.

Sony’s US marketing team are targeting PS3 owners in their mid-Twenties as ideal Vita early adopters. This doesn’t even include me. The iPod touch is aimed at everyone, not just people who own a Mac. The DS wasn’t purchased solely by Gamecube owners: everyone with a pulse bought one! As gaming becomes ever more popular, the Vita remains a niche device, and there is both literally and figuratively no room in my pocket for one.

I don’t own a PS3: although I would love to play the Uncharted series and LittleBigPlanet and wouldn’t mind having a Blu-Ray player, it would gather dust because I still have so many games to play for the Xbox 360. It worries me that people are already talking about the ‘720’: not right now, thanks. I’m not ready. Not only do I have an ever-expanding pile of shame underneath my television, I still have original Xbox games that I haven’t played. I’ve spent nearly one hundred hours in Skyrim since November, frantically trying to finish it before Mass Effect 3 comes out. I used to play the same Mega Drive games over and over until the silicon melted, but the modern gamer is spoiled for choice. I now quite enjoy the periods of game-free quiet when I can listen to music or read a book on the train. I haven’t played my DS in nearly a year, but I do play the odd quick game on my iPhone. I am a ‘hardcore’ gamer and yet dedicated portable games consoles no longer fit my lifestyle. When did I get so old?

The Vita is new and sparkly now, yet after the new Xbox and Wii U arrive it’ll be in the same position the PSP was: underpowered and ripe for being overtaken by rapidly evolving smartphone platforms. This never ends, people. It never ever ends. Technology moves forward: your new smartphone will be outdated in a year, lethargic in two, obsolete in five. The DS and Wii sold well because they introduced exciting new ways of gaming that resonated with people who had never played games before. The 3DS initially struggled at retail because the software didn’t take advantage of its innovations: now that games like Super Mario 3D Land are out, sales have picked up somewhat.

The Vita brings nothing new to the table, unless you feel that gaming genuinely lacked a rear touch pad until this moment of triumph. It is a Swiss Army Knife of gadgets, wedging touch panels and cameras in every crevice. Have you ever owned a Swiss Army Knife? They are mediocre screwdrivers, useless scissors and, most importantly, crap knives.

As the philosopher Zoolander once said, “I’m pretty sure there’s a lot more to life than being really, really, ridiculously good looking.”