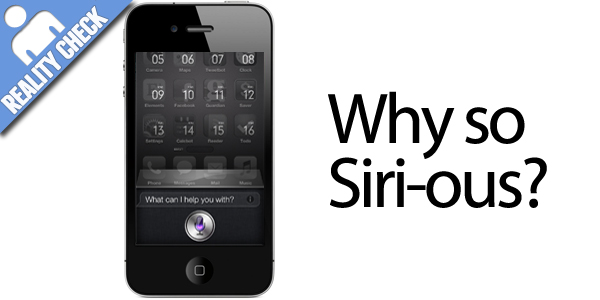 Reality Check: Why So Siri-ous? I’ve had the iPhone 4S for a week. Through a combination of switching from the abominable Orange UK network to Three, updating to iOS5 and upgrading from the iPhone 3GS, my phone experience has been transformed from continually staring at a loading screen into liquid lightning.

The best new feature of the iPhone 4S isn’t the faster processor or the better camera; it’s the inclusion of Siri, a virtual assistant that can help simply by talking to your phone. Android and Windows Phone users, or users of the iPhone 3GS from 2009, will no doubt point out that those phones already have similar functionality. That’s true and it coaxes poor writers into repeating the classic paraphrased Steve Jobs quote: “good artists copy, great artists steal.”

Good artists copy an idea from someone else, but they don’t add any value to it in the replication. Great artists steal an idea, meaning they take the idea and make it their own by adding a unique inflection. This is how Apple ‘think different’ from other technology firms: although the ideas themselves aren’t original, it is the way they build on the ideas that distinguishes them. Apple didn’t invent the personal computer, mp3 player, tablet or the smartphone (but they’ve done more than you may think on the latter) but they have developed those ideas into something unique. The fact that they often purchase the companies who originate the these ideas rather than ripping them off is also a differentiator, but let’s not get bogged down in the details. If you want to call your mum, just tell Siri and it will remember who your mum is based on previous information. You can say “Book a meeting with John at 3 PM on Thursday” and Siri will point out you’ve already got a 3 PM that day, asking if you’d like to move it to another time. It’s not perfect: in the UK, you won’t be able to look up businesses or restaurants, so Siri often settles for offering a web search. The boon of using natural language provides tangible benefits for everyday use, as well as breaking down another technological barrier. You don’t have to say “COMPUTER: Text message. Recipient: Craig Wilson. Body: How are you Craig? SEND MESSAGE” in booming Received Pronunciation. You can just say “Tell Craig how are you?” and it’ll take care of the rest.

As an alternative to typing, you can dictate anywhere you could use the keyboard. It’s based on the same Nuance technology used in Dragon Dictate, but unlike Dragon, it doesn’t need to be trained before using. Some words are flagged with a blue dashed line and can be tapped to resolve ambiguity. It’s as quick, if not quicker than typing, but I still find that when I’ve got a lot to say I need the extra time typing allows to formulate sentences in my head. If you’re easily excitable, chewing on something or Glaswegian, these are the kind of things that make Siri sad. Siri is genuinely useful and often hilarious. It’s easier to press the home button – or hold it up to your face like you’re making a phone call – and say “set a timer for five minutes” or “what’s the weather like today” rather than working your way through the menus. It’s particularly good for users who have impaired vision and builds on previous accessibility features like VoiceOver. It’s interesting that as iOS, Android and WP7 have reached the point of essential feature parity on pinch-to-zoom and gestures, Apple have now raised the bar on voice controls and encourage you to bypass the multi-touch paradigm they popularised.

What do Apple’s competitors make of Siri? Google’s Andy Rubin says “I don’t believe that your phone should be an assistant”, which is Google speak for “we’re out of toner for the photocopiers, but Android should have this in six months”. Something similar already exists in Android, but it’s not got quite the same level of PR pizazz. If smartphones aren’t meant to assist us, then what are they for? Likewise, Microsoft’s Andy Lees says he doesn’t think voice control is “super useful”, which doesn’t really explain why Microsoft spent all that time building it into Windows Phone 7. It’s safe to assume that everyone’s phone will have this in the next couple of years.

I dictated this article using Siri rather than typing. Obviously I had to dive in with the keyboard for some editing afterwards, but it’s a good indication of how useful the technology is, even in its infancy. It also shows that even the most harsh, uncouth accent can be accounted for, as long as you speak politely and clearly. It’s the only computer program I’ve ever felt the need to thank, when users spend traditionally their time hurling expletives at them. What a pleasant surprise. Every week in Reality Check, we tackle the most interesting technology and gadget issues in the usual opinionated, irreverent Split Screen style. You can read past articles here.