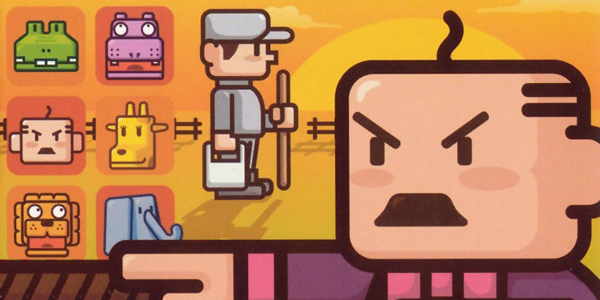 The animals didn’t come in two by two. They must have came in by the threes, or how else would we have been able to match them up? Zoo Keeper is a ‘match three’ puzzle game in the vein of Bejeweled: use your finger to rearrange the animals into lines of three, watch them ‘pop’ and hope they aren’t being ground into burger meat in a brightly-hued abattoir somewhere.

That’s all there is to it, really. Match enough of each species and you’ll

The cycle repeats anew. There’s a monkey, lion, panda, crocodile, hippo and giraffe. Later on they are joined by a rabbit, who would feel a bit out of place in a zoo to be honest. The animal you neglect in your matching adventure gets a bit grumpy, which is a clever visual indication of how to quickly finish the stage and

Bejeweled ends your game when you run out of things to match. No more moves. Game Over. For all its enduring popularity, Bejeweled is fundamentally broken: it punishes the player for failings in its own procedural algorithms.  Zoo Keeper gives you extra points and drops some more animals in, perpetuating the cycle. Despite being basically the same game with a palette swap, in practise the two play completely differently. Where Bejeweled emphasises forward planning, Zoo Keeper is all about the thrill of the chase- the thrill of the The action gets faster and faster to the point of neural overload. Patterns emerge from the animal matrix as you go cross-eyed from all the hyper-saturated cuteness, like a modern Magic Eye puzzle. There’s a kind of strategy to it, but the strategy is holding out long enough before triggering the magic binoculars that reveal a matchable menagerie. A crude green bar at the bottom of the screen trickles away inexorably: while combinations of multiple animal matches can extend your time, beyond the first few levels it’s a desperate scramble of swipes to match enough to reach the next

Sometimes, it’s kind enough to give you a break. An animal does a little dance for you before the game continues, or the zoo’s ‘abusive’ manager waves his cane in rage. Although my first experience of Zoo Keeper was with a clunky browser game, followed by the decent DS port, it feels at home on iOS. With the mouse and stylus gone, the last barrier to immersion is removed. It’s just you, a grid of animals, and your slowly eroding thumb. As anyone who as seen my thumbs will know, they are dire need of pruning. But your melting epidermis is nothing, when all you care about are those two sweet words:

At some indeterminate point in time, your thumb fails you and it’s all over. A trip to the leaderboards shows you that no matter how good you think you are, there’s always someone in Japan who has managed to max out the built-in scoring mechanisms or exploit them (I hope it’s the former). Then the train pulls into its destination, or your friend arrives for lunch, or they’re banging the bathroom door because you’ve been there so long they suspect you have died. Zoo Keeper is the five minute break filler you never knew you were looking for, but the real danger is when life becomes a five minute break from Zoo Keeper.

As an added bonus, here’s the entirety of Zoo Keeper’s story for your viewing pleasure.