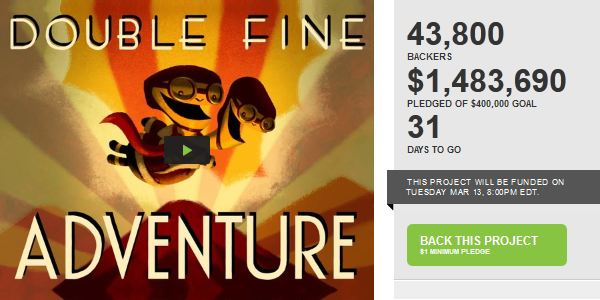 Double Fine funded their next game in less than eight hours. Tossing aside the shackles of publishers and third-party financiers they used the hip donation site Kickstarter to pitch fans to directly support the development of Adventure, a classic point-and-click adventure game.

As the total soared past one million dollars before even the Earth had a chance to complete its daily routine, everyone but me celebrated.

For I am a bureaucrat: A soulless drone guided entirely by policies and guidelines. I run cost models, fill progress reports and point out that a lot of people just pre-purchased the Emperor’s new clothes based entirely on the designer label.

What alarmed me was how willingly people donated given how little details had been made available. Sure there’s the usual tiered list of donation gifts and a funny video but Double Fine promise involvement in the development process. But outside of the documentary what does that mean? What does my money actually buy me? To what extent, as a financial stakeholder, am I actively involved?

“There will be a private online community set up for the backers to discuss the project with the devs and submit their thoughts and feelings about the game’s content and direction, sometimes even voting on decisions when the dev team can’t decide”, says the Kickstarter page.

“Oh,” replies Craig, “But it sounded like more than just dropping lines into a suggestion box in the video. Anyway there’s no guarantee that you’ll listen to my suggestion anyway. Technically shouldn’t the guy who donated $10k have more say, or at least be given more consideration, than the chap who tossed in $15?”

The Kickstarter page doesn’t have anything further to say on that point for now. Such details will undoubtedly emerge but the fact remains that a group of people are giving Double Fine $1.5 million under no firm contractual obligation. Perhaps it’s all there in Kickstarter’s fine print but it remains a shockingly large figure.

It’s also a fantastically large middle finger at DRM in favour of pay-what-you-want as a means to subvert piracy.

I sat down to write a comment piece and ended up in Excel. Look, don’t judge me. I swear I used to be cool.

So while the most popular donation was $15 it is actually the $30 donation group who are the most lucrative in terms of contribution. Chances are they’ll treat everyone equal and seek consensus rather than prioritise their audience’s opinions in such a contrived way. Still the guy who paid $10,000 for an awkward lunch date with Tim Shafer and Ron Gilbert should get one idea that needs to be implemented. I’d pitch an escort mission or some clunky Iraq war analogy.

Feature creep- Myself and every other project manager just had shivers down our spine. It’s safe to say that the $400k target meant something to them in terms of number of staff working some number of hours to deliver a certain bit of software of definable size. Double Fine has raised $1.1 million more than their original estimate.

“Q: What happens if you go over the goal?”

“A: The extra money will be put back into the game and documentary.  This could result in anything from increased VO and music budgets to additional release platforms for the game.”

Feature creep kills projects. If they are indeed obliged to pour the extra funds into development, be it by introducing more features or involving more staff, then the original promise of “a classic point-and-click Adventure game” will presumably be harder to maintain. Bare bones point-and-click be damned! Adventure should run Havok and Euphoria.

Incidentally the above answer seemingly contradicts the line “Once the game is finished, backers will receive the completed version in the available format of their choice”. If all the backers receive a copy in their chosen formats then what additional formats are left? Unless they mean a spin-off iPhone version or something like that- Which again isn’t technically what the original money was going toward.

Can classic point-and-clicks do DLC?

I don’t have a problem with the concept of funding a game during development. I do have a problem however that no-one else is mentioning Overgrowth. Wolfire have been doing this exact crowd-funded model for over a year now: They’ve consistently released weekly videos chronicling Overgrowth’s development and genuinely communicate with fans through their @Wolfire twitter and forums. No lavish production crew required. Not to mention Wolfire didn’t have the benefit of having all the money up front.

I wonder how Double Fine will define their margin. I’m used to seeing a price built up by costing the work required and then thwacking on a percentage for profit of say 10%. Will accounting be accountable in providing “complete transparency”? How are we to know they don’t purposefully go low for a healthy profit? Or is that even something we are entitled to question? You see for me it keeps coming back to the lack of details.

Should they choose to swim around in their new swimming pool of money I hope they at least stream it online. Perhaps they can hide some of the excess with a charitable donation to everyone’s favourite charity (except for mine, remember I’m soulless) Child’s Play (I am without soul).

As for myself, I will buy Adventure when it’s complete. After I play it I’ll seek out the documentary to further the experience. For the 19,750 donating patrons buying more than just the finished game well I find it hard to see how they aren’t going to ruin their first playing of Adventure unless classic point-and-clicks no longer rely on solving puzzles, mysteries and enjoying the unexpected.

Finally I take offence to the notion that “adventure games are a lost art form”. I know a giant dog and hyperkinetic rabbity thing who are preserving the art form just fine.