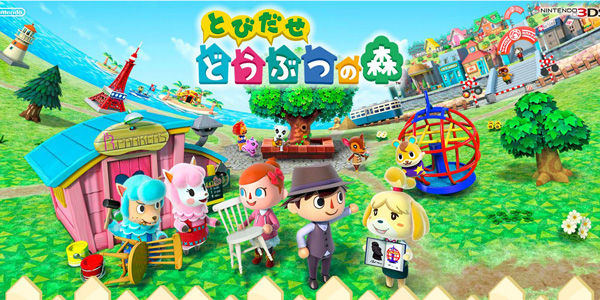 Animal Crossing: New Leaf is the latest entry in Nintendo’s life simulator series, and people can’t stop talking about it. Austin Walker wrote about New Leaf and race for the New Statesman, while Jeremy Parish has talked about nostalgia at USGamer, not to mention all the tweeting. If you haven’t muted #acnl on Twitter by now, you’re a braver soul than I.

I don’t own a 3DS and haven’t been able to play New Leaf, which is probably for the best since I was hooked on AC: Wild World for the DS. Besides, it’s probably largely the same game as the last version- this is Nintendo we’re talking about, after all. I recently went back to my old village in Wild World, and documented the experience in the second issue of Five out of Ten.

I imported Wild World from the USA in December 2005, as it wasn’t released in Europe until March 2006. The original Gamecube edition of Animal Crossing didn’t make it to Europe – we got the atrocious Doshin the Giant instead – and a friend introduced me to its imported delights. Fast forward a few years, and hardly anyone in university owned a DS and fewer had Animal Crossing, so I had few players with which to share my adventures. As with most games of the day, information came from sources like GameFAQs and fan sites.

Social networking was in a nascent state. Twitter didn’t exist, Facebook required an academic email address to create an account, and people still used Bebo. These were dark times, when no one knew what you were having for dinner, let alone could watch a video clip of it. Now, of course, everything is shared. It’s over-shared where you have to opt out of sites sharing your life with the public. No one cares how many stars I gave a book on Goodreads or what I’ve been listening to on Spotify. Games like Animal Crossing, however, are so varied and packed with unique moments that it would be a sin not to share them. We’re lucky to finally have an infrastructure in place that can support this sharing.

Yet it’s not just sharing through social networks that has boosted the prominence of New Leaf: the way in which we talk about games has changed. Gaming culture has changed. If we compare Eurogamer’s review of Wild World with New Leaf, the difference is night and day. In the Wild World review, the prose reads as old-fashioned, but what’s really different is how the writer frames their experiences. Anecdotes are italicised, clearly delineated from the ‘real’ review and its dry lists of mechanical nuts and bolts. In the New Leaf review, the writer’s experience is the review. What’s more, you might not even have noticed: although Chris Donlan’s article is well-written, experiential writing has become de rigueur. I guess whether or not this is ‘better’ is arguable – although I’d argue that it’s definitely more interesting to read and tells you more about what it’s actually like the game – but it sure is different.

New Leaf is a game for a social era. We’ve become used to the idea of having windows into our lives. We leave the town gate open for visitors have a look and sample the fruits of our labour. We chat and play together. We interact in an environment that is both realistic and yet far removed from reality, where our actions are crude and emotions stilted, our friendships superficial. Animal Crossing has taken the role filled by Monopoly in past generations, a product with a fundamentally anti-capitalist message that is subverted by the enjoyment of owning tons of useless crap. It’s a chilling metaphor for modern life, yet it also exudes the careless joys of childhood. There’s a lot to write about, that’s for sure.

A couple of months after writing a videogame piece, I’ll re-read it and often feel dissatisfied. The prose is banal, it’s full of clichés, it’s trite. My creative writing and personal blogging usually fare much better by comparison. The truth is that all games writing is still in its adolescence, and today’s prize winners are tomorrow’s toilet paper. That cringe I get when I read my own work is because our culture is moving forward: we’re having better, deeper conversations all the time. It sucks that my writing lacks historical permanence, but it’s great for the medium.

New Leaf doesn’t just represent a fresh start for a classic Nintendo series: we’ve turned over a new leaf in conversation, too.

This piece was written for July’s Blogs of the Round Table at Critical Distance. Join in the conversation!